As this project comes to a close it seems like progress is much harder to evidence. It's all little things and backtracking on bits that have been missed or could only be started when another aspect is complete. In particular all the hand rails on the carapace but also the last of the verdigris, which I'm hoping was just restrained enough to keep some of the metal visible. I know the verdigris is starting to be less reliable now, the paint is really beginning to break up when watered down. I've got me some Nihalakh Oxide to try but I can immediately see it's lighter than my current efforts. I've things coming up to practice on though soe we'll see how it goes as my current method is becoming less sustainable. 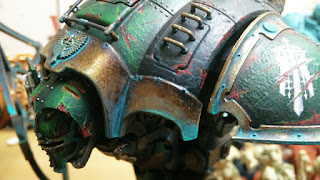 I also started the first of my glow effects - all Maccarius Solar Orange thinned down. There are far more of these 'vent' style things to use it on the Paladin than the Cerastus I may have done too many [y'know like how some Eldar players paint ALL the gems ;) ] but it breaks up the metallics a bit.

I'm hoping the top vents work better than the ones on the Cerastus this time around. Some darker orange to add, and some pure white and then it's pretty much done. 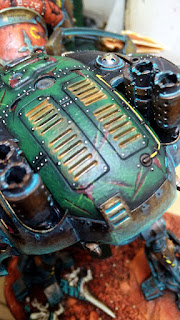 I added verdigris to the chainsword, you can see how much better a dark patina works on the darker bronze. A light verdigris will look quite odd... 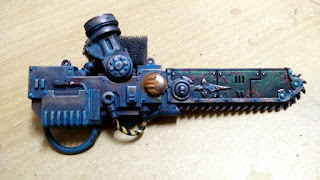 I also did the metallics on the missile launcher. Need to paint either chevrons or split 50:50 white and black, haven't decided which yet but it's not essential for my To Done at this stage. 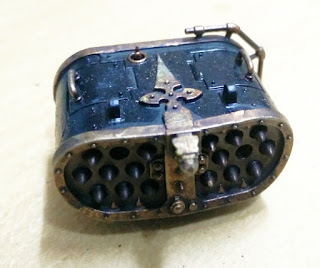 I've also brought the thermal cannon and battle cannon up to scratch, which leaves it like this:
Obviously some of the weapon options still needsome of the ticked off elements done but I just need the one configuration complete for AoP so I can move onto the other remaining elements. I can fill in the other options as I continue to work and further down the line as similar requirements [metallics, weathering etc.] crop up I can then batch them together. It's nearly done next update will have to be To Done! - BOOM!