The return of the lizard hide

My brother recently asked me to repaint the lizard 'hide' I painted for him in 2013. I should have taken a picture of it in the state it arrived, because it had abotu 50% of the Ferron Proxima red removed. I'd seen the vivarium it was going in so something more natural and hopefully durable was required. 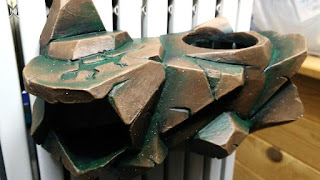 This time I used a grey car primer, followed by matt black car spray. I then over sprayed it with a moss green, trying to get speckles on it for some underpainting texture. 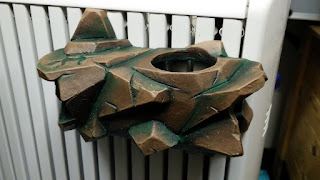 Then I pretty much obscured it all with some burnt umber art acrylic - a couple of coats followed by a shadow wash. Then I drybrushed it again, mixed a highlight and a second drybrush. Then it was a green wash in the crevices to tie it in with the moss green environment it's going to be in. 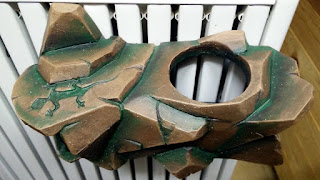 Finally I added a spray gloss varnish [which was really old and almost like silly string in places], then a spray matt varnish [also old, wasn;t very matt and did spit out all the little white spots you might be able to make out] and then three coats of brush varnish and hopfully it'll stand up a bit better to the litter critter. It's nice to do something different for a change.
Posted by 40kaddict at 12:18