I don't know what celestial alignment occured to get 5 of the hobby crew in one room but we only went and done it. Ben hosted Liam, Otty, PeteB and myself for a night of Kill Team, even more surprsing when you take into account PeteB has moved over to Age of Sigmar! So we set up on a 4'x4' playing the Supply Drop mission. 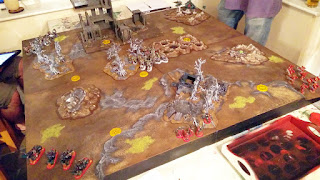 Ben chose the typically orky position of facing off against everyone in the middle of the board. Nobs on bikes and his tank busters. 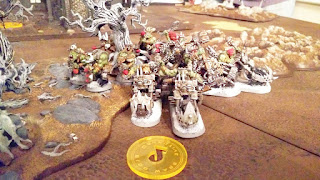 Otty brought his Inquisition Force and it was round about now he realised he'd cheated and brought a HQ - his Inquisitor. We let it pass on the udnerstanding that he would never live it down, forever! 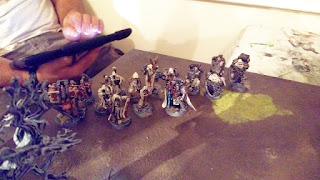 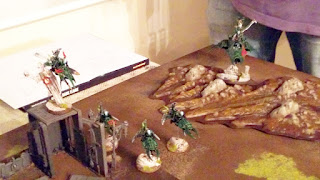 PeteB had some Chaos Space Marines hiding in a shoe box, next time I imagine it'll be Khorne Daemonkin. I brought four Ravenwing bikes and my Sniper scouts, with a Missile Launcher. 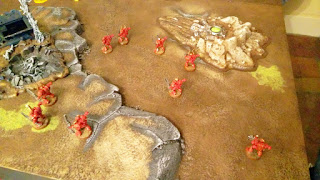 We rolled off for who went first, I think it was Liam, PeteB, Otty, Ben and then myself. Realistically it was a nightmare to follow what was going on for a coherent battle report. Pretty much everyone scored a 'first strike' [First Blood in their first turn] Liam took out PeteB's lone Missile Launcher marine in the tower next to him. PeteB picked up a valuable supply drop and we all seemed to target and kill a specialist so we were each 2 or 3 VPs up each by the end of turn 1. 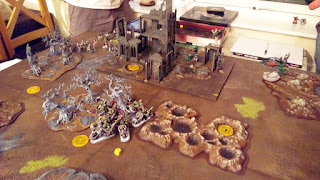 Personally I was able to take out the nearest threat to my scouts - the three Chaos Marines. Then I charged my Ravenwing at Ben's bikes. I'd killed one biker with the plasma gun then the Warlord charged his Warlord and was cut down in overwatch which thanks to Ben's Warlord trait netted him 3 VPs for almost no effort and left my army worse off than I'd hoped. Other amusing things included Liam's Venom getting stuck on a crater [or immobilized by Ben's bomb Squig] meaning his Incubi had to foot slog across the board. Otty's Servitors kept on getting mind-locked so hardly advanced out of their DZ 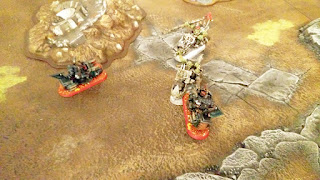 My Scouts remained pretty much steadfast for the game, while PeteB was morale checking quite early on. His shooting seemed to be always spot on but his 10,000 year old ammo couldn;t wound for toffee. While my Ravenwing entered into combat with an Ork biker, we had 3 rounds each at combat with me getting 1s and 2s to hit and then getting 5s for Hit & Run it was ludicrously comical. The deadlock was only broken by a Deathcult Assassin getting in on the melee and killing both parties! 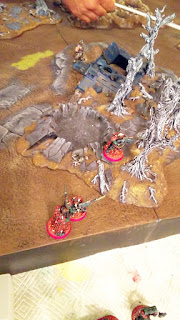 The end result saw Ben, who was currently out of reach on at least 10 VPs being tabled, so he was out of the scoring, with Liam also with no models on the board. We then got points for other forcess that routed or killed. Otty was the only faction not to rout so PeteB and I got 3 VPs each bringing us both up to 9 and Otty was on 5 but got 4 VPs for the other factions. 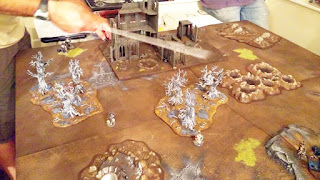 That left the three of us in a three way tie for first place with PeteB and I taking a moral victory as we did not cheat :) Bottom line we had an absolute blast and we were done by 11:30. A great night was had by all and although it;s crushingly bad when any model dies in this game it's also highly amusing. Everything is so valuable, the stakes are so much higher and although a 5-way game skews the game into weird territories I think it worked out OK. I'll look forward to our next game.
Posted by 40kaddict at 12:16