With the completion of the Land Speeders, with only photos to take, I'm transitioning to my next project, qwhich will no doubt be the completion of my Knight. However, I thought I'd go via Red Planet BASING the Genecult. With my patented process I keep thinking to myself about how they're in fact more orange than red and getting dangerously close to the ridiculous red-highlighting-to-yellow-to-white I used to do way-back-when. 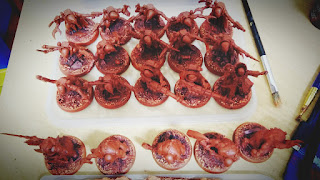 But, as I'm fond of pointing out on the Red Planet BASE! facebook group there is far more diversity in the Martian basing style than people give credit to, evidenced by the variety seen in the group. Anyway, there's still a lot to do on these bases. I have to pick out all the wreckage and debris, render those metallics and there are also various pieces of panels I can add more colours to to fit my original Genecult rubble bases. You can definitely see where I've tried to reign in highlighting the centre of the base [where a shadow logically would be cast] but I can still be over-zealous with the final Pumpkin highlight. We'll see how the extra elements break it up and then there's even the Bonewhite chips too... The rest of the models will be then on pause while I do the Knight but I may flit between it and the Aberrants when I get bored. The rest of the hybrids are compromised by all the various elements to paint but the Abberrants look reasonably straightforward once I reconcile the skin tones and mutations with Hive Fleet Gorgon's colour scheme. 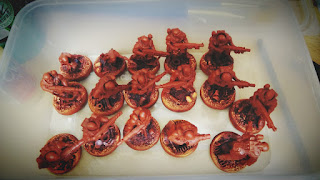 Prior to this I'd also finished my bike bases. These are now ready to drill for pinning the Ravenwing Black Knights/Command squad. 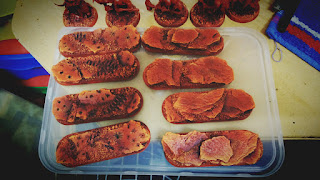 Lastly I finished up the Deathwatch paradoxically I'm looking forward to painting them but no desire to begin. The Knight is calling, it deserves completion and these Johnny-come-latelies are not going to interfere.