With the Land speeders in the bag it's about time the Imperial Knight got finished. It's been pushed ot one side for far to long, granted everything else were perfectly valid contributions to my armies and my hobby exploits but they really have been avoidance tasks. Which is odd because as I actually start doing more on the Knight I can literaly taste how quick I can finish this thing. Sure it's not goign to be done next week but it seems straightforward and certain elements once done - patina, will have a massive impact on progress.

Anyway, greens and highlighting the banner. 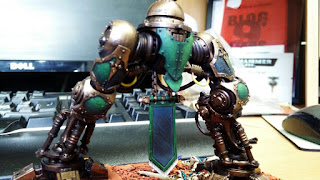 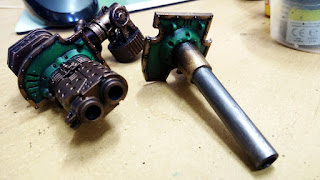 Carapace and the back of the banner, which was roughly dry-brushed to get cross hatched lines to make it look like fabric.

Pauldrons, I'll need to do all the battle damage before I do the verdigris. But before all of that - heraldry markings... 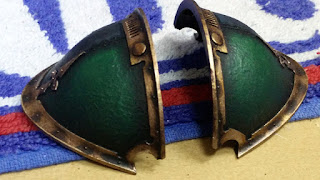 Choice of helmets, the one on the right is traditionally the Gerantius faceplate but I can't decide just yet. 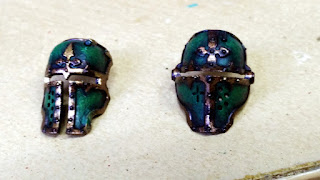 I gloss varnished the access hatch and banner for some decals 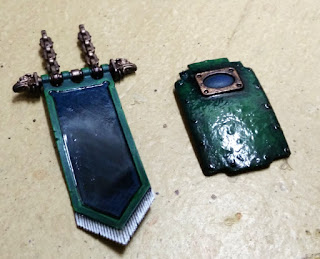 and I'm a little disenchanted with the results. 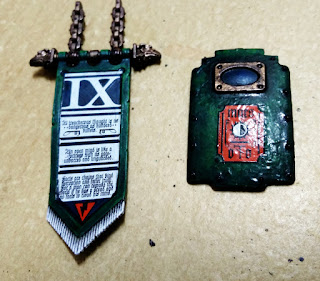 The construction mark has warped thanks to the decal softener. I did keep re-postioning it thoughso it's partly my fault. I just couldn't get it to align in the dead centre of the hatch with it's top and bottom parallel to the window and edge. I'm also dubious about the big 'red thing' drawing attention to itself on top of the carapace. Hopefully some battle damage will tone it down. 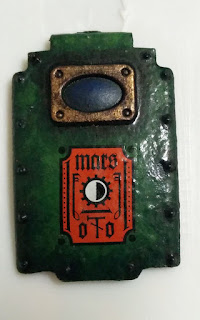 And this! Well I always assumed it fit in this side of the banner - it does not! I had to trim off the bottom and replace it with the triangle  to make it fit. Some shading did help but as soon as I applied Lahmian Medium on top, to tone down the glossy decal finish, it rehydrated the pigment and washed it off. I'm hoping some subsequent coats will help. 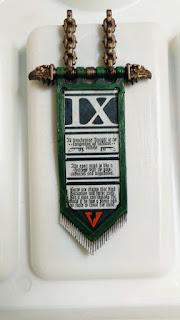 Bottom line the whole project has become a bit schizophrenic, flitting from visions of the 'the end is in sight' to 'couldn't care less'. I'm sure it's not helped by fatigue but it's becoming less appealing to do. That said the other night I was not going to work on this at all and managed to put in an hour or two and get one leg and the waist completely weathered. When I get the second leg done that'll be about a third of the model complete, which is awesome butt tempered by all the other hurdles yet come. I've no doubts on the painting it's just elements like the decals, I'm half a mind to do an alternative banner...