Onwards and upwards. Although the he knight seems to have become my majority focus, I'm still flitting between projects. Here I started to add in the texture on the bronze. I never quite know how I feel about this, the layers are pretty simple to do but the amount of it does make it a bit laborious to do so I end up wanting to just get it done. I also was a bit forgetful over the exact process, so I have the cerastus on hand to try and match up [of course I could try reading my own blog right?] 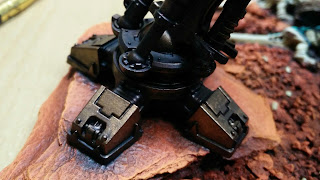 Although I'm not sure the technique is too important as I'm pretty sure successive stippling and a variety of washes will result in an impressive finish regardless. And any verdigris will most doubt cover up anything I never intended anyway! So at this point I add a little extra stipple/drybrush of Warplock Bronze to the shadow washed metal, sometimes I wish I could just stop here... 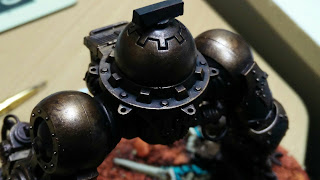 Next up was Balthasar Gold, that's the one on the left, the right is still to be done. 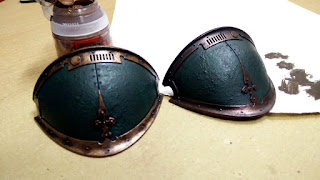 I then continued on the legs. Where I wanted a Brass colour I was more liberal and applied it neatly, elsewhere it's just a weathered highlight of the bronze so it was just drybrushed so it enhance the look instead of overpowering it.

Legs and shin guards were done.

The real advantage fot doing this aspect of the paint is it feels like you've reached quite an important milestone. Once the metallics are done that feels like at least a third has been dealt with, despite having not yet completed this part. But it feels like an accomplishment anway because I know it's such a big part of the painting. Once that's done it'll be
Which covers most of everything, no doubt I'll have to fit some other bits in and certainly some mettalices are still to be done - like handles round the cockpit but they have to bedone late rin the process.