Ben invited us roundfor a games night, sadly it was just PeteB and I that could make it but we had a pretty fun game of X-wing. He wanted to do something different to the usual 40k so Pete brought his new Force Awakens expansion and went Rebel/Resistance scum and Ben and I upheld the might of the Empire/First order I controlled the Tie Interceptors, Ben was the Tie Fighters. My Obsidian pilot was obscenely good, putting two damage on the A wing. He eventually blew it to pieces [do I get First Blood?] 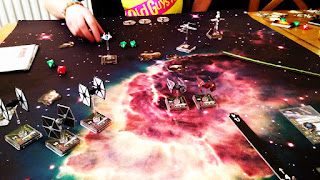 As the game progressed we all had to navigate round this group of asteroids in the centre of the board. The B-wing took aim at the Tie Fighter and would subsequently destroy it. 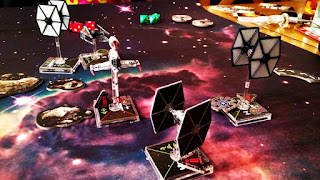 Mid way through the game and my Red Interceptor has just pulled a U-turn, which in all my experiences so fa has always proven costly... 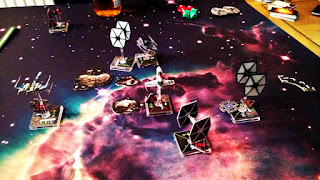 and so it was again as he was blown to pieces by Poe Dameron [well he has to have done something to jusify that 'best pilot in the galaxy' title!]/ 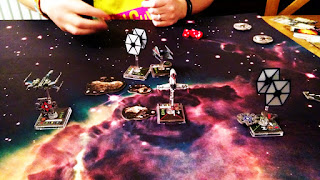 Ultimately it came down to Poe and one of the First order Tie Fighters, which was blown up giving PeteB the win. We then followed up with a game of Ticket to Ride Europe, which Ben won, all good fun, hopefulyl we'll do it again. 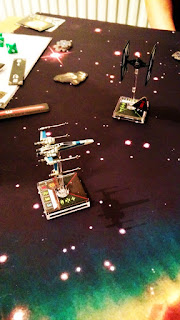 I also got to check out Ben's Red Planet BASE! for his new Mechanicum army, mmm looks like fruit cake. 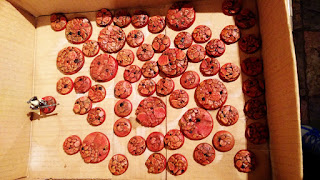 He'd been debating the design and eventually got there after looking at lava planets and the like. I suggested he just tone down the black, just use it as an accent colour to break up the surface - obsidian chips on the martian Earth. C'mon it worked for my wraithbone! I really love them and the resin bases look so cool. 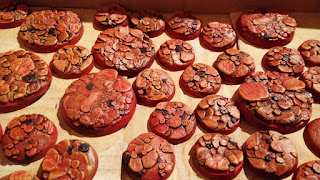 Here's his test model Skitarii to go with it. 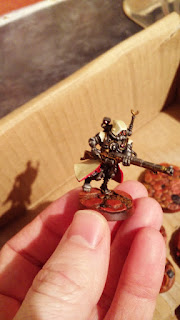