Aah, the opportunity to get back to some nid, welcoming me inot the Hive Mind's warm embrace!If I'm honest though, those chitin striations are pretty ropey though! Not to worry I'll probably be covering this with a lot of blood and gore so it doesn't really matter[unless it's brain matter!]. 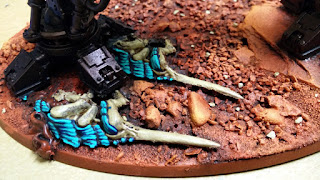 I did rather like the darker soft-tone washed bonewhite but it doesn't fit with my current lighter version of my colour scheme and the subsequent highlights do work much better. I've got to pick out a couple of those fleshy ridges on the legs and then a few fine highlights, pick out the hooves and any other odd thing but it'll probably all be covered in blood splatter anyway... 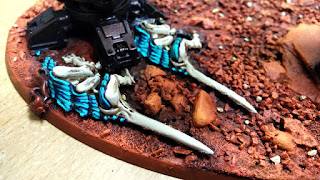 With the base almost finished things feel like they're progressing. However, with so much still to do and by simultaneously doing the same elements on various projects it's also a little overwhelming. It's a pretty bi-polar affair at the moment, pleased to have got everything shadow washed then depressed at the thought they then have to have all the metallics done - three or four lots of highlights with washes too, then weathered. Then I paint the coloured panels then add the battle damage and I have to do that for all the weapon options too! 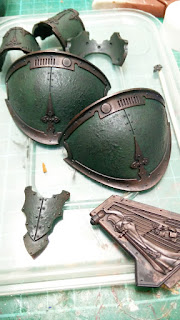 And all the time I'm doing this on the Knight the bikes and the jetfighter I'm thinking about my Tyranid VSG and the Dark Angel Tac squad that should be my number 1 priority. I mean I've finished my Azrael conversion and Dark Angels Company Captain but not varnished them - two To Done's just waiting for ten minutes of attention! To help combat this I've resorted to session planning - actually writing down tasks I hope to achieve each session. Actually achieve isn't quite right, these are just things I want to focus my attention on during the next session, just get my efforts in order. Which can be a bit odd for someone who refused to 'keep score' of their progress. Still, ever onwards.