If you saw the news over Christmas you'll know certain parts of Lancashire, Cumbria and Scotland got a bit wet. In fact Croston, a village just a few miles up the road was all over the National news thanks to the level of damage suffered. Croston is in fact where Otty lives but I think he avoided the worst of it. His wife was offering to care for other folks kids while they cleared any damage so I imagine that level of charity means you're not suffering as much.

For me though this was my garden, with it's impromptu water feature. There were some doubts but I was convinced the man cave would not be flooded and very glad of the base we had put down. This was the worst flooding we've ever had but from past experience we knew it could potentially happen. I think I'll be confident the shed base will overcome such a downpour in the future. 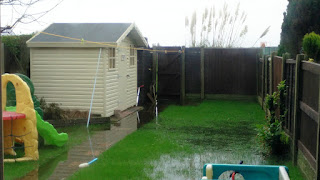 On the plus side the drainage of the field behind has been improved over the last five years so you can see just how much water receded over 24 hours after the rain stopped. 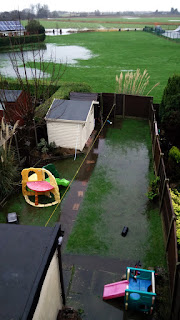 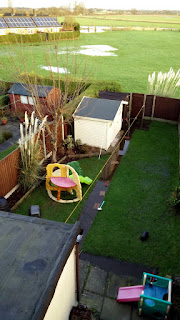 Of course the flooded path did provide me with ample opportunity to play with my new Christmas toy from my brother - an Orvibo WiFi enabled plug socket. Using the WiWo app on my phone I'm able to switch the heater on/off, countdown or set timed use. So I can pre-heat the shed before I go or just turn it on off and to keep the cold at bay. Prior to this I'd put it on early one day and by the time I went in in the evening it was about 27° C in there. Not only did I have to take off my jumper I was contemplating stripping off my T-shirt too! 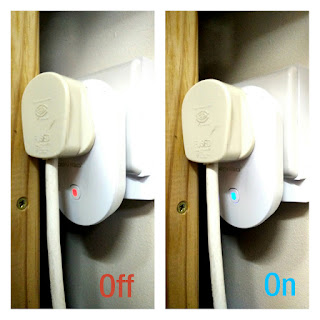 I also picked up a pair of Dunlop wellies, my Dad used to make these in Liverpool until they closed the factory. He spent a lot of time dismantling the injection moulding machines which were then shipped out to Portugal where these particular wellies were manufactured. Should the garden be flooded again I'm at least going to be able to get to the shed instead of playing hopscotch across some old roof tiles I spread out on the path while trying to avoid ending up on Fail Army [remember when that used to be You've Been Framed] 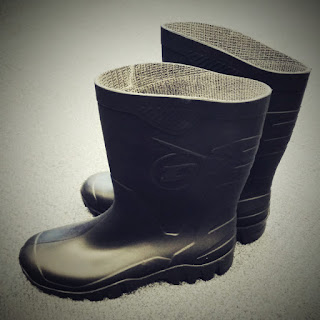 But the really big news about the man cave is that before Christmas I was devastated to discover I'd got mould inside. Just at the point where the right hand side of the computer desk and the other metal painting desk meet. There was also some mould at the back behind that little green storage box just visible on the floor. Now I'm pretty sure this has not come from outside, with hindsight I'm regretting using the old rug on the floor and when the computer desk was in the back room it was prone to mould there so I'm pretty sure I've brought the spores into the shed. In fact I've looked underneath the very bottom far right shelf and there is mould underneath it so I'm convinced I imported the issue 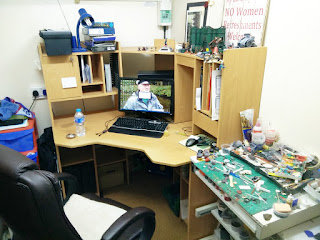 This discovery was deeply unsettling and I've since been battling an outbreak of mould every few weeks, luckily only in the same places. It's definitely prompted me to think about storage and access to those areas prone to outbreaks - corners and where the skirting boards would usually be. So I'll be looking to move stuff around when the weather gets better. I've also picked up some clear anti-mould paint. I will remove most of the large furniture, scrub it down with anti-mould spray and then coat them in the anti-mould paint. I'll also paint the bottom foot or so of the shed with the paint to further deter outbreaks. Lastly I'm looking to get an electric dehumidifier to help combat moisture in the air, currently I've got one of those moisture traps, which'll do for a couple of months.

The wife is quoting house-improvement guru Sarah Beeney and how it's ventilation that's the key, which is true but there are still drafts in the shed door and when I open it to go in/out that's also a lot of air circulation so I'm convinced if I can clear the majority of what's present and then put in place coatings to prevent regrowth then I may return to a sense of peace, otherwise me and Papa Nurgle are going to have some serious issues!
Posted by 40kaddict at 12:02