I had a game with Ben just before Christmas and before I knew it I hadn't actually taken any pictures so there wasn't much point trying to do a battle report thereafter. I did take few pictures, just because they looked pretty cool and sadly I can't remember much of what happened anyway. I thought I'd share the pics and try and recall some observations [such as they are]. We played a Maelstrom game, the one with ever decreasing amounts of objectives - from 6 down to 1 I think. The Orkses pulled out an overwhelming victory with VPs in the teens compared to my single digit score [or 11 at the most, I don't recall] 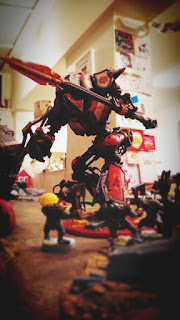 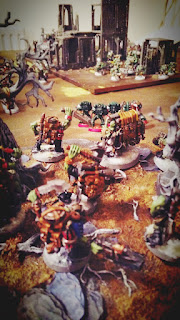 Ben drew some very helpful objective cards, usually the objectives already in his deployment zone and then compounded his success with cards that rewarded holding more objectives than me, which early on in the game was eminently doable. Typically my Bastion was destroyed once again, it's becoming par for the course now so I actually look forward to seeing it come tumbling down [I'll have to ensure I always take a crater with me]. 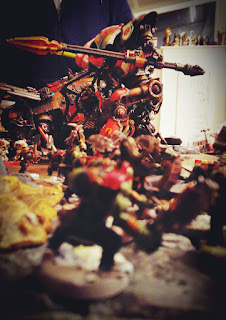 The Cerastus was a beast, he did almost all of my damage, loping about the field stomping on all and sundry. Ben's a bit down on the whole issue of Knights, in particular the way Stomps can remove swathes of models in one go. That said he did put 5 hull points on the Lancer [I managed to repair one with my Techmarine] so he scored an additional VP alongside his mission cards and was close to destroying the knight outright. As he'd destroyed almost everything else I don't think in this instance it caused an imbalance in the game but I can appreciate given it caused most damage to him it can be considered over-powered, although it needed it to balance the lackings in the rest of my list. 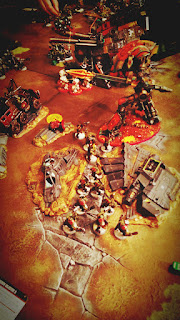 I did have one mission card to make 3 challenges, which I achieved but in the process lost a Tactical sergeant, drew another match up and killed and Ork with my Techmarine - win, lose and draw. And additionally my Ravenwing Sergeant was once again armoured with some mighty damage defying power armour. He saved out of his skin, much to Ben's annoyance, but I think did eventually fall to wait of Ork numbers. 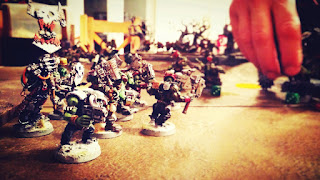 I'm pretty sure I had very little left on the board by the end, mainly the Knight and a few other models, I'd been overwhelmingly beaten ['crushing victory' I believe is the official term, aka twisting the knife!] but it was a good game and I really do like moving just one big beast around, it even makes me look at the Knight Gallant with Thunderstrike Gauntlet and Reaper Chainsword with fresh eyes. The weaponry doesn't seem to do half as much damage as when they get down and dirty and although Ben dislikes them in your face he did the most damage when I brought the fight to him. There's definitely a level of honesty about going all assault with your knight, although for the most part the Lancer fulfils that role too, without the shenanigans of a stubber and a big gun to line up different choices to assault.
Posted by 40kaddict at 12:15