Christmas came and went and I took a little break over that period so some of these will be catch-up posts. One of these isn't actually my post, as such, this is about my eldest son. Having visited the new hobby shop Wargames in Southport he'd been really excited [well I assume so, it's difficult to tell with a 13 year old] about the Batman Miniatures game. He pretty much earmarked his Christmas money in advance. So as soon as the festive holidays were over we went into Southport so he could sweatily part with his cash. He came away with the core rule book, which is really nice drawing on much of the exisiting comic book art, the Scarecrow and Militia crew starter box, Hush, the Arkham Knight and his favorite 'super hero' - Deathstroke [in the next picture]. 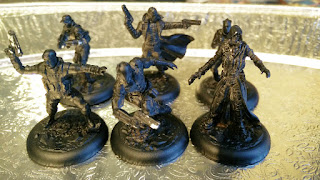 To help support his new venture I got the Joker box, I liked the idea od painting the prison fatigues and these guys all seemed a little odd which was, although I rather dislike the super tall stupid hat guy in the back left. I must admit that putting them together was a reminder of just how much I came to loathe metal miniatures and love plastic ones. Even just cover up the slot on the base was a chore with an evenings worth of Milliput effort :( That said I am communicating extensively with my son about where my involvement begins and ends. He is definitely painting his miniatures I'm presuming I will be doing mine. He's certainly more amenable to the process now which is refreshing. Next step is to create some terrain and a skirmish mat to use. My Print & Play buildings will suffice for structures and I've created a quick and dirty mat already which if I can get Illustrator to render the effects correctly might look OK but RAM is in short supply thanks to stupid Windows 7 32bit that we're saddled with. 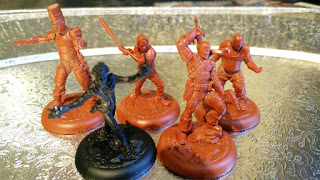 While I was at Wargame I bumped into Chris from Lost Boys [now the Merseyside Mammoths] not sure I've seen him since we had our battle [although he may have been at GW for last years Armies on Parade]. He's now jumped to Batman and had some interesting advice about expanding our force. I also picked up a 100mm thick pick and pluck Battlfoam for my Cerastus. Although I still need another to fully enclose the Knight and it's actually bigger than my GW or my Tabletop Tyrant Squire case it does fit perfectly inside the Powerplay Pro Metal Carry Case I got from Home Bargain. I mean the dimensions are 100% correct so if you picked one up then Battlefoam is definitely something to look at. As you can see I also took another couple of pictures of the store so you can get a sense of scale, it really is cool amd the wife was perfectly happy there, although she advises some non-hobby magazines might be nice for hobby widows ;) 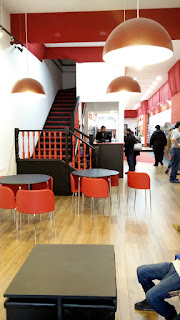 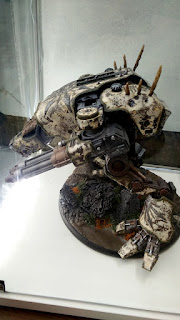 The display cabinets are also rocking some seriously cool models too. 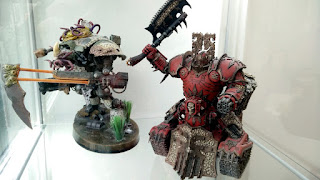 And at the risk of going overboard here's their own 'tour of the store'. Chris had mentioned to them my previous post, which they'd been grateful for but when someone starts a small business, whatever it may be they deserve as much help and support as they can get. High street retail is hugely difficult and especially something as niche as wargames and hobby supplies so fingers crossed Wargames will be here to stay.

Email ThisBlogThis!Share to TwitterShare to FacebookShare to Pinterest
Labels: Batman