With the Man Cave's case of Nurgle's Blight [which I've been keeping on top of and preventing outbreaks with judicious anti-mould spray applications] I've been a little down on the whole hobby room enjoyment but I realised in part it was becaus of how untidy my workspace was. I'm untidy at the best of time but the apathy and constant shifting of the paint table meant I just didn't care. The fact is I sit facing the computer anyway so the paint space is irrelevant. It was annoying me though and depsite not wanting to sacrifice a good deal of hobby time rectifying the situation I arrived at a moment where that was possible, because there really wasn't very much else I could do in that time. 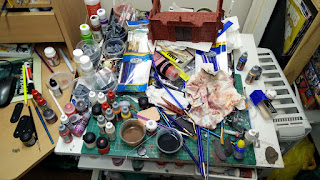 Now some would say this isn't much better, and I admit since this picture it's begun to deteriorate yet again. However, I cannot underestimate the feeling I got from this experience. I'm sure there's a single word, like schadenfreude, untranslatable from another language that would explain the feelings I had whilst doing it. It's a sensation I've had numerous times before of 'rediscovering something long lost, like a memory from childhood', it's a peculiar mental process that then evolves into an emotinal one, not unlike losing The Game [Tom Widdows]. It's quite a nebulous emotion that when I feel it I keep reaching inside to capture why it make me feel that way. 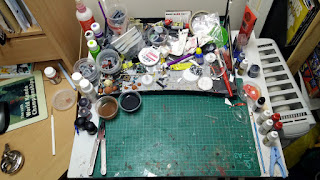 Of course that all sounds like a whole load of nonsense but this is the hobby slump time of the year and I'm trying to harvest positive feelings when everything else is seeking to drag me down and stop progress - and yes I've been struggling with that due to:
They've all combined to sap will and its worth me noting that a simple tidy up has done wonders to my psyche, so I best keep it up and not leave it so long next time.
Posted by 40kaddict at 12:04