We've got a European Ticket to Ride

Father Christmas was very keen to reward my first born son with a board game and he wisely chose Ticket to Ride: Europe. We had opportunity to give it a go as a family, on first glance the rules seemed quite complicated and decided my wife and youngest would team up, which in hindsight was a mistake as the rules are actually quite simple. In truth I think it's potentially the easiest game we've got - compared to Pandemic and Catan. It's really easy to setup and essentially amounts to a card game with some board mechanics with a train theme. This was me [yellow] trailing early on to the wife [black] and the boy [green]. 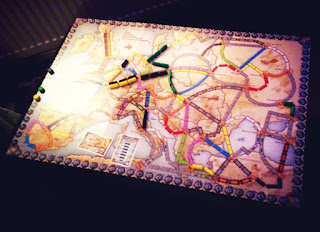 Of course things change by the end of the game and thanks to comnpleting all my tickets, creating the longest train and not using any stations I steamed ahead by the end. There was actually a few more points to add taking me well over 100 points 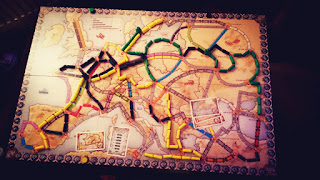 We had another game a few nigths later and the boy managed to whoop all of our collective cabooses making nearly 120-130points! I highly recommend it and if you need anymore convincing why not check out the awesome Wil Wheaton in his Tabletop episodes of the original and Europe version, it's why I advised good old St. Nick that it was a gift worth receiving.