Nipped into GW to pick up a Knight base the other week and took a few photos of the models that interested me in the display cabinet. There was this green and orange Maleceptor which made me actually like the model, not enough to buy one obviously! The rules just don't appeal to me, I just can't bank on the randomness of the 'Psychic Phase' [aka the disappointment phase] so investing in this both in £s and pts especially when this is smaller than but more expensive than a Tervigon to buy. 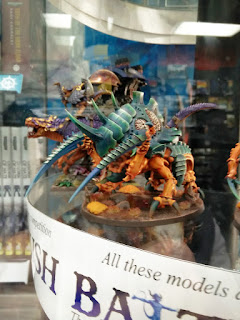 The same painter also put together a Spawn of Cryptus which was equally nice. 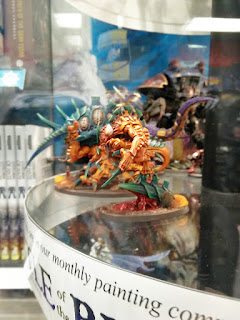 But this conversion of the Spawn was really clever, utilising it as a base for a Tyranid Prime! 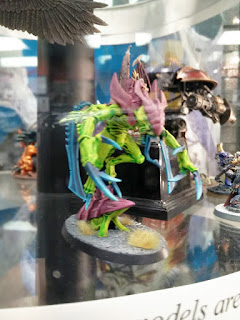 Had to get this fella on 'film' for you all as I knew it was such a killer idea, shame the kitbash is probably more expensive than the standard option.I suppose it does allow you to keep the three Warrior brood intact without sacrificing a model to become a Prime though and if you don't run Genestealers then maybe the spawn would be redundant anyway and the Deathstorm box does provide all the bits to achieve this. 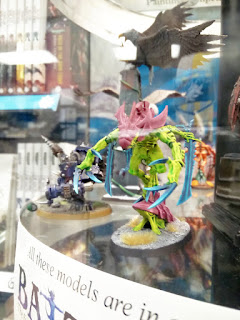 Lastly some of the nice new AdMech models, I certainly prefer the Cult Mechanicus theme and kits than the Skitarii. I remember reading that Skitarii were more 'techno-barbarians' than the steampunk we seem to have gotten. So I'd definitely go cult first if I was going to invest in another army [which I'm not] and then if I wanted Skitarii I'd do some crazy conversions from Warhammer Fantasy models, that's if they still exist in the near future! 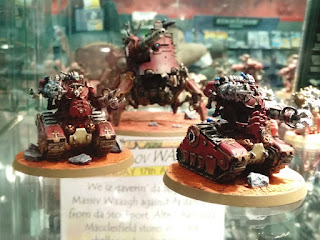 I thought I'd share this too, it's the 'shed' I'll be getting in a few weeks to move my hobby into, although mine will be 10' x 6'. It's an expensive to do, but it will free up our back room to become a dining room and more importantly remove my 'crap' from the house 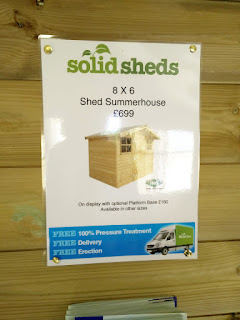 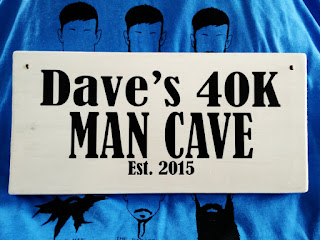