Saturday and Sunday at the GW

Nipped in the local GW on Saturday and had a nice chat with Stuart the manager and he advised us amongst other things* to come down the next day and have a battle. 500pts, HQ and two troops. Come Sunday morning we took a Tervigon, with all the trimmings, 22 Hormogaunts and 7 adrenal stealers and their Broodlord.

Setting up we had two kids turn up and they pleaded to have a three way battle with me and the nipper so Stuart set up the 'broken alliance' scenario but I could see that our 500pts against 500pts of Grey Knights and 500pts of Ultramarines would result in two against one. Anyway, it was objective based so it didn't really matter so long as me and the nipper could control of what was there, the 3 little door effigies [you can see one just poking out of the terrain below. 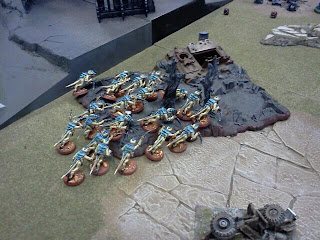 We won first turn and they didn't steal the initiative. The rules of broken alliance are that in the midst of a treaty talk things break down and all out war ensues so first turn each unit rolls a dice and 1-3 they can act as normal 4-6 they're so confused they do nothing. So our Hormagaunts passed and ran 6" into the area terrain on the left in an effort to secure that objective. The Genestealers were happy hiding in the ruin, they immediately secured the second objective [the third was just the other side of the ruin in front of them. The Tervigon meanwhile was confused and sat on it's haunches wondering what it would be having for tea later on. 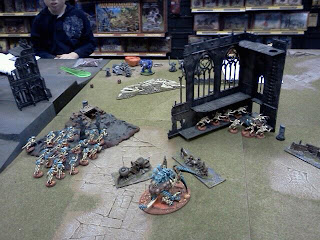 The two kids rolled for who went second and third with third place automatically getting first turn in the following round and the remaining two dicing for who went next. Over on the far corner the two Ultramarine tactical squads deployed in this fashion with their Librarian at the back. Unfortunately the two tac squads were confused and the Librarian just wandered about a bit not in in range of anyone. The Grey Knights stepped up and shot holes in the Hormagaunts. Massed storm bolter fire, psy-cannons a cyber eagle that never did less than 5 attacks on D6 throughout the entire game and the multi-melta and storm bolter of the dreadnought wittled them down to 17 by the time they had their last turn of round one and their first turn of round two. I think the front squad Ultramarines moved off the hill towards the ruin, whereas their Plasma Cannon armed brethren fired on the Grey Knights but the blast deviated wildly off target. 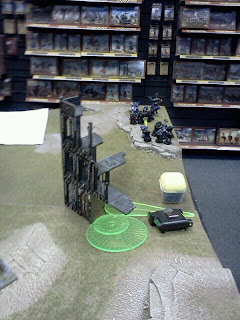 Now that the Tervigon had finished it's supper plans it remembered it had some Termagants to spawn and promptly pooped the golden 15. 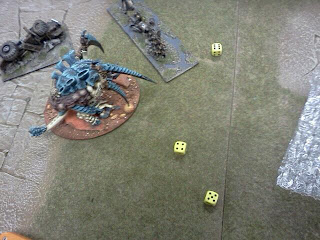 And this is them now, freshly gleaming and full of gunk and goo. 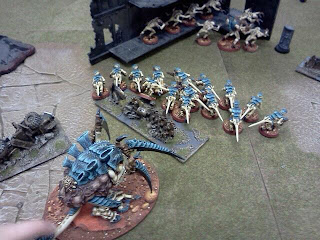 The Hormagaunts secured the objective, the Termagants moved up hiding behind the building for next turns reinforcements and the Tervigon stepped into some cover just in synapse for the Hormagaunts. Meanwhile the Genestealers rolled to see how far they'd  move in cover to see if they could reach the now exposed Tactical squad 5", that'll do followed by a run and next up it was gobbling time. 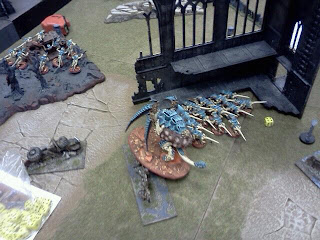 The brood ripped through the marines like they weren't there and then consolidated into the building to have some cover. Which then ended the last turn, new round and as we went last we were now first. I was pretty sure we could do the same trick, move through cover and assault the second tactical squad and wipe them out but I didn't think it'd be fair to the kid with the Ultramarines. They'd not done anything so far and to wipe out his squad in two turns would have been mean so they stayed in the building. 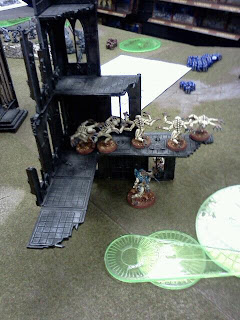 Another ten Termagants were spawned and they joined the depleted Hormies in the area terrain. 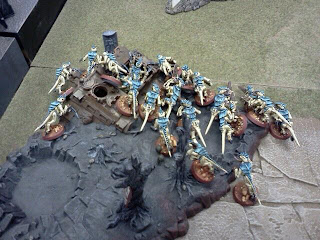 The Grey Knights all stepped into range and blasted away with massed bolter fire thinning the Hormies down even more and leaving but three Termagants in place. Meanwhile the Plasma Cannon took out a few stealers and more bolter fire took more down. In the end just the Broodlord and a a pair of adrenal stealers remained. 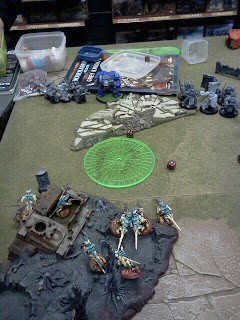 Next turn and with the kids getting a bit antsy having to wait for two people to have a turn before getting their go it was time to take the fight to the Grey Knights. Another 8 Termagants we spawned. They gnawed their way 5" through the ruined building. Emerging from holes and laid a withering hail of flesh eating living bullets into the Knights but only one of the tenacious grubs managed to bore through their ornately carved armour. 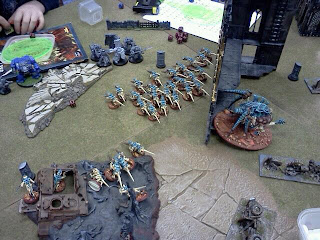 With the Tervigon urging them on the Termagants swamped the Grey Knights. What ensued wasn't pretty, some erroneous stats recall on behalf of the Grey Knights Codex meant we did much more damage than we should have done. I tried to convince their commander to check again but he was adamant they had a WS of 2! However he also said they had an initiative of 8 so by the time the termagants got a look in 10 had already perished. In the end one knight was poisoned and two further wounds were caused. When it was revealed their initiative was in fact only four and the Tervigon's adrenal glands gave the Termagants initiative four also the recently deaded gants attacks were added into the mix but failed to do anything. I think by this time all the kids were losing interest, hence the mistakes taking place. 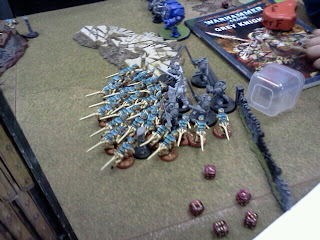 Over on the other side the remaining Stealers decided it was time to fight back. They tore through the secons squad. Five more marines fell to their rending claws... 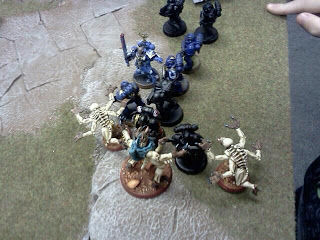 ... and as they broke and ran 1" the stealers dragged down a sixth marine as he tried to escape. 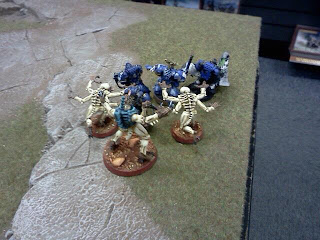 In Conclusion: although the kids think it'll be fun to have a three way battle it does involve waiting for two people to have a turn before you get to have a go back. I think they were all getting a bit tired by the end. My nipper was starting to get bored, mistakes were happening and things may not have been going to plan. Fair play to them they behaved really well and it was a fun game. The three way didn't really materialise, ythe Grey Knights weren't really threatened. With hindsight the Hormagaunts should have just charged the unit in front of them. I don't think they were anything more than power armored knights so they could have done some real damage with their 30 scything talon attacks. The 3 remaining Termagants could have secured that objective, which won us the game. We could have done much more damage, but we stuck to the objectives which was the ultimate prize afterall even if the Hormies were just wittled down and never got to assault which was my reason for running them!

Overall I think 'nids excel at these small battles. Its only when we go bigger we struggle as we need a slightly different force to capitalize on the extra points. The Stealers were back on form but I really saw some advantage for adding scything talons, re-roll 1's would have come in handy. Hitting 2 out of 3 times with a further chance to increase that to 5 out of 6 may be worth the extra 2 points each, it certainly benefits the Broodlord. Perhaps in a 750 or 1000pt force I may take them.

Anyway, next weekend is the 40k anniversary at the store so we may be back again and tonight is gaming night so it's all much fun!