Ravenor: The Omnibus - a review 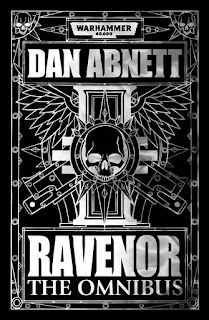 The problem with my book reviews is they tend to come a significant time after finishing the book so quite often I've forgotten the names of people and even the plot sometimes but the overall impression is there so hopefully they're still of value.

Anyway I borrow Ravenor: The Omnibus

from my local library, they actually had two copies! After recent disappointment with some Black Library books this was something else. If you want a novel that describes the 40k 'grim dark' universe then this is it, or three! There's three books in one with a couple of short stories too and the omnibus collects them together so you can experience the sprawling story arc in one handy volume. Typically the thing that attracted me most to this was the cover. Annoyingly the trilogy of Eisenhorn novels that precede this don't come wit such a cool cover and with Dan Abnett suggesting in the Foreword that there is another trilogy yet to come it would have been nice to have a similar set of books with such iconic imagery on the front in different metallic colours. Still, nevermind.

The books start much like a great action movie, straight into the mix, very little preamble and then you would assume there would be a title sequence and the book begins proper. It obviously follows Inquisitor Ravenor and his inquisitorial team. I won't go into too much detail but they all seem like total bada$$es, with special skills and experiences to do untold damage. Slowly though, throughout the omnibus you begin to discover their weaknesses and flaws and the nigh invulnerable people we met at the beginning are very vulnerable by the end. I guess this is testament to Mr Abnett that the heroes of the piece weren't made invincible. Obviously in the beginning you can do what you want to them, we don't know them and you can get away with anything. From then on you get to understand their character and the preconceptions can be stripped away so we can be frightened and worried for their safety.

I won't go into the plot, I'll just say this restored a lot of faith in the books coming out of Black Library. It conjured up quite a few new vistas and imagery about 40k and in particular Hive Worlds as some twisted dark Blade Runner-esque environment. Rotting and festering under acid rain - awesome scene setting. Overall it feels like one of those awesome Role Playing games you had with your mates. A bunch of highly skilled operatives each with their own look, skills and personality set on an adventure. This is utter class and if you don't have it in your life, then check your local library, they may just have a copy [or two!]
Posted by 40kaddict at 16:21