After last weeks success comes kharmic retribution. I arrive later than most of the other guys due to getting back from work and having my tea and so the games are in full swung when I get there. I also had the chance to car-share with another member who lives round the corner from me.
This week it was a 50:50 split between Warmachine and 40k and for the first hour or so I watched Peteb and Rob go at it, Eldar [mostly Wave Serpents, Night Spinners, Guardians, Fire Dragons, Striking Scorpions and an Avatar] versus White Scars [bikes, bikes, more bikes, Land Speeders and a Dreadnought in a drop-pod]. It was interesting to watch and fun too thanks to some good tactics and disastrous roles, but then that's 40k all over.
Eventually Roy, the club treasurer, finished his game and although I'd brought a 1000 and a 1250pt list to not worry about time constraints I agreed to the 1750 list I made last week so he could continue to run his Imperial Guard army he will be using at the weekend in a competition. Once he said that how could I refuse, he needed the practice ;)
Spearhead, annihilation was the setup which I won to deploy first. Bearing in mind this is the first time I've done this deployment, faced guard and run an army of this size I expected it to be tough. As you can see below the Tervigon, Zoanthrope, Biovore, Hormogaunts and Warior brood occupied this cover, Gargoyles and Sky Slasher swarm to the side and Trygon and Devgaunts in a Spore waiting to deep strike. 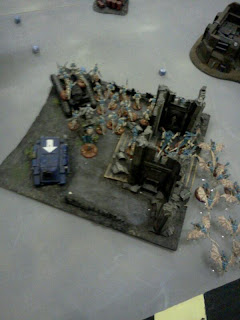 ﻿And here's the challenge they faced [all new to me] 2 Executioners with Plasma Sponsons and hull weapons, a Demolisher with HBolter sponsons and a Hull Weapon 2 Vendettas [I think] with Vet squads inside, a Rough Rider squad and a 30 man squad with a Commissar tricked out with all sorts of gizmos in the ruin top left [not to mention the 2 or 3 Heavy Weapons Squads hiding with them]. You may also note the 11 toxin stealers infiltrating in the ruin opposite and the 11 adrenal stealers and Broodlord in the structure top right. 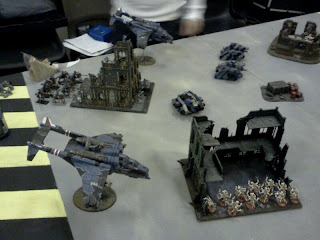 So, set up and ready to go, by the way don't worry it's not a full battle﻿ report. This was how I was about to begin turn 1 until Roy stole the initiative. First blood went to Roy, I think it was a single Hormogaunt or stealer and then he started target practice on the Hormogaunt brood with a Leman Russ Executioner. Thankfully I made quite a few cover saves but I think by that stage another five had returned to their biomass state. The other Executioner targeted the toxin stealers and what was left was shot in the back by the Vendetta, so much for infiltration! I think a couple of wounds may have spotted the tervigon and the Zoanthrope but a short and decisive turn one left me reeling. 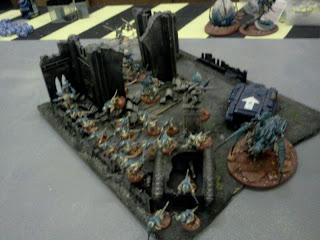 This pic may be my turn 2 so bear with me. The Tervigon spawned 8, double 3s so pooped out on turn 1. The Hormies bolted for the cover in the centre, pretty much all my weaponry was out of range, so everything just moved forwards the biovore being the only shooter and missing the guard heavy weapon squad at the front of the ruin the spore mine floated next the Executioner and popped harmlessly on it's side armour, without even marking the paintwork. I think the only joy was that the adrenal stealers waltzed through their terrain and got up close and personal with the Executioner and in a wild frenzy ripped the plasma turret from its hull and knocked it about a bit 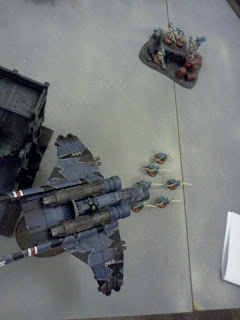 At this stage Roy had so much firepower to bring to bear he was throwing all sorts of heavy shots at even the weakest of targets just because he could, an embarrassment of riches one might say. I think he whittled down some more of my squads and I also had a turn where my remaining stealers continued to scramble over the Executioner seeking a way to get inside for the fleshy pink stuff. In doing so they pulled off a heavy flamer, at least Roy was gracious enough to point out I should thing very carefully about which weapon to destroy. With hindsight the stealers would have been better served assaulting the veteran squad the Vendetta dumped in their laps which proceeded to pepper them with las and plasma fire, which scored me my first kill thanks to a hapless guards plasma gun overheating [in fact every plasma gun overheated every shot they took, although some survived to nurse their scorched fingers]. I also moved the warriors into the building and Gargoyles and sky slashers separated so they weren't al bunched up.
Of course when Roy did fire his Plasma sponsons from the Executioner they only went and deviated from the Gargoyles and landed right on top of the Rippers, vaporising one base instantly! 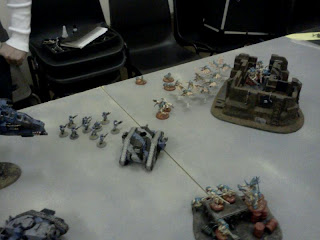 At this stage I was feeling the pinch, I'd done practically nothing, the Termagants were all gone, the Tervigon was down to two wounds, the bonesword Prime was gone and only two Hormogaunts were left and reverting to their natural instinct, which involved trying to get inside the nearest Executioner! The only respite came with an explosive thud a mass of seething tentacles slammed into the ground where only a few moments before the rough riders had been. Out of the spore pod Termagants boiled opening fire with their Devourers on the brave war horses - writhing parasites eating through the horseflesh with much gusto. With unthinking frenzy the spore pod lashed out with it's tentacles knocking the Executioner around like a plaything but just leaving the crew doubly stunned. By this stage there was still no sign of the Tyranid Prime and the Rippers and Genestealers couldn't finish off the veteran squad. [I think the stealer and broodlord may not have made it]. 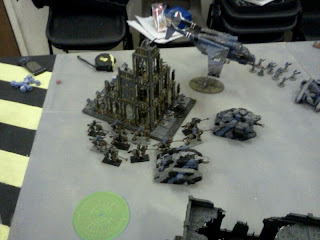 ﻿Now at least I got to experience a spectacular loss. I've no shame in that and Peteb's army list last night was one he thought could return a victory for him in case we played and therein lies the challenge for me. To find an army list that I could run that would get me a victory against Roy. However, I'm not so sure we have the figures to do that. Outflanking wouldn't have solved the problem and I'd have had a 1 in 3 chance of the reserves coming in so far away from the action they may as well have been dead. One could say that losing the initiative was the tipping point, in which case I was screwed from the beginning and that's the worst possible conclusion, how can you play in such a way that at the very beginning if you don't get one dice roll in your favour you lose!
In fact the more I thought about it the more I realised that if he hadn't have stolen the initiative I may well have been in even more dire straits. Instead of being in cover most of my 'nids would have been in the open and blown to smithereens. Even then what were the hormogaunts going to do to the Leman Russes? It wasn't dice rolls either, I had some really lucky rolls and Roy had some unlucky ones. I certainly don't think spearhead is a deployment that my current list benefits from, too much bunching ripe for blast templates. The loss of the toxin stealers was possibly the hardest thing to deal with and the devgaunts were MVP, though that wasn't tough, the biggest issue was the Leman Russ armour in that these were 11. As much as I see stealers and Broodlords capable of tank killing, especially with adrenal glands, that's based on Marines and their Rhinos and Dreadnoughts [Land Raiders can be targetted by the Trygon]. Just that extra bit of ferro steel was enough to blunt my stealers claws.
So what next? Well I have to control reserves, which means the Hive Tyrant, with Hive Commander which also gives me the venom cannon, sure it's damage is limited but if it can get a rear shot [how?] it would open one up. We could go Ymgarls and more drop pods? They had a better chance of slapping the Russes down, put the Zoanthrope in one and you've even better chance. Maybe it's time to paint those plasma hatchers...
What I do know is that that 'nids can be great at low points battles, you get a lot of bang for your buck. At higher points maybe other folk can bring a lot more to bear and certainly with the figures we've got options are limited, and with the club holding a Saturday tournament at 2000 pts I could be opening myself up for a whooping.
Posted by 40kaddict at 13:30