There are two great guides to painting freehand Dark Angel symbols and I did a bit of both and added a bit myself after finally deciding [YES I can make a decision eventually] to go freehand, first the two tutorials you should read if you want to get all unforgiven!
Here's how I started, with a simple pencil crayon sketch first, I did the sword first then wrapped the wing arcs round it then added the feathers. One thing I didn't want to do is cut back into the design, it was a one pass shot and each bit was to be right first time, in direct contrast to the two tutorials which work on simple shapes first. 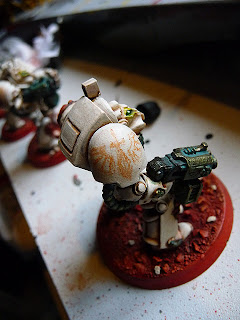 The battle damaged terminator and how I was going to paint around the scarring. 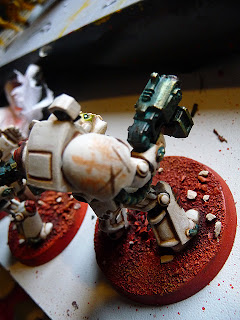 At this point I see the advantage to Ron's guide in that by making the wing arc first you can guarantee the tip feathers are both level, mine tip up a bit and one badge has a flat wing and an upturned one, still it's hardly noticeable. Mechrite Red is my weapon of choice for the colour, thinned a bit and I'm so pleased with the results I don't even think I'm going to add any highlights, the mixed opacity makes it work all by itself. 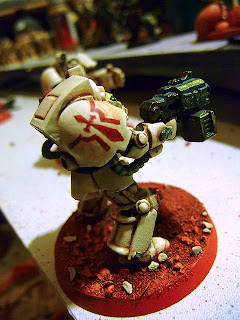 Following on from the top and bottom feathers it's simple enough to but the two middle feathers in place. Just do one line, then the next and you will then have an idea of where to but the next strokes to thicken them up and balance each feather with each gap. Finally a simple cut-in of Bonewhite to make the zig-zag in the broken sword [the worst bit actually]. The first one I did seemed to take ages. 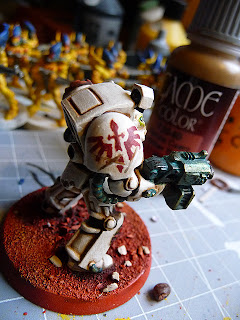 And so I planned to do the remaining four in two sittings, with the first two taking me over halfway I could feel happy about finishing off the last two and not get antsy about the whole process. Somehow I got the first of these done in around 8 minutes - still a lot of time one might say which is why I get agitated - a lot of time spent painting very little even if the results look great [or at least I think so]. 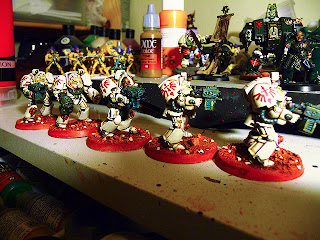 So all five were complete in under an hour, and other bits and bobs got painted too. As a production line I think doing the sword as step one on all the miniatures, then doing the top and bottom feathers and finally coming in last to put the middle wings is the most efficient way to do it. Your hand gets used to what's expected of if and it's easier to repeat the process X5 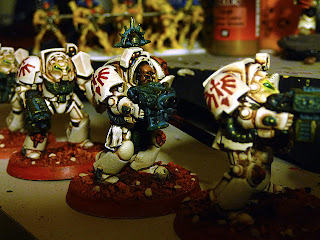 And somehow the use of the orange pencil crayons adds to it in a way, or at least doesn't detract enough that I feel I have to paint out any of my guides. Still to decide on the heraldry and I actually fancy putting the original Deathwing tribal stripes on side of the terminator armour. But overall I can't believe they came out so well. There is something to this freehand mullarky. It is labour intensive and the area painted is so small but they're all starting to come together now because of it. I'm much less apprehensive about doing the same to the Tac squad, but their shoulder pads are a little bit smaller so I'm still slightly concerned.
Posted by 40kaddict at 13:06