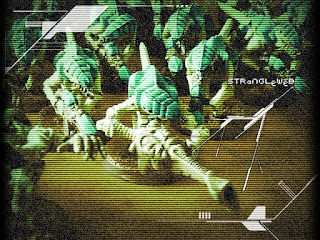 OMG, and I use that phrase sparingly, but is that a Strangleweb before me or have you just been very happy to see me? Sorry, I'm getting ahead of myself. So with my new free night it was chance to nip along to my local friendly neighbourhood gaming club. I'd actually been a bit giddy with excitement for the past few days, sad I know but compared to moping about my lost kendo activities I'll take it

I'd been chatting on their forum for a few days, had a 1750pt list to take which is by far the largest I'd ever had. I must pause at this point and admit I may have  been deluding myself for a good few months that my Son's 'nids are just his 'nids. I bought at least half of what he's got, painted it and I'm actually quite interested in them. Meanwhile he's moved onto his Eldar. So in name they're his but I personally see them as a shared resource until I've completed the Dark Angels.

So I arrived about an hour into their schedule, with six tables, three of which running Warmachine, two running 40k and one running Dystopian Wars. The tables were made up of three 4'x2' sheets of MDF, painted a variety of hues [two of which where orange Martian landscapes :) ] and had a significant amount of painted scenery, mainly GW's range of buildings/ruins together with some of the rarer terrain items. Overall I was impressed by the sheer quality of what was on offer and just quite how busy it was.

I had a nice chat with the Chairman of the club, lots to go over and eventually got a game with 'Peteb' who lives in the same town as I do and had already 'offered me out for a fight' on the forum. With time a little short we ditched the 1750 list and I looked for a 1000 pointer and somehow ended up with one of the first lists I ever drew up for my son [slightly amended]

Peteb's list involved
I won't go into too much depth but first blood went to Peteb with a couple of Genestealers falling foul to missile fire. Overall though my superior numbers were just too much. regardless of the lack of biomorphs to enhance th swarm it was just too many dice in the end that swung it. The non-broodlord stealers took out the jet-bikes with for around half the squad. The other brood was taken down byt the Scorpions but the Trygon ate them all up. The Gargoyles did really well ousting the rangers from their cover and then attempting to use their blinding venom on the Wraithlord - auto wound on 6s!

Standout was the termagants though, they had 5 fatalities but their relentless shooting and eventual close combat with the Harlequins just proved too much and they couldn't dance out of that one. Best of all the Strangleweb was fired and managed to stick one kooky Eldar to the ground, although explaining this weapon proved embarrassing but much fun. The game was conceded with just the Wraithlord, the Wave Serpent and three Rangers.

So in conclusion for the game I was particularly surprised at how effective a bog-standard set of 'nids could be. No biomorphs and they did really well. I guess a gant will die just as easily with toxin sacks and adrenal glands and having 40% more figures makes up for the reduced aggression and killing skills. On the downside  Gargoyles are a frikkin nightmare to move as they keep coming off the flight stands and having so many figures is a real pain in the ass to put away. There were a few times I wistfully looked over at the Warmachine guys with their few dozen figures.

As for the club, I'm really looking forward to going again. Not sure quite when it'll be, definitely in a fortnight maybe next week. I'm also keen to move some of my other projects forward I'm a tad ashamed of the fact I may be co-opting my son's 'nids. I like playing them though but I really should be running my own stuff. I've realised I've reached another empasse though. I need to do some more bits so I've got content for the blog and I need to get back on track with the 'to do list' so I have completed figures. Hopefully this is the kickstart to it, I've something to aim for now!
Posted by 40kaddict at 23:58