As I make some progress with terrain, Deathwing and other bits and pieces I also decided to get some paint on the few faces that are 'exposed' on the Assault on Black Reach figures. 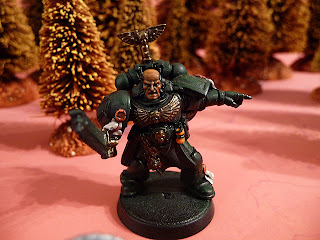 Ultimately I'm trying to continue to do dark skinned marines based on my Dark Angel genesis 3 figure. This is my attempt to capture the 'native american' fluff that the Deathwing was original famed for and fits the landscape fluff of Ferron Proxima with its red planet desert environments. 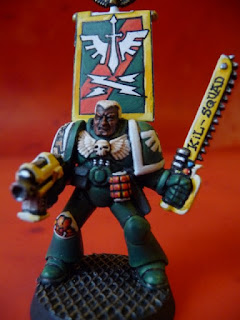 This tactical squad sergeant is coming along nicely and I'm really loathe to put anymore highlights on the green now. Orkhide shade with Badab Black wash and it's actually where I want it to be and all the other details just pop because the armour colour is so dark, although it looks much darker than under daylight. 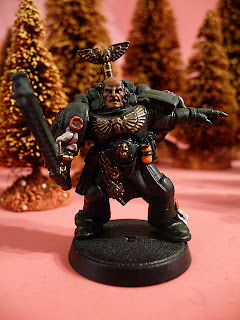 Company Captain has had his skintones done as well and there is some initial [very] rough highlights on his cloak and tabbard. Really I should go lighter on the next set of highlights but I like the dirty brown, although it needs tidying up, a lot. Initial colours on the power sword too. Thinned Vermillion with a Badab Black wash, more shading to come and then some lightening FX. 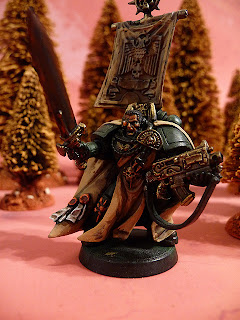 Back to a shot on a black background and in daylight so you can see the green isn't quite as dark as the above pic. The other big question is whether to do the verdigris effect on all the bronze to match the Deathwing [pictured so you can compare the two] I like what I've done on the tac squad already and think the contrast between the bronze and the green would removed if some turquoise was introduced. I'll know better when I've painted all the guns to attach to the rest of the squad... 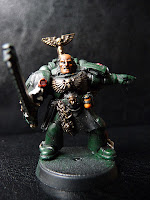 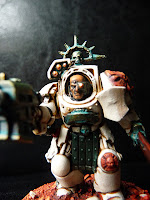 One more decision - how about some tribal war paint? Not to mention do I paint the eyes [oh G.O.D. don't let me make that decision!]
﻿
Posted by 40kaddict at 13:05