Back in April I shared my idea for Belial and as the first Deathwing squad is approaching something close to completion I though I would turn my attentions to him in an attmpt to finish them simultaneously. First thing first was the height difference from this ancient miniature. As he is shorter than the Assault on Black Reach terminators I decided he needed a bit more base! I got to use my Dremmel and rout a slot into a piece of slate from the garden, this has then been Vermillioned! 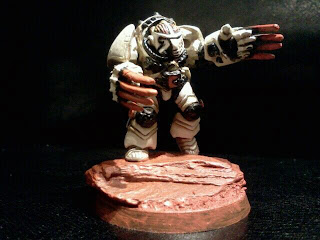 I'm going to redo the lightening claws to fit the same style as the current force weapons I'm doing, both on the Terminator Sergeant and the AoBR Captain [see the end of this post for where that's at]. Some Badab Black wash still to be applied. 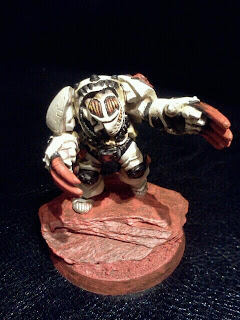 Next up was the hard part, painting over the green reinforcements. I thought they were cartoony but they did look well executed if a bit glossy and OTT. Everything that was 'green enamelled' will now be weathered bronze like the current Deathwing. Not sure if I should change his eye lenses to green though...? 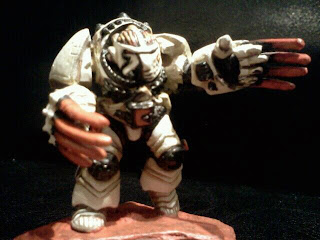 Last up his Crux has been covered in Mechrite Red and then overbrushed in Vermillion as standard. Not entirely sure how to treat the vents on the top of the armour and I need to decide if I'll drill into the middle jewel on top and pin one of the Ravenwing upgrade sprue items. It should make him look even more impressive. He's currently taller than the other marines but only just taller than the sergeant with his Iron Halo. Of course I'm loate to do anything that'll easily snap off, especially as this is such a 'compact' model, even if it does weigh a tonne! 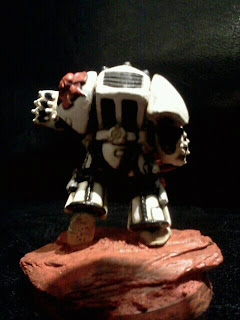 Referring back to what I said above, here's my first stab at power weapons [pun intended]. Just playing around with the Vermillion Art acrylic. Will add some more washes and highlights. It's not awesome but I'm confident it'll be sufficient in the end. 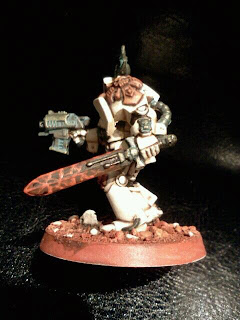