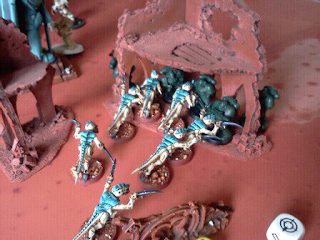 I originally planned to go back to the Lost Boys Gaming Club next week. I had a Kendo Kata class last night and thought it unfair to be out two consecutive night but my good lady wife pointed out next Tuesday was Valnetine's and would I be spending it with some guys playing games or with her, the one I love ♥ So I've rejigged things and I'll be going tonight.
Meanwhile, looking at my blog schedule there doesn't seem to be a lot of posts prepped so expect things to be quieter than usual perhaps. I mean I can always write stuff but that tends to just go on and on and on [see my forthcoming Android App review, less of a review and more a history of my phone ownership?!] and takes even more time than if I have pics. But never fear last weeks gaming jaunt has reinvigorated my passion. I have been painting and I've nearly finished my trees [pictured in their early stage below]. I was up last night after kata, catching up with the second quarter of the Super-bowl and Red Planet Basing with only the Bonewhite stones left to do, then all but the super large trees are complete. I'll take pictures and hopefully gee up the boy to have a game with them in so you can see them in action. I also have a nice idea for Flufftastic to go with them. 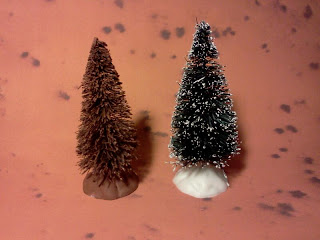 ﻿On top of that I'm working on another Ripper base, my Deathwing, Dreadnought and bits of scenery, so although I may not have a great deal to discuss at the moment there should be plenty to share soon. Although I could surprise myself with a whole slew of content, who knows?