I may have to do this over a couple of posts, a lot happened, but my recollection may be off so that might shorten the commentary [huzzah]. As the title suggests - 1500pts Tyranids [usual suspects for me, just with Ymgarl Genestealers and Sky Slasher Swam with Spinfists for giggles] Vs White Scars, 3 units of bikes [obviously], Vindicator, Predator, 2 Whirlwinds [he took them for a giggle] and 2 Land Speeders., Dawn of War [my first time] and capture and control.
So ignore the bikes in the first pic, they're not actually there it just saved time to not take them off to put them back on. I started with the Hormies in the centre terrain piece with the Warriors and Prime for Synapse everything else would outflank/deepstrike except. 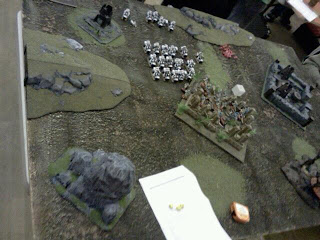 First turn the Tervigon stepped into the area terrain nearest me with the Biovore, but I forgot to spawn so objective in the centre of the terrain was not captured. Rob, the club chairman who I was facing had his objective [a fallen White Scar rider] just to the right of that lone bike [thats not there] in the top left. With nothing to shoot that was pretty much my turn 1. 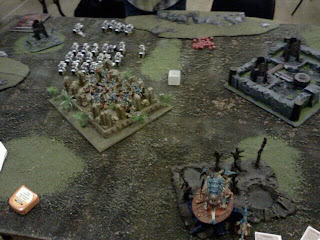 Here come the White Scars, everything burns forward but due to the Dawn of War rules stating he can't end his turn within 18" of my force that brood in the middle force him to halt his advance. Over on the right a bike squad head for my backfield objective. 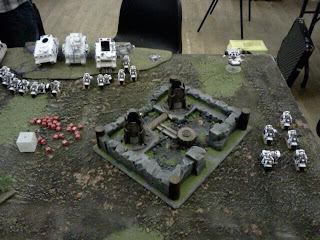 While over on the left not much goes on, I think for fear of that area terrain near his objective, what deep and dark secret might lurk within that strangely forbidding structure...? Rob's first turn of shooting wasn't as bad as it could be, night fighting hampered some of his units but the bikers got in range to see the Hormies and the Whirlwinds could fire whether it was day or night and they hit with abandon, wounded with no discrepancy and to cap it all ignored cover saves which meant the Hormagaunts were smashed to smithereens by the barrage of armour piercing missiles. 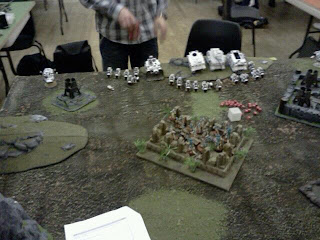 My turn and here come the deep strikers. First up the spore pod slams down disgorging a Zoanthope, 4 bases of Sky Slashers deviate back from their intended landing site near the bikers. The Hormagaunts raced forwards past the pod eager to tackle the bike squad. 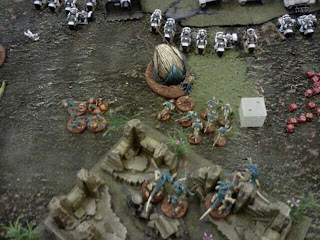 Meanwhile the Trygon Prime bursts from the ground confused by all the biker vibrations [hence the shakey cam, apologies] not in it's intended spot but instead coming up through the power relay station and in so doing tore a hole in it's armour and suffering a wound. The Tervigon spawned 8 Termagants so we were now holding our objective. 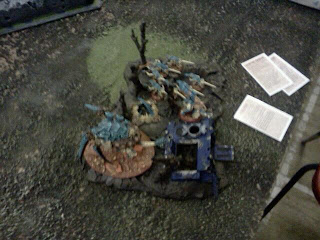 The Trygon Prime's containment Spines sparked forth taking down two bikers, the Spinefist of the Sky Slashers proved ineffective against marine armour even with 16 shots! The Tyranid Warriors whiffed all over the place as did the biovore, shots going astray and those that did hit were either not strong enough to wound the tough bikers or their Power Armour was strong enough to resist the bio-weapons. 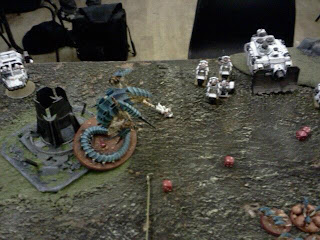 The Zoanthrope targetted it's great brain at the Predator but promptly became confused in a spychic mishap
The Hormagaunts charged into the middle bikers taking one down for their 21 attacks. In return they suffered extensively and thanks to the Synapse Control telling them to keep attacking they were slaughtered for their rage fueled tenacity. 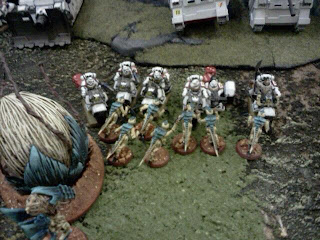 Leaving the bikes to consolidate forwards 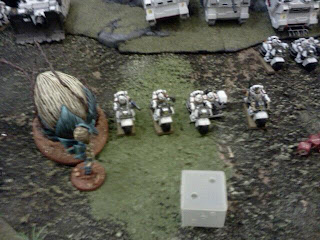 The warriors were charged and used the cover wisely but not without losses. The Prime sliced and diced with his bonesword killing instantly a squad member but one of the brood fell to the Biker Captain and his fellow marines. 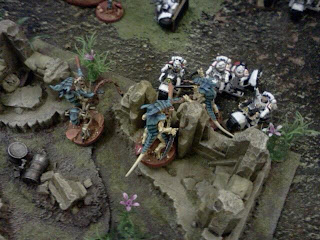 So we'll leave it there until tomorrow. This was a mammoth game that didn't go all the way to the wire but we played pretty late so a lot did happen.
Posted by 40kaddict at 11:38