Deathwing Progress - a little damage here and there

Here's my test terminator with a bit of damage, first peaking through the gloom... 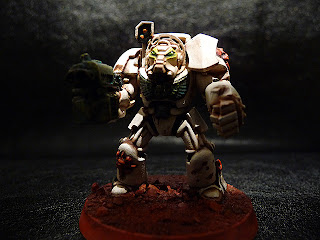 ...and here we can see where it went wrong! Like I said previously I've read enough tutorials to know where I should put the damage but for some reason I went with painting it [instead of sponging] on plac﻿es I could easily get to instead of  where you would realisticaly find it and as such I'm less than convinced. 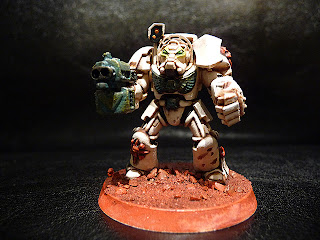 Really, this just makes him looklike a giraffe 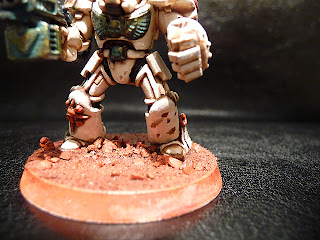 I'm slightly happier with the scratches I did, I'd seen some on another terminator and wanted to see if it worked, it sort of does, although it would have scratched through the Deathwing symbol too, if I'd painted it on that is! I still need to practice this, or forget freehand altogether and go with decals. 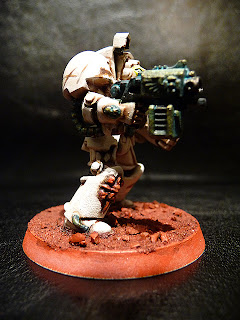 There's the other 'chip' on the front that is also OK as battle damage goes but I'm getting the impression this is looking like rust now and that annoys me because of my belief that Ceramite isn't metallic but a ceramic composite. 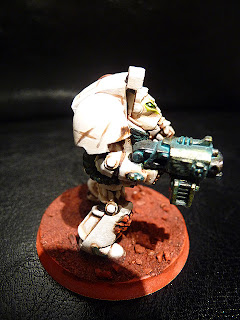 The power fist also had some scratches. I don't think this is a failure per se but maybe I can rescue this with a bit more in places, but that means running the gauntlet of doing all five with damage and making sure I get all five right whereas to return this to pristine fashion may be an easier job... Saying all that the Crux Terminatus is looking cool. 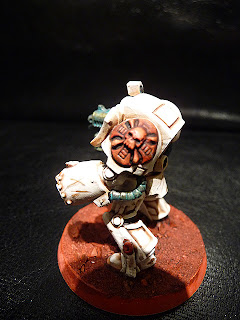 And some more battle scars which work OK. What say you folks? Carry on regardless and take it back a step? 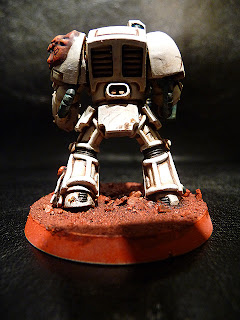