Catching up where we left off or perhaps some point after that because there is something missing in the pic below and that's the Vindicator. The Trygon Prime had managed to detach itself from the power relay station and charged the tank, ripping it to pieces in it's first strike, those adrenal glands making mince meat of it's armour. In return the bikers moved into a better firing position and the other squad put some wounds on the sky-slashers and then closed in for the kill. By the time combat was over and they had rolled [and failed] saves thanks to being fearless each base has 3 wounds down with only one remaining. 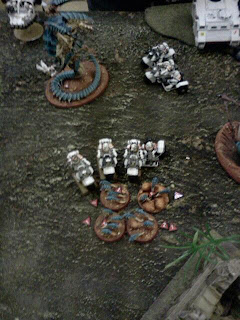 Another few turns must have taken place with the sky-slashers reduced to pulp and the bike squad consolidating back to fire at the Trygon who must have wiped out the other squad at some point through his containment spines. Additionally the Whirlwind fire targeted the Termagants holding my objective and once again the cover destroying incendiaries wiped them out except for one solitary Termagant. Thankfully the Tervigon kindly pooped another 9 fresh bodies to replace the 7 dead ones. The Zoanthrope was still alive at this point but he had suffered one wound already and couldn't survive the odds. He'd tried to fire a second time, passed his psychic test but his hit roll of 1 just proved how sad and pathetic the creature really is. 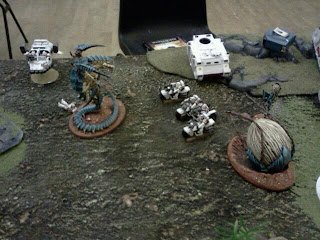 Over on the right flank the Dev-gaunts finally made it to the party, but still no sign of the Ymgarls or the adrenal stealers. 30 Devourer shots spat forth causing a wound, which would reduce their leadership by one [not that it'd make any difference]. The Tervigon's stinger salvo was completely ineffective and I think the bike squad burned up, slaughtered the Dev-gaunts then hot-footed back out of range toward the right board edge. 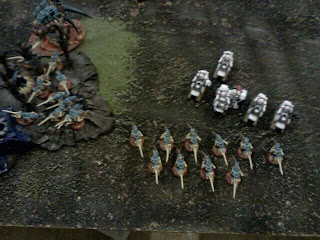 Little did they know that the Broodlord and his posse had been waiting patiently for such a move. They raged onto the battlefield and tore through their bikes like papier-mâché with their rending claws. This was the scene once their grizzly work was done! 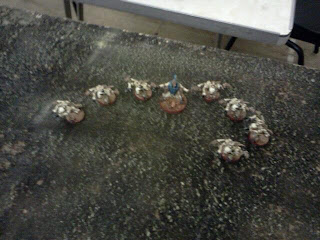 Over in the middle another 12 newly pooped Termagants opened fire with their Fleshborers. I think they did some damage but their assault was pretty dire, losing half the brood in the process. The biker captain was the sole survivor from his squad by this stage but his power fist had taken teh Prime down, the Warriors effectiveness had been further reduced and so far they'd been pretty ineffective in combat. 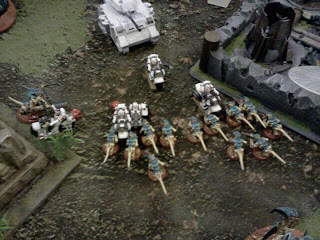 The Trygon assaulted the two remaining bikes [I think the two alongside the spore pod aren't supposed to be on the board] and promptly ate them consolidating towards the Whirlwind. 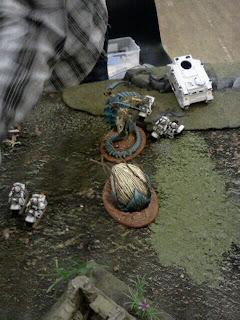 When the Broodlord turned up some psychic connection must have stirred the dormant Ymgarl stealers from their resting place in the power relay station. They boiled forth from hiding and swamped the land-speeder. 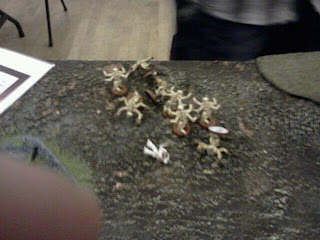 The Trygon looking for it's next meal. It was during Rob's last turn that suddenly the rain of death from the Whirlwinds ceased. The scattered massively in many directions and a lot of his shots couldn't get a break. After the success so far as his bikes began to disappear en masse the remaining marines accuracy faltered. 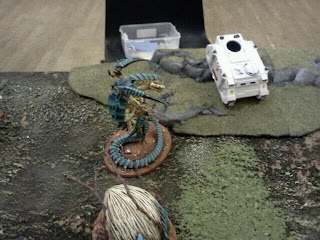 However, the biker captain destroyed the remaining Warrior and burned forwards to take on the Tervigon which by now had suffered some 3 wounds. 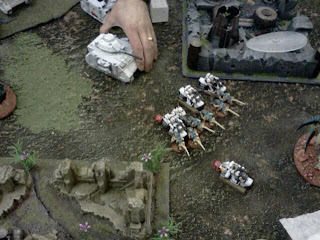 It was at this point we had to call it a day. With that one remaining bike squad as troops he could not capture the other objective and contest mine. He still had tanks but they were exposed to the rampaging Trygon prime and the angry Ymgarls about to sweep across that back field. The Tervigon was eyeing the final bike squad with hunger and so I won.
In conclusion: this was one of the best games I've played, proper ebb and flow, the battle hung in the balance. Rob is really patient with my still fledgling 5th edition gaming knowledge and every new creature that brought it's weapons, attacks or many wounds to bear was a new surprise to him as 'nids aren't played by anyone else. Bikes are really durable, that extra toughness is really hard to get past and even then the power is an awesome life saver. The twin linked bolters did a lot of damage but the Whirlwinds were supreme in thinning out the gribblies, not bad for a last minute decision. It doesn't matter if you have plenty of cover if what's aimed at you ignores it!
Dawn of War is a really tactical deployment. It being my first time it took quite a while to make a decision but it make a change to start the game halfway on the board even if the usually out of range Warriors screwed up their chance to shine.
Genestealers were awesome, outflanking is the way to go. Didn't see enough of the Ymgarls to judge and I made them some special mutation markers too! [coming soon] Sky-slashers only served to tar-pit the bikes but I think they could be fun against Eldar or guard, maybe three bases next time. Lastly, the only good thing for a Zoanthrope is bait. Put him in the middle and have everyone shoot him for fear he'll blow them up with his 3+ save keeping him alive long enough to draw fire. I want to try the Doom for the same reason, but the stealing extra wounds would make him even more of a target. However I don't know whether I can be bothered to spend the points on him but knowing that's I would use him perhaps little less expectation then it might surprise me when it finally does lance something!
Still lots to think about for the game on 3rd March!
Posted by 40kaddict at 12:38