The objects of my obsession 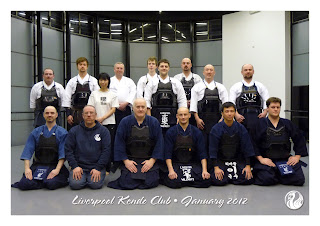 If you may recall when I 'celebrated' the blogs Birthday and treated it to more sporadic posting and less content [what a gift] I revealed a little about my passions, nay obsessions, nay addictions! Which came in three flavours:
And these addictions have come about and chopped and changed for priority over the last 20 or so. Each one having it's time to shine. My favorite band Pitchshifter is still very much under the radar, a new album is in the works but the guys are taking their time as there's no pressure in their lives for it at the moment. Which left me with the other two. GW which I think about an awful lot, even though I'm in that floundering period between completing projects and being inspired to get stuff done. And lastly kendo, the martial art I gave up for nine years only to regret every lost second.

If you reread my post on Hoshi Komi you will get a bit more insight into where I was at with it. For the past five years I've been an active member of Liverpool Kendo Club and due to the usual loss of members etc. I was elevated to the position of Sempai, that's the guy below the Sensei who runs the class, not teaches the class. I was all set to attempt my 3rd Dan this March but due to some changes in the symptoms of one of my persistent injuries I went back to see the consultant.

Long story short [too late] as of last week I had to retire from kendo. Well, retire from being hit at least. It was possibly the hardest thing I've ever had to do but we shall have to move on and with all things the waning of one thing brings about the waxing of another and it appears I now have a free evening a week that I've secured with the good lady wife to indulge my hobby. So, next week I will be sloping off to my local gaming club in Ainsdale, a small village not far from where I live where both my Grandparents and my Great Aunt used to live. Coincidentally the club is held in the same church hall my Grandparents used to attend and my Grandad did the quantity surveying for. Destiny? or the ruinous power exerting their will over my life?

How this will impact the blog I don't know. I'll certainly be more hobby orientated, maybe have tales to tell of the new 'gaming crew' I've joined. Can't say I'm not just a little nervous, it's been a long time since I was 'the new boy at the club' especially when I was essentially 'top dog' at kendo, although my sparring never reflected that, ha, ha! Anyway I'll keep you all updated on my jaunt.