Having been inspired to name my Knights after the surgeons who saved my son's life I finally put paint to the chest plates. Ser Ellenbogen and Lady Pettorini, much better than I thought I could freehand. 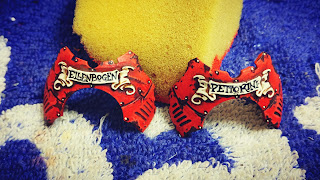 And the pipework that will be covered up by the chest plates. I really wish these could be more visible but it says a lot I'll hide it all to recognise, however trivially, the efforts of those surgeons. 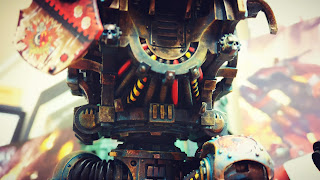 And more pipework to be obscured. 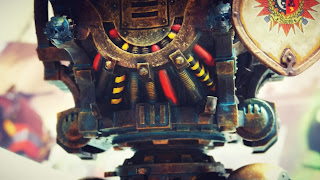 And verdigris. Once again it's just Army Painter Hydra Turquoise thinned with water, blotchy in some places but that's what happens when you 'batch' two knights at once.

The line between red and cream/white on the ion shield didn't work for me so I did a quick cog pattern freehand, still not perfect but better. With the knights mostly done it was time to bring the weapons up to scratch - so many of them, my patience was flagging.

And then I threw this spanner in the works - yellow/black chevrons on some of the options [I've done 3 battle cannon barrels now]. Starting with orange... 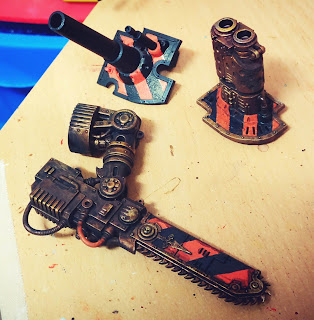 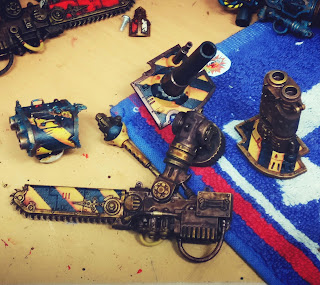 While everything else was Vemilion highlights. 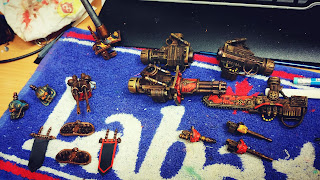 Until eventually it was a mass of bits awaiting varnish or glow FX. 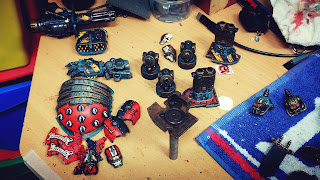 Something about the Gallant base was still 'empty' so I figured a wrecked banner might balance it out and I had an old one doing nothing. 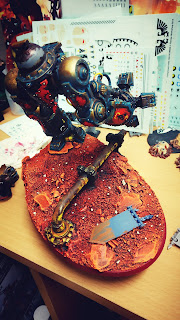 I then distressed it further. This will be some kind of Nurgle affiliate. I've asked Liam if he'd paint it as he has a Nurgle army and it keeps it connected to our group, but it has to be Nurgle as testament to these Knights conquring the disease. I'll get it to him at some point to paint up. 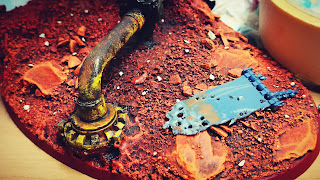 Meanwhile I added some paint on the generators. This will be coated with Tamiya Clear Red X-27 so it's just underpainting to suggest some internals. 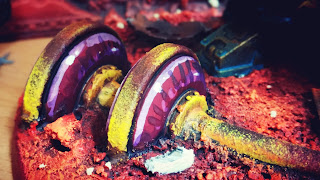 I also blobbed on some highlights in the eyes. 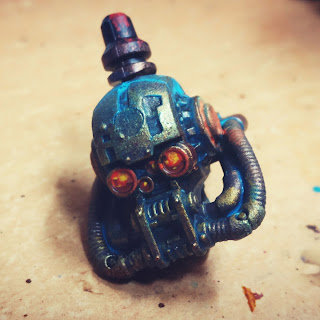 These will be covered up, not just by the faceplates but the Tamiya Clear Orange X-26. Sad really, there are some nicely painterly splodges I really like that have since been lost :( 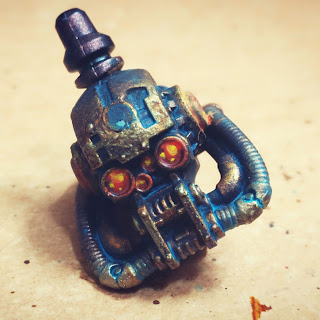 And next the joys of glow FX and varnish...