With my base 'iced' with tile adhesive it was time to put on some sand and slate. I freely admit I hadn;t really thought about the placement of the slate and so the sand needed to go some way to blending it all in. However when the Knight was put in place it just looked so dull. There was just too much empty space and I thouhg it needed something in the foreground to break ot up... 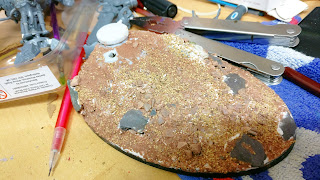 I may have gone a little overboard though. It definitely solves the problem but it's a little overwhelming in some respects. Overall it's better though so I can live with it. 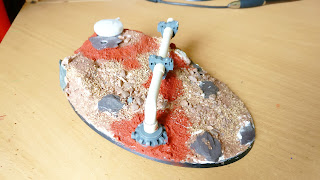 I found th eplastic tube in the garage, no idea what it was from but new it would work. I had some Drop Pod harnesses to use as supports, the round thing was another bit that PeteB gave me years ago that looked like a cool pipe manifold. I then used masking tape to make pipe collars, wrapping them round the pipe. 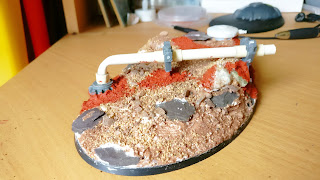 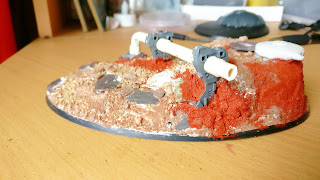 I also added the extra bit of slate to where the Knight will be fixed, it adds another few degrees of backwards lean so it balances the pose better. 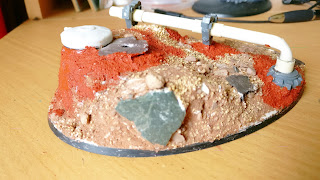 This is even leaning too far forwards, once it's glued it'll be better. The left foot does make a nice interaction with the silhouette of the pipe though.

I mean I've no idea where that foot is going to land, if the pipe is likely to be stomped on but the context of the huge Knight makes the oversized pipework less silly.

So it all got primed with Red Oxide car primer and I cannot convey the sense of satisfaction this gave me. I'm on to painting, familiar territory it feels like progress. Going back and putting the pipes on was a setback now I could taste the advancement. 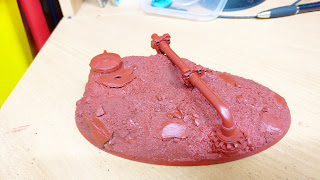 And yet I've still got the other Knights legs and base to do. Both need their weapons options built and magnetised as well as their Carapaces finished off and heads magnetised. 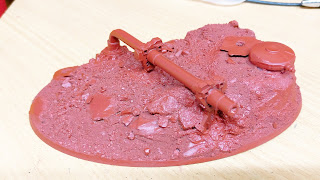 There is so much to do and although there is a big milestone sense of achievement to move onto some painting a reality check has tempered some of that satisfaction, sadly. Nevermind, I can paint this separatelt to completion and use that momentum to help me get through all the other build elements. I might be more productive and efficient to be solely in 'build mode' but motivationally I need painting to feel like there's progress.