I cogitated an awful lot about the chevrons. I was trying to balance what I've already done with the Lancer and Warglaives but also take the opportunity to expand so there was a little more variety instead of sticking to some hard rules. Firstly my chevrons are not chevrons, that would be a V or A shape. These are just angled stripes but I'll be still calling them chevrons. Secondly, mine angle backwards, while Raven chevrons are more the V toward the head. And I also don't add the white line between the black and yellow. My house Corvus can be a little different as an offshoot branch of Raven. 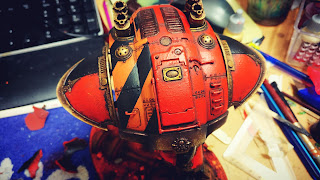 But the big thing on this guy is his chevrons are twice as thick on the carapace as I normally do. Raven has some fluff about the more experienced you are the thicker they get [although it also says they eschew heraldic indentifiers that normally indicate higher ranks...? Go figure?]. I also covered one third of the carapace. I see this guy as a little more experienced Knight Crusader who stands back and shoots. 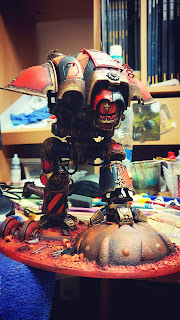 Whereas the running Knight is a young Gallant and so he has narrower chevrons that only cover the angled edge. This is the mirror of my Lancer and the Warglaives have similar reflected schemes.

On top of the stripes I also painted some panels black, again with mirrored panelling. 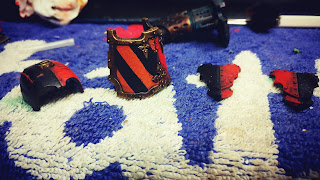 The orange got an Iyanden Dark Sun highlight but I was keen to keep some of the orange base showing. 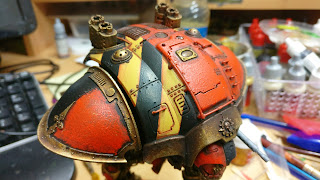 The Gallants stripes were a bit inconsistent with thickness unfortunately but it's not too noticeable.

Chevron stripes on the shin plate too. Not a particularly common choice on Raven, invariably the inner panels are both black but this was a choice on the Lancer that I'm continuing on my other Knights, again to add a subtle amendment to the scheme but also because I haven't done too much with the chevrons on the carapace. 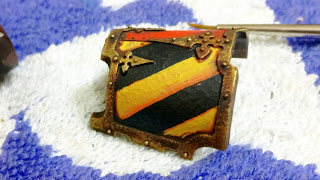 Should I ever get a Dominus class knight I will definitely do the entire carapace as a chevron but for now these colours are done. Further highlights will be added after decals and damage. I've also got to prime the small-arms weaponry, can't have bare plastic stubbers. 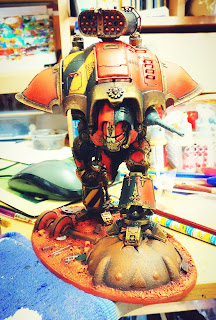 You can see I also did a white stripe down the front of his faceplate and the bottom of its mouthguard. White/cream is a further addition to my scheme. Raven does feature white sparingly, my use is on the ion shields and the head. I'd liked to have used it more but I just can't reconcile it next to the chevrons, another reason why it doesn't edge the black and yellow stripes. Anyway, decals next so gloss varnish on all the armour plates.

We begin week 4 [out of six] of Radiotherapy at the Clatterbridge Cancer Centre for my hero. \The weekend was reasonably quiet, he's beginning to get tired a little quicker but his radiologist pointed out just how much of his body is being treated so that's understandable. On Friday his hair really started to come out and he found it so uncomfortable that night he decided he wanted to go to the barbers the next morning

We've been taking the boys to Your Barbers in Ormskirk for years and although we're not on first name terms with them they were incredibly understanding and supportive. By the end there was just a small bit of hair left, surprisingly round his surgery scar. The owner wouldn't take any payment and asked us to put it in a charity, which we did at Clatterbridge yesterday.

Also we received some financial support from the Family Fund this included some money for clothes [he's had a lot of new pyjamas] bedding and support for transport, which with a daily 50 mile roundtrip and twice through the Mersey Tunnel is really helpful. Interestingly I understand the tunnel was featured in Harry Potter and the Deathly Hallows Pt1. I think it's meant to be the Dartford Tunnel, and is for the entrance/exit but the inside sequence with Hagrid's bike is the Queensway Tunnel, which we take on a Tuesday. I think it was easier to film there than Dartford and they look similar too.

Anyway, it all helps and we're still being positive.
Posted by 40kaddict at 12:00