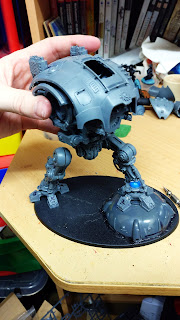 I'd been avoiding dealing with it but had to press on. I split the toes so it could stand 'clamped' on the old Ben 10 toy. I drilled and pinned all the toes. Then I split a 12mm [or 10mm?] wooden bead and glued it in place for the ankle joint. 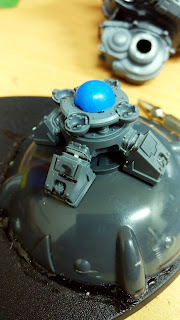 I removed the molded ankle joint - *Top Tip* score all the way round the ball joint then twist the piece off with needle nose pliers. So long as you go perpendicular to the cut it snaps off with minimal effort. Much safer than trying to cut through it entirely. 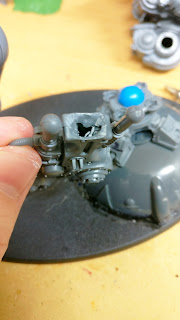 Now, I wanted some squashed deformation of the 'gas chamber' [that's what we'll call it] and got out my heat gun. I tried heating a flat-head screw driver for five minutes to use as stamp for where the toes would go. It didn't work so I hit the chamber with the heat gun and tried impressing the spanner... as you can see it was far from a success. It blistered the plastic - no real hardship but the chamber did sag and has fundamentally warped the entire shape. 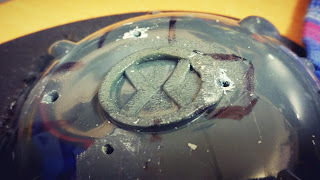 What I failed to notice was the foot was also in the path of the heat gun [or sgot too hot when I put it in place on the chamber] and you'll see it distorted some of the toes. You can just see a 'nipple' on the left toe, that's the metal pin poking through the plastic! It won't be too bad when it's painted but I was pretty P'ed off at this point. The white powder is baking powder from super-gluing the pinned toes ahead of green stuffing some flexi-pipe.Adding baking powder makes it set really quick and creates a rock hard material almost like concrete. 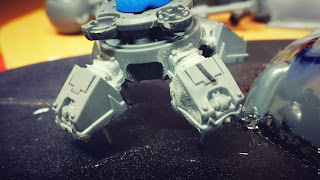 I had an entire day visualising the task still ahead and the mistakes I'd made. I finally came to the conclusion I needed to find a fixed point. Fix one leg in place and find a way to make the second leg work [similar in principle to this Tip of the Day from Warhammer TV]. So I put the left foot in situ and drilled a hole for the rod that'll go through the leg. 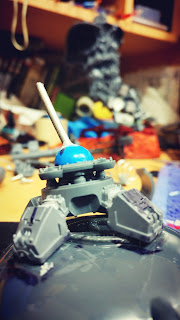 As you can see the heat distortion [and probably the pins] means the front and back toes no longer sit flush on the chamber :( 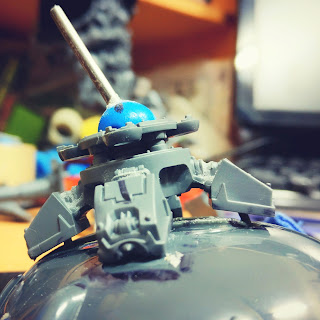 Whereas the sides just about make physical sense. 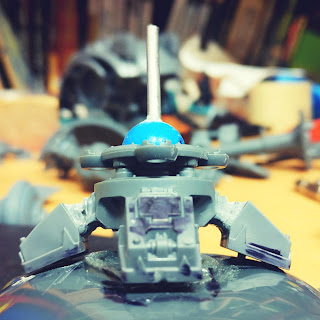 So I was forced to add some Milliput in a very crude and possibly unrealistic attempt at crushing the chamber. I'm hoping the distressed paintwork will disguise then hamfisted sculpting but we'll see. 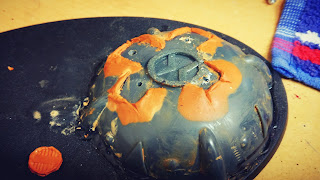 The toes were also filled out with Milliput - to ensure the panel pins remain solidly in place. I also sculpted some tread on the front and back toes. Although the sculpture on the chamber will go some way to hid the gap I thought some 'stacked heels' would create a more solid fit and allow a greater contact zone when I come to glue them in place. 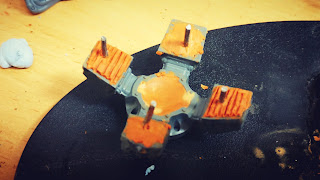 I stuffed a load of Milliput inside the shin - so much it was busting through the seams. This was to support the coat hanger rod into the ankle. I put some super-glue on the rod and poly-glue on the front and back piston ball joints and joined it all together adding a final blend of Milliput between the ankle and wooden bead. Hopefully there are enough adhesives in place to hold this steady. Next up will be the two side pistons and then to glue the ankle to the foot. 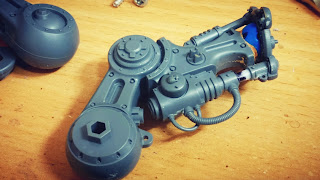 I'll then work on the hip pipes and with one leg as a solid foundation it might help in positioning the second. The over-riding problem with these is eventually you have to make that leap of faith - as above I then cocked it up but I've dealt with the mistake and I'm now closer to finishing even if it's less than perfect. My dryfit image from the top looks like a pose I would be more than happy with but even only small discrepancies in the posing so far the pose might look very different.