I'd had opportunity to see my match up from the Best Cost Pairings App and the Honest Wargamer review a couple of days before:

Keith Martin-White [www.hexwar.com] had around 9 Leman Russes with 90 conscripts in three rows in front of them. Having played Ben the other day with his Aeldari and he'd 'screened' his vehicles with three blobs of Dire Avengers alongside each other I realised that the conscripts would be in rows and the guys were right - how was I going to get through them? Keith had deployed right at the back so my only option was to try and smash through his army. Perhaps with hindsight I should have flanked from the right, forcing him to move his tanks to get a firing angle but instead I went head on, luckily I somehow won the first turn, even with Keith finishing deployment first. 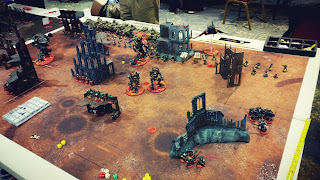 The Lancer made an 11" Flank Speed Advance and was in the faces of the Conscripts from the off. The Dark Talon got into the back-field, dropping a Stasis Bomb but only killing 5 Conscripts. I then made the dubious decision to split fire between the first two ranks of conscripts. I'm not sure what my reasoning was, that I would ultimately have to pile through both of them anyway. Frustratingly Keith had Petrov's pistol [Relic] that meant any failed Morale check could be reduced to just 1 casualty. 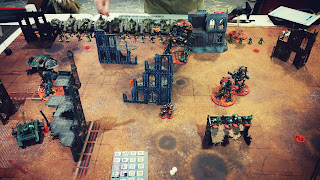 The bikes managed to do a fair bit of shooting on the 'scripts but left me without any models to charge. 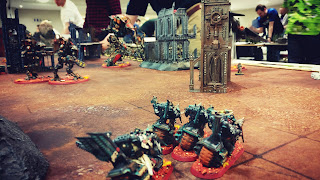 The Lancer managed to finish off quite a few of the first rank of 'scripts but they just fell back in their turn. 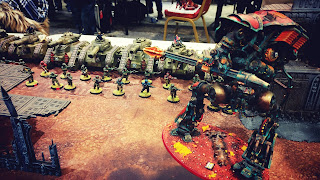 Leaving it exposed and easy prey for the Russes, I think he was destroyed by the 2nd or 3rd tank even with rotated Ion Shields leaving the rest to target my remaining forces. He might have blown up I'm not sure. Primary objectives it was Keith with 3 VPs to my 1 [we worked out secondaries at the end] 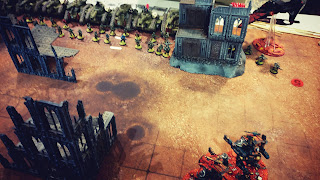 Turn 2 and Euronymous gets into the back line but again the bubble wrap prevented him from getting at anything worthy. The Dark Talon continued to strafe the 'scripts. 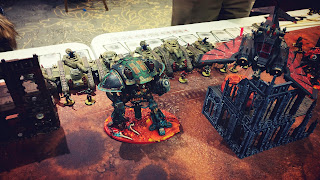 The Warglaives got into the mix, while one went around the ruins so he was obscured with the bikes seeking to capture the objective and be within striking distance of support. 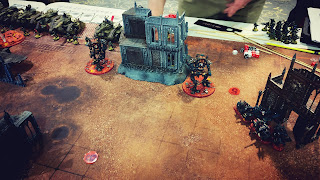 'Scripts fell back leaving Euronymous exposed like the Lancer and similarly he was blasted apart but he exploded taking quite a few with him and doing more damage to the Russes than he had with his weapons. I think he actually took one of them out! I managed to kill 1, hold 1, kill more and hold more for 4 VPs to Keith's 2. It was 5:5 on primaries but most of my army was smoking wrecks and there were more tanks than I could deal with. 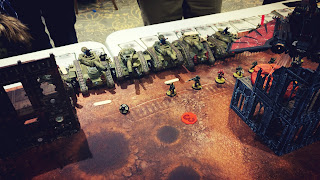 The Warglaives managed to break through the lines and get at the tanks, but not without one losing 8 wounds. Unfortunately the one in the right couldn't kill his target, 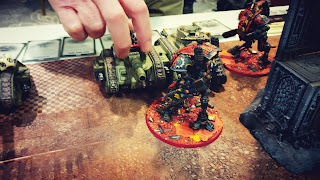 but the damaged Armiger somehow took out his! 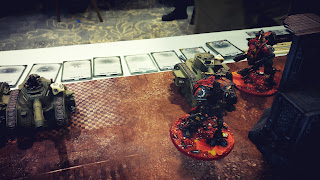 With few targets to choose from my pretty useless Predator was picked off with ease. We each scored 3 VPs turn 3, with me holding more and Keith killing more.

Turn 4 and I was pretty much just trying hold objectives but it was futile. The Armiger's were destroyed, again I think at least 1 blew up doing more damage than they'd actually achieved in anger! 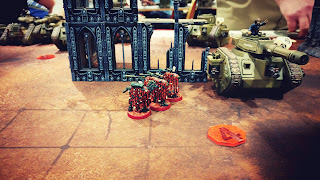 The tanks steam rolled my scouts 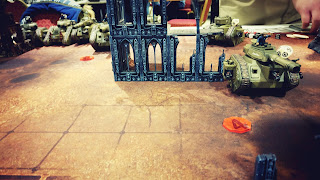 and wiped out the Dark Talon, their massed Battle Cannons too much even for this supersonic flyer.

Turn 4 and Keith was able to wipe me out, ultimately scoring 16 primary VPs and 9 secondaries. I managed 8 primary and 6 secondary. Final score was 25:14 to Keith. 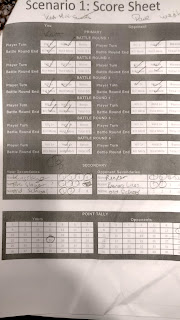 A tough game but nothing I hadn't expected. Keith knew his army, knew his plan and stuck to it. I'm not entirely sure what I could have done apart from focused on a single unit of 'scripts at a time or tried to flank him, although alternating deployment might have prevented that option. 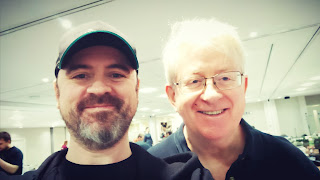 Still, a good challenge and having set the bar low my next match-up might be more my speed...