Before the decals I had a little highlight to do on the black panels, a mix of stippling and drybrushing Incubi Darkness with the stippled on craft acrylic texture helping to make the lo-fi highlighting seem natural. 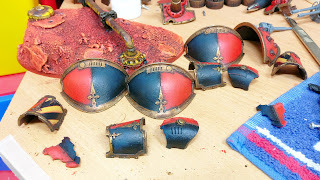 We all know drybrushing can look scruffy when compared with wet blending or even edge highlights but on rough texture it's ideal because the texture itself blends the roughness of the highlight. I think it says a lot that I was almost reluctant to add the decals after doing it! 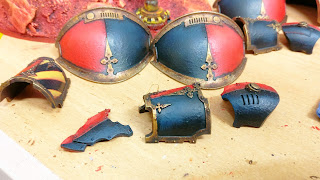 But I forged on regardless because I really wanted to add a lot! Too much?

I liked how the Warglaives looked with their cogs on the black, back part of the shoulder pad. 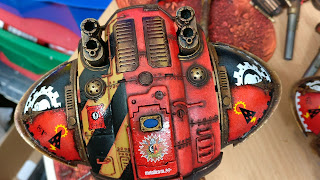 But they were an absolute nightmare to position, you can see it's creased but I'll fix that with battle damage. I followed Duncan's guide again, but even with the dags around the rivets and some decal softener it was far from straightforward. This has been coated in Lahmian Medium too, which was a challenge as it initially looked like the gloss varnish was not making it stick but aside from the creases at least there are no glossy 'haloes' around the decal, so that worked. 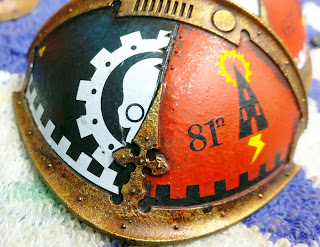 The Gallant went with the white cog trim on the red panel. I was convinced the black on the Castellan would look better but again wanted to play around. Also having added the white pattern on the black above I went without on the Gallant because I still wasn't convinced about the lack of breathing space between the two decals. Although looking at it, if I just make that leading cog a little narrower so they don't overlap it might look like they are meant to mesh together like normal cogs... 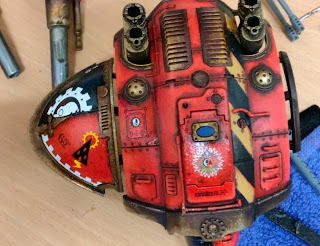 While paints were drying I finally decided to look at the base again. 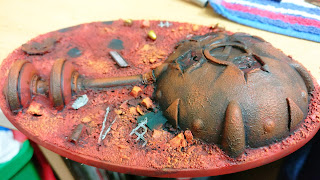 As much as I love it with the rust I need to match it up with pipes on the Gallant base. OK I don't need to, I want to. 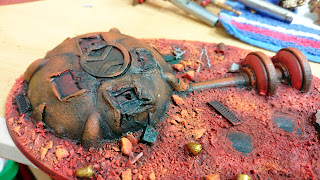 Once again a quick sponge of Iyanden Dark Sun/Valejo Yellow get me this. 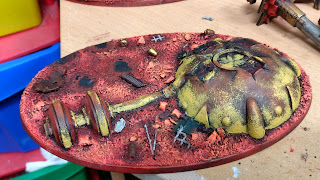 A bit more yellow perhaps than I originally envisaged but I'll be doing some additional rust/weathering on top so it should perhaps tone it back so there is more rust on show. That's the plan for the base and I've got weathering/damage on the Knights themselves next. 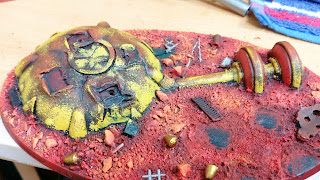 Meanwhile I've also created a checklist of elements to get most of the Knight done and by ticking off one or two a night it feels like steady progress, far more than I would expect or actually need at this point but it's all good.