Day 2, game 4, scenario 4: What's Your's is Mine. 5 objectives, 1 in the middle, 1 each in your deployment zone and 1 each in your opponents DZ. Bonus points to control both the objectives you placed. I'd be facing Rick Martin and his Deathwatch and thanks to the wonders of the Best Coast Pairings app I knew that the night before. My main concerns were his Corvus Blackstar, Mortis Dreadnought and Razorback. There was a smattering of Imperial Guard too, for bubble wrap and CPs but with the table setup below I deployed aggressively to close that gap as soon as possible. I won the first turn yet again and Rick was unable to steal the initiative. 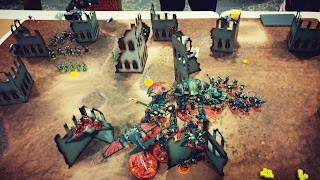 The Lancer went straight down the line and thanks to the small 'no man's land' in the table quarters setup getting to that front lien was easy. A Warglaive joined it, while the other flanked the ruin to get an angle on the Razorback, as did the Predator. Meanwhile Euronymous went between the ruins to be up front and target the tank. The Dark Talon overflew the guard in the ruins, Stasis Bomb doing some damage. 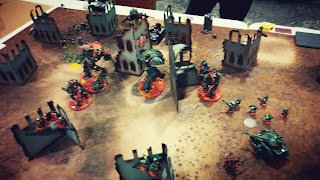 Supported by Heacy Stubber and Bolter fire from the bikes the squad was wiped out. It might have done some damage on the Blackstar too. The Razorback got destroyed and when the dust settled just one Frag Cannon guy was left. The remaining guardsmen were wiped out in assault and the Dreadnought also took a few wounds. 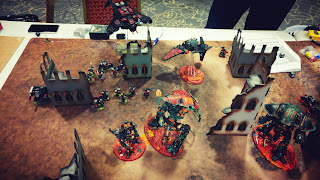 Rick had taken quite a pounding in that first turn but actually it was a lot of low value troops that had gone, his Deathwatch still had some tricks. The Blackstar overflew my Tactical squad holding his objective in my DZ but wasn't half as effective as my Dartk Talon had been. 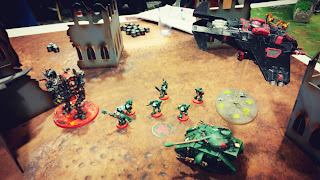 Rick's watch captain/Librarian [not sure] had some pretty lethal weaponry/powers. Not sure what damage it did but I knew I didn't want him around next turn. The Dreadnought came out from the ruins and I think I was particularly lucky with my invul saves.

He made the charge into my Warglaive but he was outmatched in combat. The Dreadnought was also Marked for Death as a secondary. 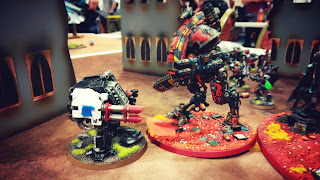 The Warglaive sliced it to pieces. By the end of turn 1 I'd scored all 5 primary VPs to Rick's 1. It was probably around this point that I recalled Mike Corr's issues with Deathwatch Vs Knights and suddenly realised this might be come a very one-sided battle. To his credit Rick was incredibly calm and philosophical about the situation. 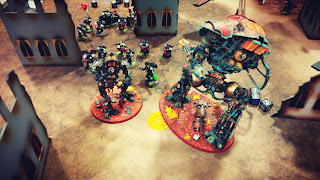 With Warglaive freed I flanked the ruins with the Dark Talon offering air support. The Lancer was going to tackle the squad of Veterans and the character. 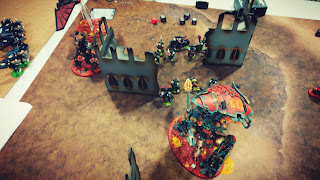 Euronymous struggled to negotiate the tight ruins, leaving the Warglaive boxed in and the Ravenwing pushing ahead. The Frag Cannon vet would not survive the shooting phase. 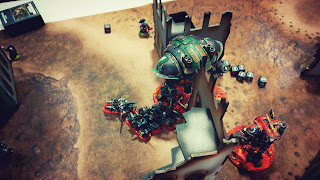 This still gave firing lines to the Blackstar which was gunned down by the Predator and a load of small arms fire. 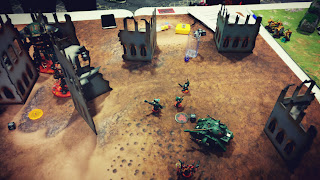 Lancer engaged the Vets, which allowed the Ravenwing a free charge for extra movement, which they made. The Warglaive appeared round the corner to assault the last of the Guard holding the objective in the ruins. 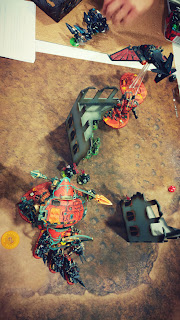 With most of the Vets dead the lone Terminator fell back leaving the Knight and bikers in the middle of his DZ. 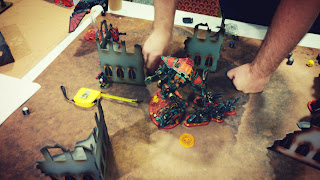 But reinforcements were on the way as two Veteran squads materialised via teleportarium. 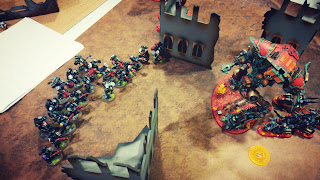 There was a lot of fire thrown at the Lancer, I think there were some meltas in there and special bullets which brought it from 27 down to 9 wounds. I scored another max 5 VPs and Rick scored 1 again. 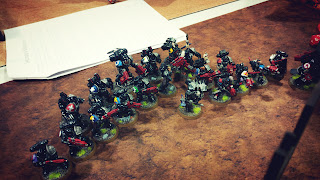 The Lancer charged the squads, while the Dark Talon strafed them. Euronymous closed up to offer support and hold the objective with the Ravenwing. 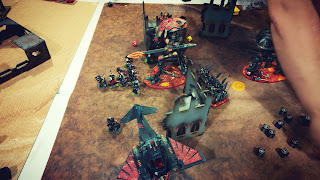 Despite inflicting heavy casualties the Vets managed enough wounds of their own to take the Lancer out and also two of my bikers in the process [yet another Knight explosion!]. 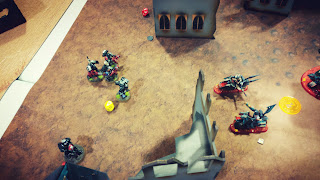 Rick had a jump pack HW with Thunder Hammer who was able to destroy the Warglaive too. Despite my lead and overwhelming odds the Deathwatch had taken out half of my Knights. Euronymous was still whole though. Another 5VPs to 2 and in my turn I was able to table Rick. 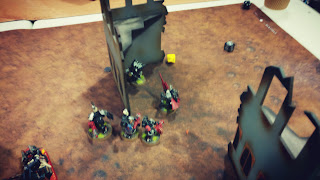 A rather sad end in some respects, the tabling seemed a nail in the coffin, although I was really pleased Rick managed to take out the Lancer and Warglaive. With Big Game, Titan Hunter and Slay the Warlord from Old School Rick added 5 secondaries to his score of 9 but I maxxed out on 37VPs. Also annoying was I forgot to get a selfie with him as I had to put my army up for the painting comp. 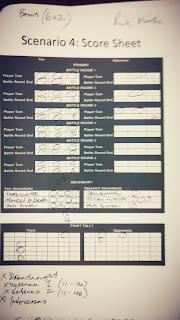 But an absolute pleasure to play against and with Chapter Approved and the Bolter Beta I really think they might be a better prospect. The Honest Wargamer guys believe they are top tier, it just takes a special way to play them. Anyway, three loses and a win, on to game 5.