Last game of the tournament and I've got Robin Neill from Geeks Wargaming you can see the preview of his army list here. I think Otty might have been up against Iron Hands this weekend too [if not Neill himself] as I'd overheard something about their durability - apparently a 6+ Feel No Pain equivalent throughout. 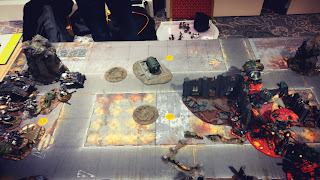 I think I finished deploying first and despite going as far up the board as possible I still had a long way to go to reach the Astartes... 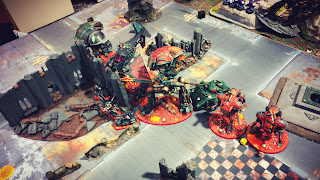 as Robin deployed well back in his zone, surrounding a big invul buffing Dreadnought with the rest of his Dread crew. 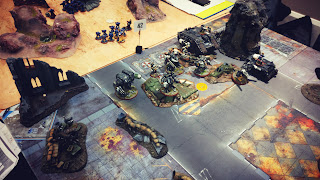 We rolled off and I won first turn for a 100% success for the weekend. With so far to go the Lancer had to Flank Speed [another obscene 10 or 11" advance] but had the bikes with him to score the objective. Actually I'm not sure what happened here as this is clearly Robin's end of movement phase. I'm guessing the Lancer did not make its charge as it's too far back but I did manage to kill something [I'm guessing a Dreadnought]. 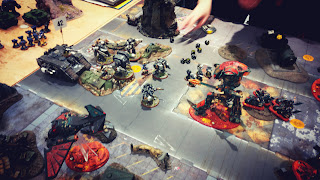 The Razorback couldn't get finished off and so it moved up the field to snatch the objective in the top left. I'd moved everything else up as much as possible but failed to take notice of the Bonus conditions for mission - have Characters on the objectives and so squandered a point with my Techmarine  beside the Predator when it could have been in those ruins. 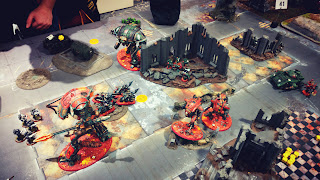 Robin retaliated by focussing on the Dark Talon, taking it out, unfortunately I didn't even get chance to  Stasis Bomb anything this game [and Mortal Wounds would have been handy].

The Lancer got charged but I interrupted and speared his Leviathan, I might have also damaged the other Dread. 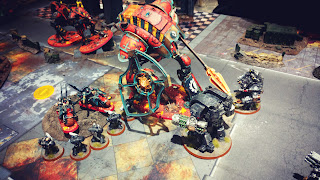 The bikes were whittled down to the Sergeant but killed and Iron hand in return. The Lancer took something like 17 wounds so by the end of Robin's turn he'd secured 6VPs [with Titan Killer, Big Guns and Old School] to my 3. 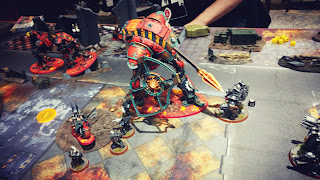 The Lancer fell back but towards Robin's back line, this allowed the Warglaives to move into his position facing the Dreadnoughts. Euronymous moved to intercept the Razorback and as a characters secured that objective. My Chaplain secured the centre objective and my Techmarine moved over to the ruins to guarantee the Bonus point. This meant the Predator had to move up to secure a better view, but I think whiffed on the Land Raider. 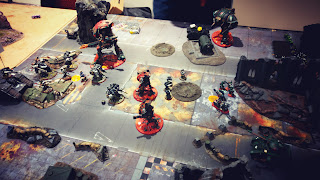 The Lancer multi-charged the Kheres pattern Contemptor, Techmarine, Librarian and Dreadnought. This allowed the Warglaives to get into combat, with one avoiding overwatch. Unfortunately I think Robin interrupted and his dread killed the Warglaive but it might have blown up [there seemed to be a lot of that this weekend]. My surviving Warglaive killed the other Dread. 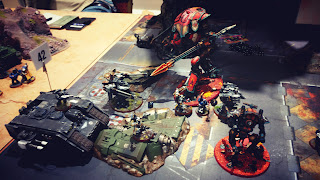 Euronymous totally wiped out the Razorback and all but one of the Tactical Squad it had sent after the bikes was left. 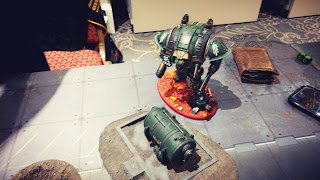 The Land Raider deployed its squad and moved away from the titanic melee. 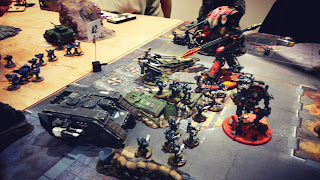 Concerted melta fire from the tac squad took down the Warglaive [he may have exploded too], leaving my 'spearhead' crumbling. Robin secured another 6 VPs but I was able to match him with 6 - I Killed 1, held an objective, held more objectives, the bonus and two Big Game Hunter kills. 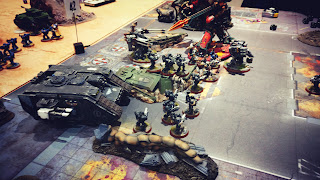 Turn 3, the Lancer Fell Back and the Bald Headed Quad Rapier was shot to pieces to get me a Marked for Death point. The Deredeo was killed somehow, he might have been part of the multi-charge with the infantry who were also Marked for Death. Euronymous would not suffer the last Tactical Marine to leave and achieved a 10" charge to stomp all over it's metal corpse. It was overkill for sure but it was more about movement and getting into the fight, it left me short of the bonus objective having moved off it. 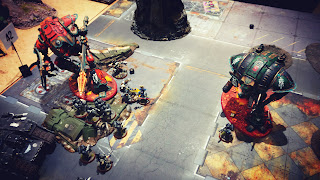 Most of the Tac squad got smooshed but the remainder either headed for Euronymous or hid in the Land Raider. 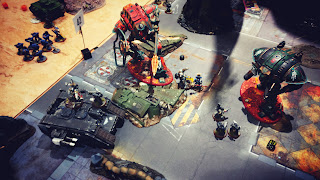 Everything shot at the Lancer who promptly exploded, wiping out the Techmarine, wounding the Librarian and putting some damage on the Land Raider. Euronymous was brought to 17 wounds but his Ion Shiled suddenly became unbeatable and I started making save after save against the solid shots from the quad Rapiers, the Melta-gun from the Tactical Squad and the Las Cannons from the Land Raider. I scored another 5 VPs but Robin scored 4. 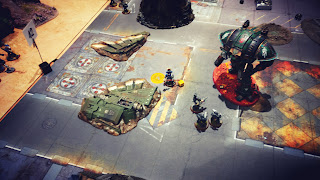 My turn 4 and I just couldn't kill anything. Everything either missed or was just damage so my turn was pretty quick, aside from Euronymous moving to intercept the Land Raider. I think my Biker Sergeant managed to get into combat with the Librarian. 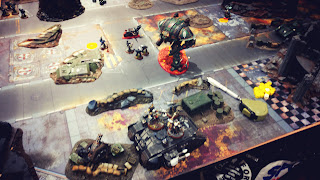 Unfortunately that just prompted it's passengers to disembark and shoot. He again made save after save but the Librarian had wounded it with Smite and eventually Euronymous was brought low through weight of fire but in typically belligerent mood blew up! 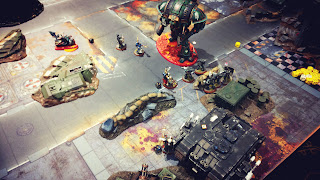 He took the Librarian, two Techmarines and a Tactical Marine with him. So despite not killing a single unit in my turn I'd somehow managed to kill more units in the Battle Round. I claimed another 5 VPs to Robin's 1 Kill VP. I'd finally overtaken him 19-17. 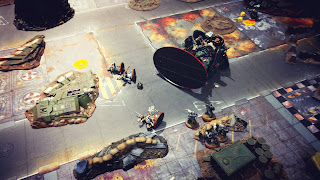 Turn 5 and things were going so quick because there was so little on the board. The Predator could do enough damage on the Land Raider and my Scouts got killed. I scored 2 VPs for hold 1 and hold more, Robin scored 1 VP for an objective. 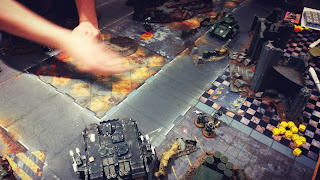 The last turn I still couldn't kill anything, but Robin could which netted him Kill 1 and Kill more, plus hold 1 taking our scores to 22 to me and 21 to Robin. Which prompted us to make absolutely certain on our scores, so the recount gave us 22-22 and then it became apparent I hadn't added the Big Game Hunter points for all the Dreadnoughts I'd killed. So when all the dust settled I'd got 24 to Robin's 22 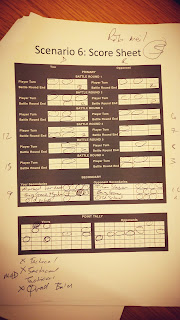 This was a really great game, the closest of the weekend, all 6 turns and despite getting first turn the Iron Hands famous resilience meant they easily overtook me at the beginning but I thankfully had enough strength in depth to claw it back. This felt like a tactical game though and granted I had an amazing run of Ion Shield saves on Euronymous he eventually fell but once again the Mortal Wounds from explosions was often my most potent weapon - they really need to FAQ the Noble Sacrifice Stratagem so it includes patterns of Knights beyond Armiger, Questoris and Dominus. 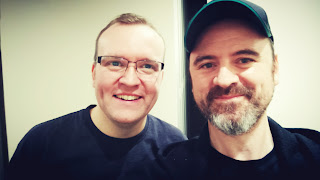 We were both really chuffed to end on such a good game hopefully I'll see Robin around again as Geeks Wargaming were supporting the LCO with their own terrain to help fill out the tables and I've seen them at Aceface's events before. The guys did a review of the tournament you can see my bit here: