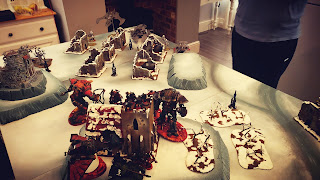 However Ben had borrowed an Aeldari army off Otty, it had a Scorpion Heavy Grav Tank, a Warp Hunter, Pheonix strike aircraft, Farseers on bikes, Shining Spears and 3 units of 10 Dire Avengers. You can see their disposition below. 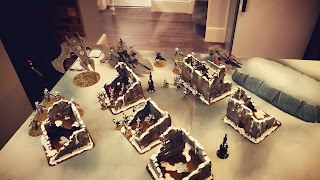 I faced off with the Lancer taking the lead, backed up by the Warglaives and Euronymous while my tac squads took cover behind the church and my Scouts held the objective in the ruined watchtower. 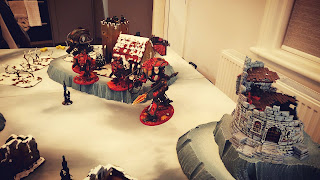 I won the first turn and my Lancer did Flank Speed right down the centre of the village [Hogsmeade? 😉 The Warglaives moved to the outskirts and their Thermal Spears, alongside the Thermal Cannon of Euronymous took out the Warp Hunter for a 'cheeky First Strtike'. My Plasma Cannon blew up first shot, but Dark Angels get to re-roll if their stationary, so survived afterall. 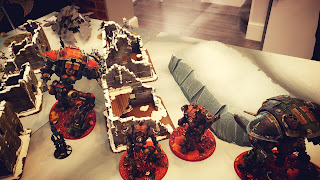 The Dark Talon couldn't quite make the distance to deploy the Stasis Bomb but shot at the Dire Avengers. They were from a Craftworld that made it -1 to hit so I didn't do too much damage. The Lancer went to charge and I think it whiffed on 3", I rerolled the 1 to get another 1 [typically]. 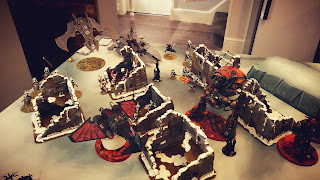 Ben's turn and the Pheonix and bikes flanked round to the watchtower [Shrieking Shack?] 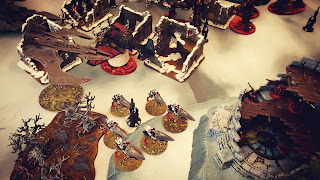 The Scorpion moved to the side to get a better angle on the Lancer and position the Dire Avengers between it and the Knight. 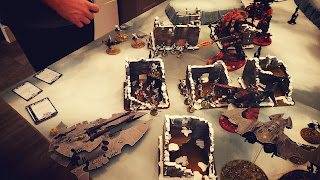 The Aspect warriors reformed to force the Knight to engage them before it could get to the Grav Tank. 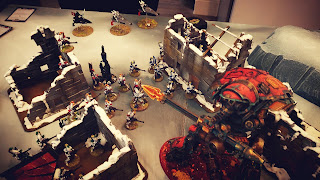 Unfortunately the Scorpion couldn't quite penetrate the Lancer's shields [thanks to some obscene dice rolling and rotating Ion Shields] and it only lost 3 of its 27 wounds to the titan killing weaponry aimed at it. The Dark Talon was less lucky though, being wiped out by the superior airborne firepower of the Phoenix. I think the Jetbikes failed their charge on the scouts, thanks to killing a couple of the nearest ones.

Turn 2 and my Warglaive made it into the back of Ben's DZ, assaulting the other squad of jetbikes. The Lancer multi-charged the middle unit of Dire Avengers and the one on its left. 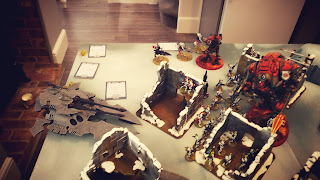 The second Warglaive went for the bikes going after my scouts and managed to take them down to just 1 remaining. Euronymous backed up the Lancer. 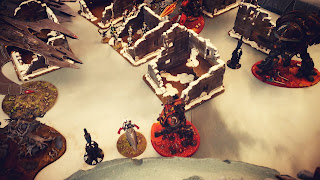 On the other side of the battlefield on my right I'd sent my Ravenwing to mop up some scout hiding in an abandoned farm. I think one of them had been killed in Ben's turn but they made a silly charge to get in their faces. 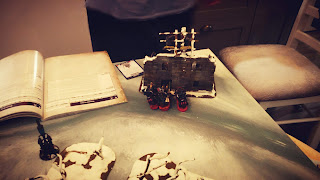 The Lancer stomped all over the Aeldari, while the Warglaive smashed the jetbike aside allowing it to consolidate onto the objective. 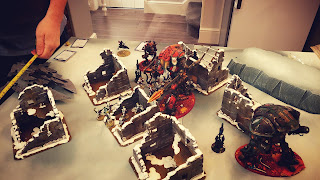 Ben's turn 2 and the Warglaive was left in the dust as the Jetbike move to oust the last scout from its sniper perch. 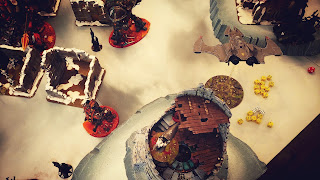 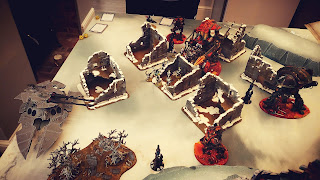 It targeted all it's weaponry at Euronymous and was able to strip 23 of its 24 wounds in one shooting. 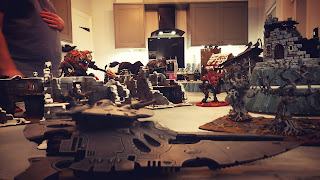 I'm not sure what happened next, I think the Lancer and Warglaive might have wiped out the Dire Avengers and the Scorpion might have taken some damage but it was possibly -2 to hit so perhaps not. We eventually called it but I think Ben was pretty downbeat about his chances. 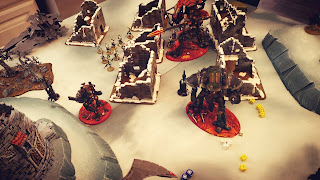 His lack of success with the Scorpion had dampened his enthusiasm for the LCO. It just hadn't performed quite as he'd expected. A Knight killer is one thing and it came close to deleting Euronymous in one go but with Ion saves and the chance to miss it's a lot of eggs to put in one basket, although the Warp Hunter is a fair support, having lost it first turn it never really got chance to add it's weight to the game. The Pheonix did OK, you can just see one of its wings in the pic above, I actually thought it had died, not sure if it did at some point but it was v. difficult to hit so probably not.

At the time I didn't realise Ben should have split his Dire Avengers into ranks, instead of groups alongside each other, that would have been a far better bubble wrap, but even so the dense terrain and many bodies meant I struggled to get my Knights through the village. It was an OK game in the end, Ben felt outgunned/outclassed, which is never any fun but at least we had a better idea of what was in store for us, bring on the LCO!
Posted by 40kaddict at 12:30