APOLOGIES - it would appear the text for the battle report I wrote within a week of the LCO somehow disappeared. I've tried to replace it but weeks later accuracy and details will be sketchier than usual [if that's at all possible!].

Dominik Brundler was my game 2. He had Mortarion, a squad of Blight Haulers, a couple of Drones, a fair few Pox Walkers a couple of Champions on Flies [I think] and a couple of Plagueburst Crawlers. For some reason I felt the Poxwalkers were a real priority - killable and sitting on objectives I didn't need them knockign around - that may well have been a completely stupid assessment 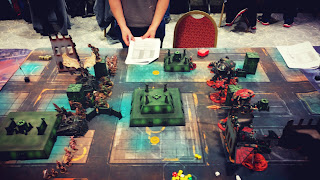 Once again I won the first turn and the Lancer sprinted across the board. I don't even think I felt the need to use Flank Speed as this deployment got him to their lines with ease. The Dark Talon Stasis Bombed the Pox-Walkers and with additional support took one unit out. I felt the Lancer could tie up a Crawler, a Drone and even the Blight Haulers. A Warglaive got in there too but despite some excellent rolling from the Lancer, putting wounds on the Crawler and Drone they both managed their invulnerable saves. The Warglaive also saw its attacks shrugged off by daemonic resilience. I had 3VPs for killing a unit, First Strike and holding an objective. 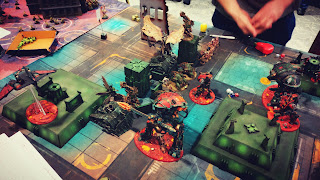 Mortarion swooped over the Warglaive to land between it and Euronymous with one of the Drones heading towards the ziggurat I had my Scouts on. 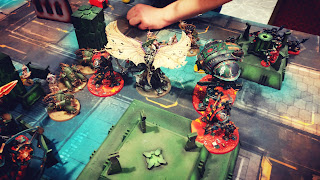 I think I was quite lucky in overwatch, hitting Mortarion twice, but I think he shrugged off the Thermal cannon shots. The Drone also made a huge charge to get in behind Euronymous and engage the Scouts. 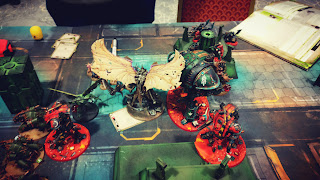 Morty absolutely eviscerated Euronymous with his scythe Silence. He had been on 21 wounds before the charge and they were all gone. But he did blow up, once again delivering more damage in death than anger [a theme for the weekend!]. The Scouts somehow survived. The Warglaive got smashed by the Daemon Prince and Blight Haulers, it may well have blown up too as we're missing a Blight Hauler. 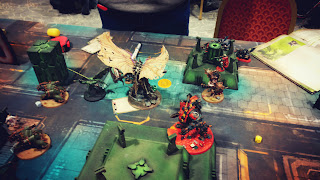 I think the fly initially whiffed his charge on the Dark Talon but a re-roll got him in. My overwatch was again hot, but so was its invulnerable save. 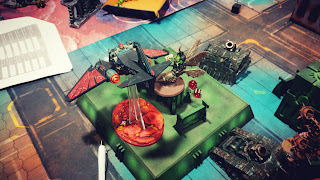 With the Dark Talon down to 7 wounds it did not take much for the fly's rider to slash the Ravenwing Flyer out of the sky. This secured 4 primary VPs for Dominik with kill 1, hold 1, kill more and hold more. He probably got First Strike and Slay the Warlord too, 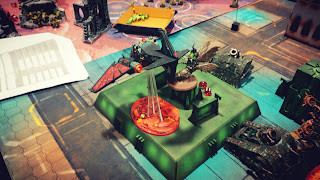 The Lancer fell back and charged Morty, with support from the last Warglaive while the Ravenwing tried to bring down the Bloat Drone. I'm not sure what I killed, possibly not the Drone, as it would end up in my back field next turn, but I killed something for a VP and held an objective for another 2 points total. 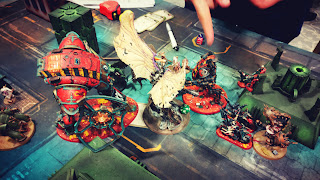 But the Lancer AND the Warglaive got trashed. It looks like the last of the Poxwalkers were killed, but with heavy armour to hold objectives the success at removing ObSec troops was moot, or even worse with the loss of all my heavy hitters. 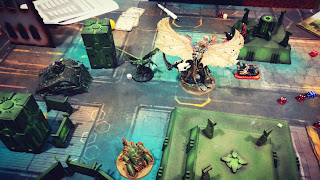 Mortarion swooped over to my back field and ultimately wiped out the rest of my army. 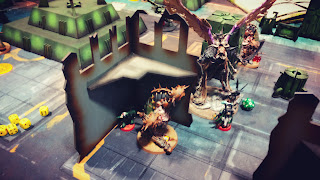 The final score was 39-7 to Dominik, he was quite apologetic throughout because his invulnerable saves were so successful, but my attacks were equally good, I can't complain. You take Nurgle for its resilience, there's no reason to apologise when it does its job. 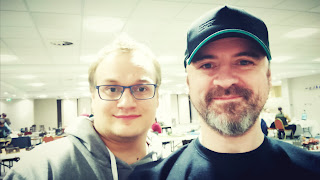 I may well have got my priorities mixed up, perhaps Morty is the number 1 target but he waltzed his way through two Knights and a Warglaive, I'm not sure what else I could have done. You probably need to commit everything to kill him and if he survives hope you are still far enough away to avoid a counter attack and hope you get a second chance. I should probably see if I can find any battle reports that deal with Morty and big invul bubble wrap lists 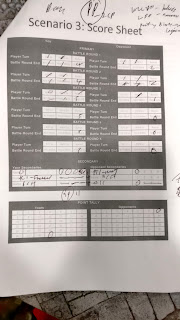 Regardless of the result it was a great game and Dominik was awesome, what would game 3 bring?