Next level? I think so. I couldn't help myself and did another load of damage on the right shin pad and I think I did a much better job than my first attempt. 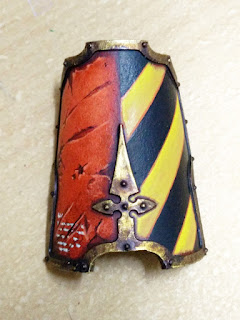 It's definitely helped mitigate my less than stellar litany efforts. I did however become unstuck because there are supposed to be house Raven decals on that red side and obviously I've now covered it with damage I don't want to cover up and then have to re-apply/blend in. So I think I'll abandon following the heraldry too closely. I suppose I already did that with the white stripes. 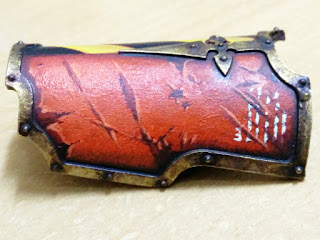 I also applied a bit of very bright yellow [not sure which VGC one it is]. Although I was loving the realism of the Tau Sept Ochre my love of high contrast means this captivates me much more now. Although I think I managed to be much subtler with the application than normal. 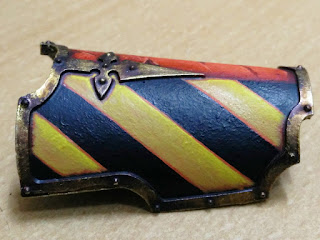 And so I had to add it to the carapace stripes too. I also added some litany script, which quite frankly I'm just relieved will be mostly hidden by his shoulder pad 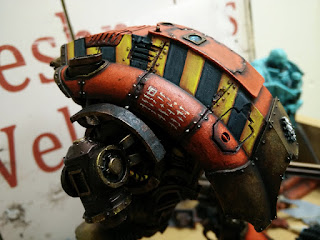 I was a little rougher with the application because there's no texture on this edge, trying to paint in some where it doesn't exist. It's passable, and again although the griminess has gone, I still really like it. 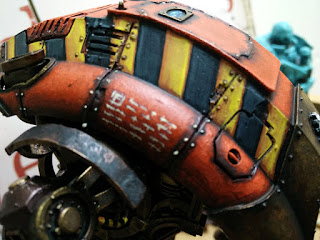 As you can see the shoulder pad does cover some of the litany. It looks a little misplaced on it's own, I feel the two panels either side would benefit from some script but being less than impressed with it so far I don't feel too compelled to add anymore disappointment in that aspect. 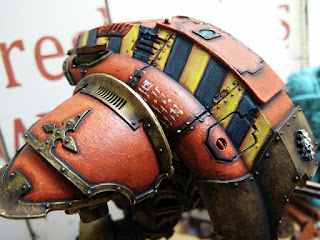 Here's the other side, where a Titan marking is equally MEH! For one aspect I was always so happy with on the Dark Angels and my Reaver Titan it's just failing here and I'm not sure why. 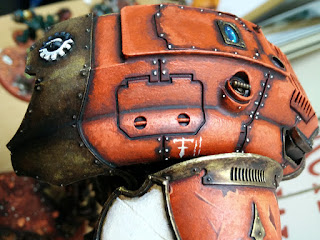 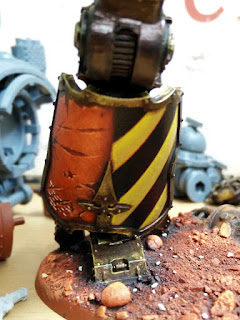 I think it's time to try some decals next. Haven't used them in years and part of me doesnt want to - given the freehand nature elsewhere, but they're so nice I feel it would be rude not to.