Support your local blogger - If it wasn't for ones 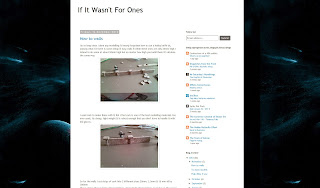 It's been a really long time since I asked folk if they wanted a little spotlight on their blog from my blog. I thought it'd help them out and also provide me with something to share when I didn;t have any content but sometimes it took just as long to write a post about their blog than perhaps writing a Battle Report, well, not that long but it eventually become something easier to not do than do.

But I decided to at least crack on with some of those who orginally asked post  Frank O'Donnell of http://ifitwasntforone.blogspot.co.uk put his name down and he's always been a big supporter and commenter ont he blog so I decided it was about time I showed him some support in return. His blog has changed quite a lot and recent posts suggest he's given up 40k [is that still the case Frank?] but that doesn't mean there isn't a host of 40k content on the blog you can't still access.

You can also enjoy his many current posts on other games and there's also a whole host of interesting terrain building articles in case you're hankering for some hobby inspirations. So please do check it out: http://ifitwasntforone.blogspot.co.uk
Posted by 40kaddict at 12:08