First game up and it was NafNaf from Objective Secured and I can't tell you much of a thrill this was. Although Blog Wars is no longer primarily a competition for bloggers there are still a fair few that attend. But blogging in general can be a little disconnected, occassionally you will meet people who follow your blog but I often feel a little awkward socially, afterall I use share far more here than I probably would in a normal conversation but by that stage the reader will always know more about me. In this situation though we're both familiar with each other's blogs and we had plenty of time to chat and just enjoy a great game.


The low down:
So yeah, it looks like I stole the initiative, I don't even think I needed the +1 Warlord trait. That's always thrilling but equally uncomfortable as you're setting someone up to suffer quite badly [especially with two flyrants]. The Flyrants swooped forward and peppered the smallest unit of Thunderwolves with Brainleech Worms. The Storm Shields, high toughness and multi-wounds were not sufficient to stop them becoming worm-food though, securing me First Strike. 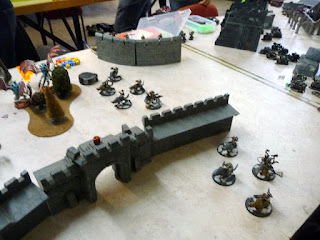 As I knew Drop Pods were inbound I'd deployed in a star formation on the Skyshield - ensuring nothing could land on the pad and everywhere else was putting it further away from the centre of the pad or risking dangerous terrain. Hardly anything else moved except the Carnifex but I did spawn 12 gaunts to further disrupt incoming troops. Having loads of Warp Charge I had 2 points left over so decided to cast Dominion on the trailing Flyrant to keep the Carnifex in Synapse. I got doube 6, and then rolled 1 on the Perils! Luckily I passed the Leadership test, but I took a wound and fell out of the sky. My luck held a little further as Catalyst prevented any damage from the crash. 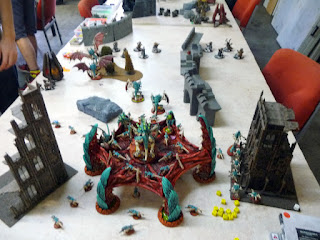 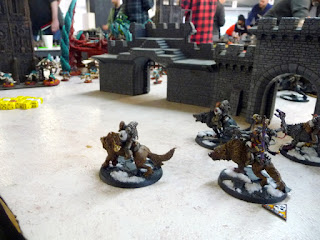 Drop Pods arrived, surrounding the grounded Flyrant and eyeing up the Carnifex. 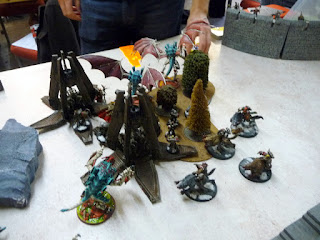 Huge amounts of firepower went into putting the Flyrant down, NafNaf getting First Strike in revenge. 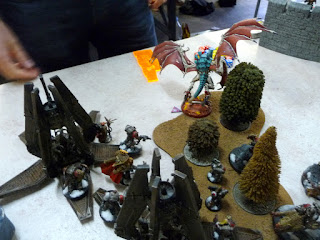 He was then able to kill the Carnifex too, securing a much better first turn than I'd had! 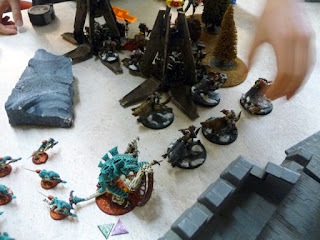 My turn and the Warlord Flyant banks right and swoops across and positions to Psychic Scream both Thunderwolves. My Spore Pod also arrives with the Rippers inside. 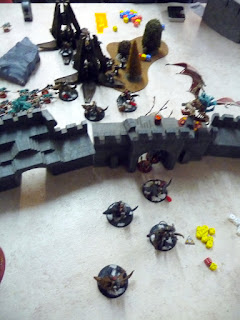 I spawn another 8 gaunts to take the place of the 12 who now charge down the Thunderwolves. They're backed up by the Carnifex 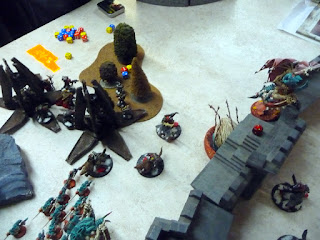 Ultimately they don't survive all the shooting involved. 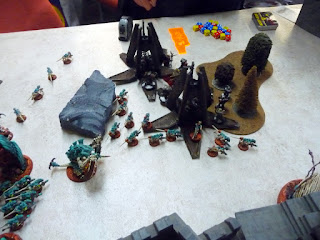 The other Thunderwolves only take a single wound from Psychic Scream. 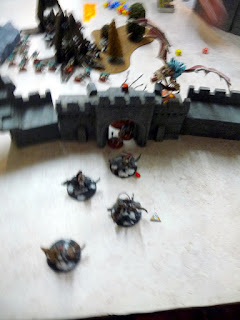 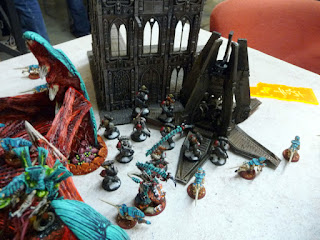 No real reason for this shot, just wanted a model eye's [or should that be gaunt's ass] view 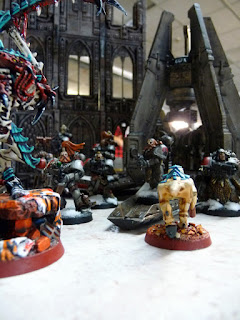 I think I may have cast Warp Blast on the Zoanthrope to try and blow up the Drop Pod but just managed a glancing hit! 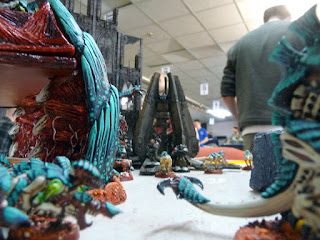 So that was still gaining Linebreaker. 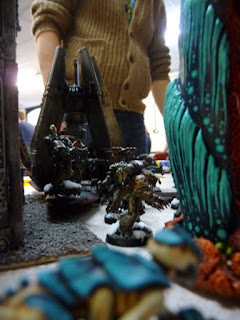 Nafnaf's turn and the Stormwolf arrives, targeting the Warlord Flyrant. He swooped and jinked but couldn't evade the hail of fire dying on that pitiful saving throw. Slay the Warlord to Nafnaf. 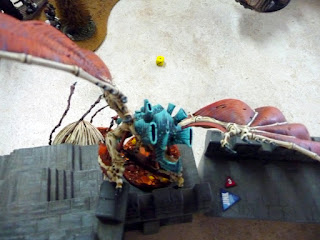 Thunderwolves charged the last Carnifex. I'd been extremely lucky with overwatch, the night before I witnessed 6 snapfire shots in one of Otty's overwatch. In one of mine I managed 9 after re-rolls and had had a 7 or 8 earlier that only transformed into one saving throw! 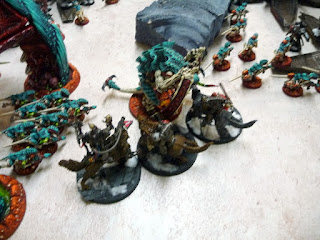 Sadly it wasn't enough and the Thunderwolves burst the Carnifex apart. 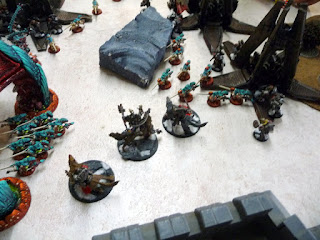 The other marines took on the spawned gaunts. 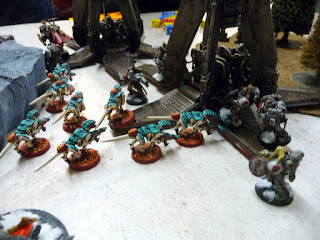 With the Thunderwolves out in the open the Children of Cryptus set their sights on new prey. 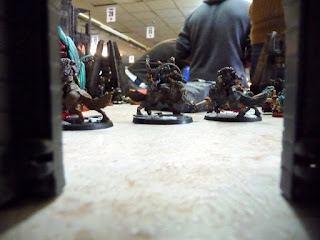 The swarmed the Thunderwolves killing most of them 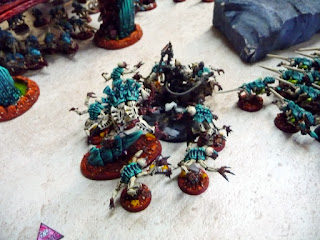 My Mawloc had deviated into a position of little use so I burrowed it. Deathleaper tried to kill off the Grey Hunters in my deployment zone but was butchered due to his patheticsaving throw. Luckily the Termagants killed off the remainder. 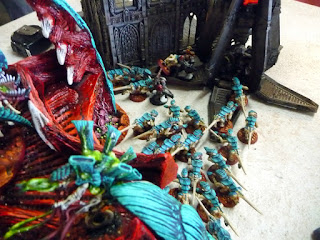 Last turn, the Children of Cryptus killed the Thunderwolf, Rippers were 2" away from securing Linebreaker for me and a unit of 13 spawned gaunts also got killed and time was up. 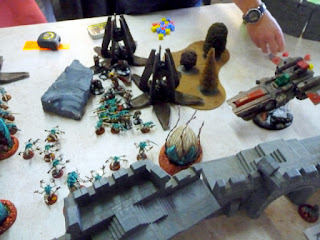 I was feeling pretty confident at this point because I thought I still had a lot on the battlefield but forgot how expensive the Flyrants and Carnifex were. Ultimately I'd lost 1110pts of models, plus another 100pts for Deathleaper and Nafnaf got Slay the Warlord for the Flyrant, Linebreaker and First Strike. I'd managed to do 1070pts of damage, so it looked like a draw, until I added on the Deathleaper points and then realised I'd only got First Strike, been short of Line Breaker and Failed to kill his Warlord and SC who was with the Terminators! The most annoying thing about this was the Mawloc, having put him into ongoing reserve he was counted as a casualty - 140pts of losing me the game was his only contribution! So if I hadn't have done that I;d have scored 970, plus Deathleaper = 1070 and only the secondary VPs would have lost me the game! I should have just deep struck him in Nafnaf's deployment zone.

Additionally, if I hadn't cast Dominion on my Flyrant, which I only did as an afterthought because I had two spare warp charge, he'd have not died. It was a stupid thing to do, obviously hindsight is 20:20 but he'd have probably survived the next turn as he'd have been swooping and unlikely to be offed by the terminators.

I only say all this because despite losing [when have I ever won a kill points mission?] I know it was my mistakes that did me in and that makes me think I can always improve by not making these stupid errors. More importantly though it made the game incredibly close and excting and coupled with Nafnaf being a pleasure to face across the battlefield it was such a good start to the day. In fact snatching defeat from the jaws [of the world wolf] of victory actually made it more memorable. I will never forget those mistakes, I will always have this tale to tell, could I say the same if I'd passed Dominion? Unlikely. Would I be pleased if my Mawloc was still 'alive', possibly, I may not have made the connection to him contributing to an 'epic draw', but having been classed as a casualty I can definitely say he contributed to a close loss. A great start to the day, now who's next