As I finished up my second game I nipped over to see Otty and how he'd faired and his opponent was a really nice guy called Tobias who'd travelled with his friend Hendrik for Germany just for this event! Not only that there'd been an airline strike and their flight had deposited them at Heathrow, London, instead of Manchester airport! So, huge credit for our German colleagues who travelled all this way to game. 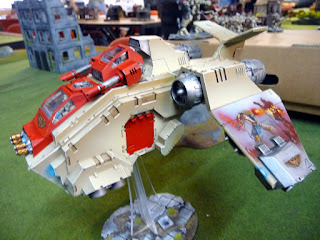 Their armies were spectacular though and it transpired that both Hendrik and Tobias use the services of Den of Imagination, hence why they didn't enter them in the painting competition. Tobias's Grey Knights were at the level 4 [of 6] quality and I was really interested in the process, timescales etc. Not because I envisage a time when I can take on commission painting, just genuine interest how you go about the process. 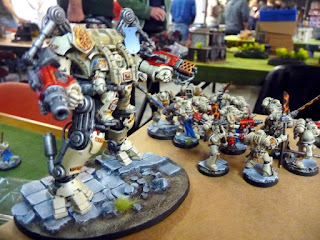 The highly amusing thing you've already no doubt cottoned onto was that as the tables were revealed we discovered that Tobias and I had been drawn against one another and actually I think Otty faced Hendrik [who I believe already follows the blog so hi Hendrik!]


So a shedload of Horror for some essentially fearless Knights!

The low down:
Maelstrom games are always difficult to report on so please bear with me on this. Tobias set up with a Dread Knight in the trees top right, securing and objective and the Land Raider holding the middle one and a Dreadnought behind the ruins holding the third. I had one under the Skyshield [obviously] on the left in the native village and one in the rocks in the middle of the board. Infiltrators helped me secure these three and give me a launching points for the left and middle objectives. 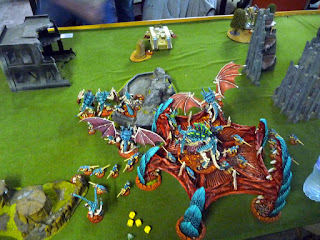 Tobias rolls 16, 34 and 12:
He's already holding 3 objectives so without moving he can get 2 points and one of those is objective 6 too which my gaunts are holding, so that's 2 points pretty much in the bag and another 2 potentially. But first these guys materialise next to me. 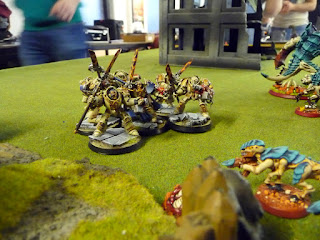 Followed by their big brother 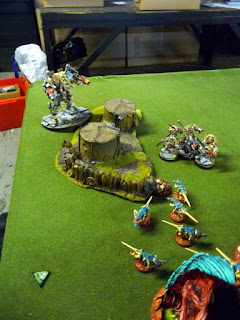 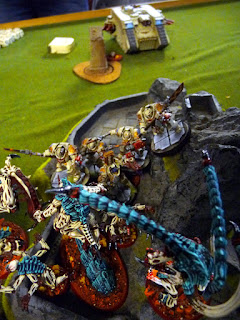 And another group, but they mishap onto my Genestealers and I get to place them anywhere on the board. My initial thought is in the far right where they can do no harm [or good] but then I think why not be sporting so I position them on this rooftop. They're 6" from the ground, they can still participate if Tobias wants them, it's just less mean spirited. No doubt I'd live to regret this. 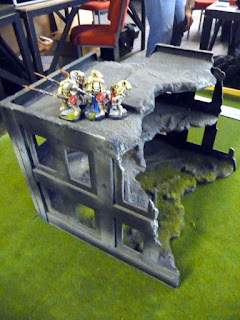 Another unit lands behind the terminators in the location the mishap squad intended to occupy [lucky they deviated ;) ] These units then rip into the gaunts and manage to shoot them off the objective. 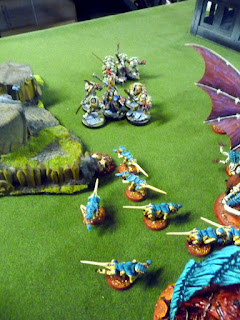 Which allows the Dread Knight to capture it. There was a really cool moment at some point where we were trying to work some rules/objective thing out. Obviously Tobias had a German translation of the rulebook and I did mention the German for 4 which pleased Tobias no end and he asked if I knew German and with hardly any hesitation responded "eine kleine" so we couldn't help ourselves laughing at it. He was certainly happier with my rudimentary attempts at his language than any of the French were when I was in Paris [just saying]. The Genestealers also got a bit of a roasting. 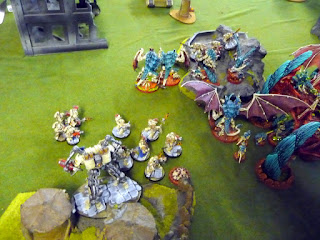 My turn and I get: 31, 25 and 23
So, no objectives, linebreaker points but nothing that can do it this turn and still be scoring, a Storm Raven due any minute but what are the chances I can down it with S6 Devourers? So my only option is the hero. I pump all my weaponry into the squad of Terminators holding objective 6 which includes 'Stern' his character [that may be his German name, not sure]. I manage to get lucky and wipe out the entire squad, get First Strike and my 'Blog Warrior' VP. Sadly I didn't realise until about half an hour later that the spot prize for this game was Blog Warrior and I probably would have won it but by then it had been claimed :( 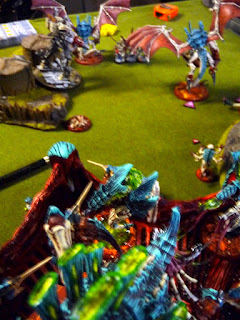 The remaining tyranids focused on the Terminators in the rocks. The Carnifex did some real damage, shooting them down to two Knights. 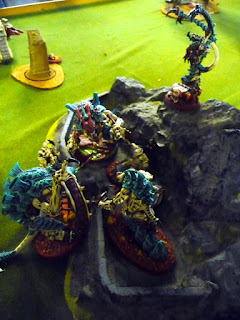 Then the MCs, the remaining Children of Cryptus AND Deathleaper charged the Knights but I think they were dead with Hammer of Wrath before even the Spawn or the Lictor could do anything! This did give me a nice consolidation move. Now I did realise after the assault that I'd missed that lone Genestealer at the back. He'd been hidden by the Flyrant in Tobias's shooting and so I'd started taking majority toughness of 5 on the brood earlier than I should. When I spotted this I just decided to treat him as a casualty and didn't move him for the remainder of the game. Lastly I discarded the flyer objective with the score 4:2. 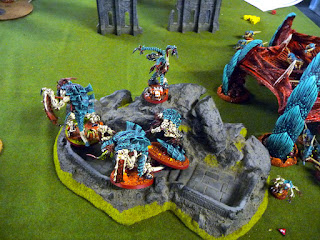 Tobias rolls: 26, 31 and still has 12
Storm Raven arrives, he does some shooting at the Flyrants, can't see if it took wounds but I'm sure it  jinked and I know those kindly repositioned Grey Knights on the rooftop shot somebody, either this turn or in the first turn! It looks like one of the Carnifex fell victim at least so that was a VP for Big Game Hunter. 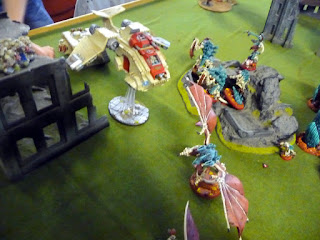 One of the Dreadknights jumped over to the remaining Carnifex, squashed him flat and consolidated onto the objective. Tobias was also behind enemy lines so scored 2 VPs and discarded objective 2 as he felt it was unobtainable [not sure which one it was]. 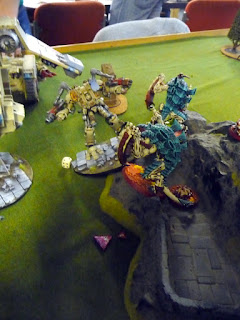 I had 31 still, and rolled 13 and 24
My Mawloc turned up and for once I was able to use him effectively, I got him to deep strike perfectly thanks to Deathleaper. He hits the Dreadknight but doesn't wound, he pops back down and then up again wounding him once. Here's where ordinarily I'd have said well that's it but then I realised that he's positioned within the blast [and can be within 1" of a model] so because the oval base can fit on one edge you can still deploy so long as the blast just clipped the other model. So I 'get' that he's less likely to mishap now, but they're still pretty pants. Anyways, I manage to secure objective 3 for the 2VPs I also shoot a character, not sure if it's one of the guys in the unit atop the ruined building but they fail a morale check and spectacularly run 12" back to their board edge. I'll just forge a narrative here that the Brainleech worms riddled the roof and they literally fell through two storeys before they dusted themselves off and headed for safety! Alternatively I may have managed to kill a Dreadknight because I know we discussed them being Characters. 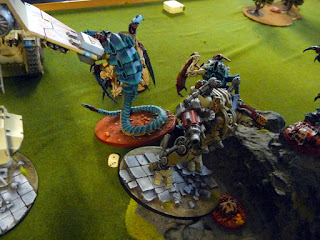 Tobias rolls: 32, 13 and 11
Tobias was able to get objective 1 and discarded objective 3 as I was clearly ensconced on it [think it was the skyshield] and he'd have no chance to capture it.

I had 31 still, and rolled 16 and 22
Tobias is on 8VPs and one secondary at this stage, I'm keeping track of the score but I've not worked out what I need to do to win, lose or draw. All I focus on are the missions in my hand and the clock running down. The Flyrants swoop onto the roof of the building, I think the killed the remainder of the squad below which gets me the psyker VP, objective 6 is the one by the native village in my DZ so I easily recapture that and somehow I manage to get a model into Tobias's deployment zone netting me both Linebreaker and my 'behind enemy lines' victory point. 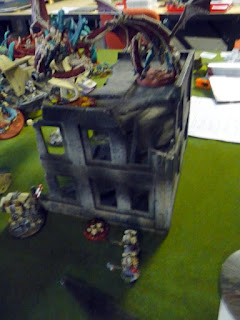 So in the last turn I managed to score 4 VPs and a secondary VP. We tot up the scores and I've just managed to snatch a win, 11:9! It was such a close game and I had such a great time, it felt like an honour to be able to play this guy who'd travelled so far just to play games. As we finished there were a load of fireworks outside, belated Guy Fawkes celebrations which Tobias asked about, which was an interesting discussion to explain. It was a real cultural exchange and as I packed up I tried even a little more of my rusty German which both Hendrik and Tobias helped me with. Not that I'll ever need to describe how a washing machine wrecked my jeans but it had been part of my GCSE German exam and I'm still repeating it incorrectly. They tried to help me say it right after about 24 years, I couldn't get it, but we had a lot of fun trying. 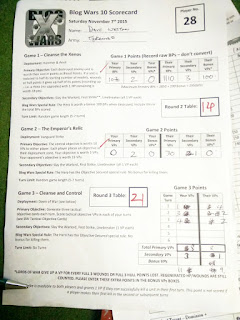 I can honestly say this was the best Blog Wars ever. I felt privileged to be apart of it. I had a great night out with the guys, they all won awards I had three great games, met some really nice people, both on and off the gaming table and at the end of the day I went home without even looking where I placed. I mean obviously I was on one of the bottom tables so I knew it wasn't going to be great but it honestly didn't even cross my mind to check and I think that says it all. Although Blog Wars is dead, I hope the spirit of Blog Wars lives on in Alex's next venture because it's my kind of tournament.
Posted by 40kaddict at 12:36