A nights work? I struggle sometimes to reconcile how I feel so much satisfaction for so little output, but I made a damn decision, actually I made two, so that's definitely satisfying. I decided to have a crack at some damage and to do the white stripe on the chest piece too, and they were the right decisions. The battle damage is all freehand, no sponges just making choices of where to put damage. That may come back to bite me as I'm sure it'll look contrived somehow, but the results [even if the highlights are a bit mixed up] speak for themselves. This just went up another level and I can't wait to do more. Yet I have to wait, as I need to add on litanies and any decals or freehands first so I can then add further battle damage over the top of it. But it's really broken up the highlights of the panel, which where a bit rough and patchy in places and this helps draw focus away from the deficiencies.
And the stripe too came out much better than expected, I'm also thinking of putting the white Metalica decal below the stripe, I think that would work really well if I can also manage to tone the white down a bit. 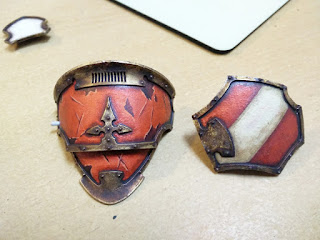 To add to the 'extensive' progress I made in one evening I also weathered my pylon [ooer, missus!]. I only did one of them and a teleport homer and although I'm loving the effect I think I've gone overboard in some places so it looks less like weathering and more like there is some kind of St Elmo's fire surrounding the pylon. That isn't a bad thing really as I could imagine the energy discharge doing just that, but it's both effective and dubious[?] at the same time. It's mentally jarring at the very least, it just makes me question what I'm seeing that's all, I like it I just don't know exactly what it's conveying. Not that it matters, it is what it is and now I just have to patina the other 4 markers. 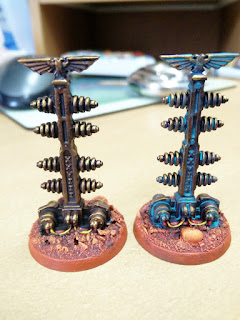 The only other question is do I add some lighting effects on the emitters? They would be yellow/orange like my Tactical squads plasma coils I've got to add some red lighting effects on the teleport homer beacons which I'm hoping will help me come to terms with the lighting I'll use on my Ravenwing but I don't know if I should do the glow on these... so much for being decisive!

Well, to prove it wasn;t a one off I made another decision the following night. I started work on some chevrons on the Cerastus right shin guard. I used my one of ever-handy coffee stirrer sticks to set the width of the stripes. I think I started penciling in the line just below the horizontal leaf on the central bronze reinforcement. I didn't want to go through it and luckily the stripes seemed to fall quite evenly spaced. 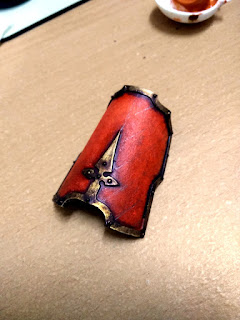 Given house Raven is predominantly black as an accent I chose that as the dominant colour. I then filled in the alternate stripes with my still remaining watered down Mecharius Solar Orange. 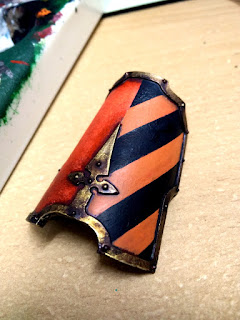 Then Iadded watered down Tau Sept Ochre which doesn't look particularly yellow in the pot but looks positively lemon here. I tried to be a bit rough with it to allow some of the underlying tones to show through but in comparison to the crapace stripes this is much more opaque. I will add a very thin highlight on the top edges of each stripe and then use washes to try and tone it back. I'm hoping thte shading will increase contrast so I don't have to do too many highlights. I do really like the texture that's still apparent from the Vermilion craft acrylic, that's definitely a regret I didn't do the carapace that way and instead went straight to the chevrons. 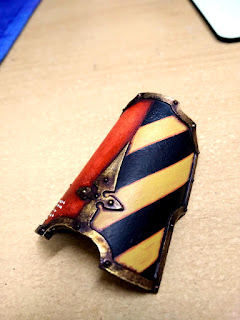 You may also just note there is some litanies on the left of the shin pad, I should have taken some pictures as I'm less impressed with the results. I did some Valejo Heavy read before I applied Bonewhite. This was to ad a bit of shading  and although I usually do light-grey litanies I thought sticking with bonewhite would help tie some of the colours together. I even highlighted them a bit but I think the extra painting has reduced the sharpness and details. Hopefully I'll get better at it and then the battle damage will obscure the worst of my efforts ;) So although slightly disappointed [yes, I am my own worst critic] this was good progress and highlighted areas that will prove challenging.