Game 2 and I'm facing Kyle McSweeney and his Dark Eldar/Eldar. Now we know how good Eldar can be and I'm 50:50 with their darker kin, having suffered at the hands of Liam and my first tabling ever at Throne of Skulls but pulling it back to win objective missions at Blog Wars 6 and the Scythe and Teacup tournament. These were 6th Edition games and Codices so there's a lot of change to overcome.


The low down:
We spent a significant amount of time deploying, my Warlord trait made Kyle debate long and hard over positioning and once he'd got everything just right I then had to think long and hard too because his deployment was so good it made my trait more of a hindrance. I also knew he had a DE Archon who could confer deep-strike on a unit and he was doing just that to Wraithguard with D-Weapon flamers and Prince Yriel so I'd deployed in the star fromation again to help mitigate his arrival. 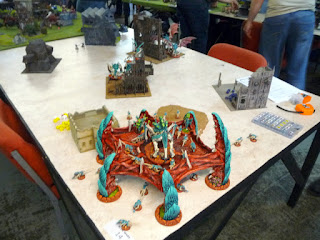 I was able to swoop my flyrants forward I must have killed the unit of Dark Eldar in this ruin, despite going to ground as I'm sure I got First Strike. I even put a wound on the Wraithknight! 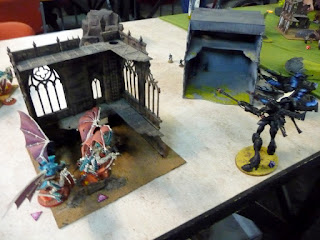 My Carnifex had contibuted to the Dark Eldar First strike but the Stealers and Deathleaper remained skulking in the ruins to hold onto the 10pt objective. 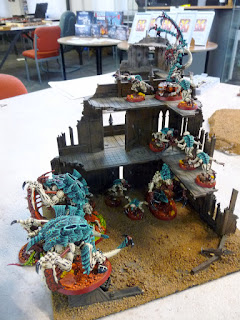 While my Tervigon and gaunts [spawned out on 16] secured my own 5pt objective underneath the skyshield, which Kyle had immidiately predicted would be my tactic as soon as he saw the fortification. It does make me equally happy that someone is aware of it's effectiveness and disappointed they're working out a counter attack. 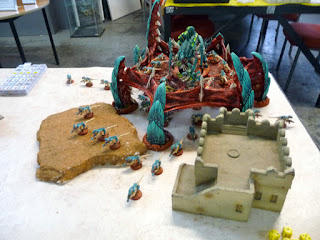 Kyle was able to put a couple of wounds on the Carnifex but no First Strike. 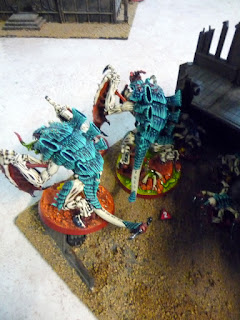 My turn 2 and both my reserves arrive. The Mawloc appears inside the ruined factory, the Tyrannocyte deviates but the Rippers get out and hide from the remaining Dark Eldar and jetbikes. Not much happens, I do some shooting and feel quite proud of myself as this seems relatively painless and dare-I-say-it 'easy'! 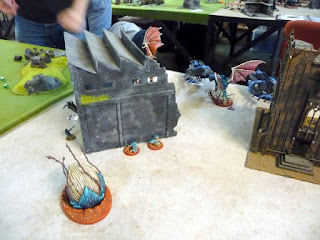 Oh $hit, yeah. Why had I forgotten about the four Venoms, and two Ravagers and the deep striking Wraithguard?! Wraithgouard arrive spot on, all clustered perfectly on the roof of the building next to the Skyshield. Why had I not thought to deploy something there? 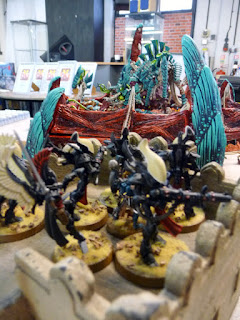 Kyle d-templates everything he can, desparate to kill the Venomthrope. It's 'key' to his plan apparently but the flamer just can't do it. Plenty of Gaunts get obliterated but it was the many splinter shots from the Venoms that eventually cut through his spore cloud to kill him outright. Now I'm reliant on the 4+ invul save to keep me alive. 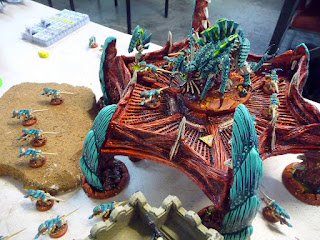 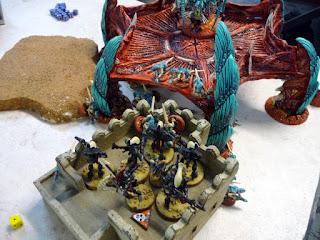 The Tervigon backs up, trying to keep as far away from the D-weapons as possible. The spawned gaunts cluster round the objective underneath hoping to hold onto it. 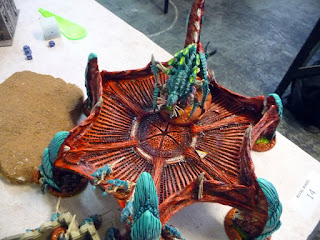 The Venom's have other ideas, weight of fire pops the Tervigon, taking most if not all of the spawned gaunts with it. The other Termagant brood continues to claw ineffectively at Yriel's Wraithguard their numbers culled by the los sof their brood mother. 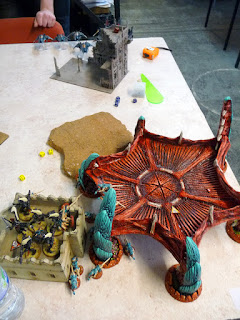 More Venom shots cut through the two Carnifex, leaving the last one with just one wound left. 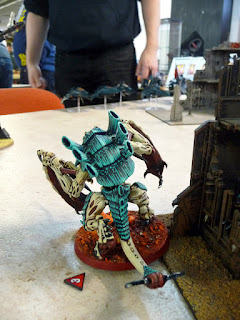 Which is removed by the Wraithknight, who;d been singularly unimpressive for most of the game, either missing or failing to wound. 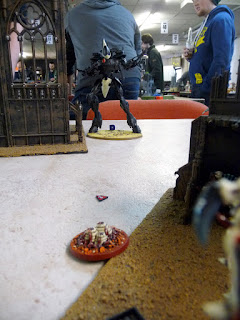 My Rippers were unceremoniously erased from existence also - double strength weapons insta-killing them one after another. 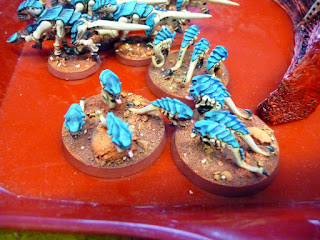 Wraithguard and gaunts continued to have it out but the Gaunts ultimately perished. The objective underneath the Skyshield was wide open now and he hard Venoms waiting to capitalise on it's exposure. 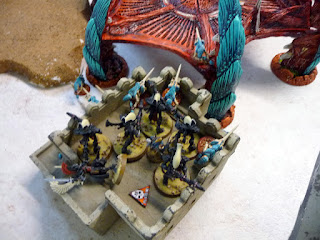 My Flyrants both swooped back to my Deployment Zone and I was able to riddle the Wraithguard with Brainleech Worms. 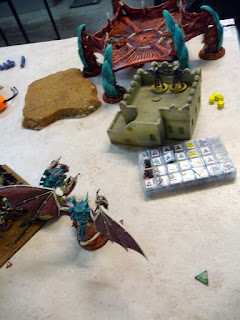 Yriel, the Archon and most of the Wraithguard died giving me Slay the Warlord [at least]. 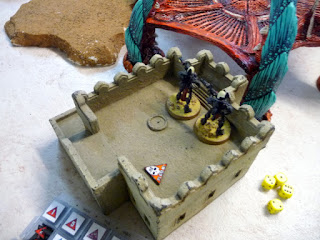 The Wraithknight jumped in to contest the centre objective, it was all falling apart now. 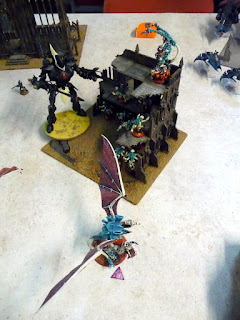 Venoms screamed across the battlefield heading for my objective. 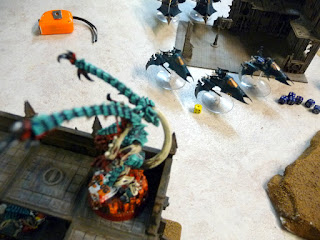 Fitting with ease under the safe canopy of my own fortification! 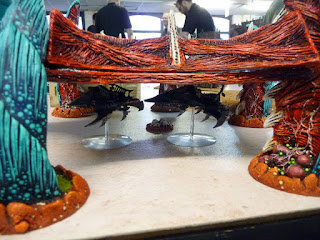 The centre ruin became a fierce battle. I'd moved Deathleaper down but then the Ravagers got a bead on him through the window and insta-killed him. He'd been invisible stood on top of the ruin all game, as soon as he changed position he was toast. The children of Cryptus swarmed the Wraithknight putting another wound on him but getting stomped in the process. The Venom digorged it's Dark Eldar warriors who got savaged by Brainleech Worms, but not enough to lose the objective. 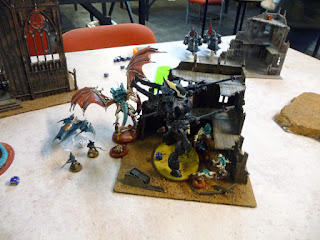 My Mawloc had popped in the Ruins second turn, burrowed back down and then deviated here to miss the venom. 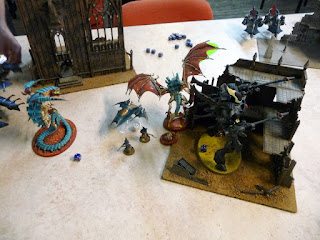 Time ran out and Kyle had secured all the objectives and got Line Breaker and I'd managed lose everything except Slay the Warlord and First Strike! So a 31 to 2 loss. That sounds so painful but once again so much pain happened so quickly there really wasn;t enough time to feel miserable about it and Kyle was such a good player it wasn's depressing in any way. Really I only had myself to blame as I forgot he had most of his army off the table and went for his objective which put the Flyrants completely out of position, taking them too long to Swoop back to defend my own base. But this was his plan all along, to draw out the Flyrants and then attack my Skyshield with the Wraithguard - kudos to Kyle for planning and executing that plan to perfection. So 0 for 2, can I scratch a win in the final game
Posted by 40kaddict at 12:36