Happy Hallowe'en!
Second game was Crusade, Hammer & Anvil deployment [surprisingly this really does your back in]. My Warlord Trait was Co-ordinated Assault, +1" to charge range.


Jim Klapkowski brought a really nice Ravenguard army to the table with:

Given the deep striking nature I positioned my ADL with one edge taken up by a ruin. With five objectives, one in the ADL with my Devgaunts and Warriors as support and Synapse/Fearless, the other objective in the ruin with the Toxin Stealers. Right about now I moved something under the table and knocked over my pint glass of water that spilled towards Jim's bag and coat, not an auspicious start and certainly no way to introduce yourself to a new opponent, i felt like such an idiot 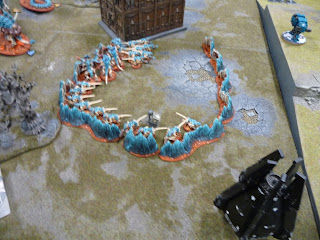 Anyway Jim was gracious with my clumsiness and played on positioning one objective amongst his bikes in his Deployment Zone [DZ]. 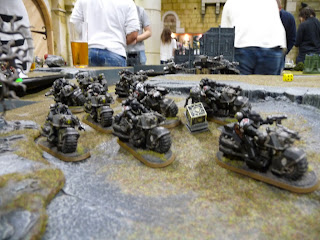 The other objective in the Ruin next to his Land Speeders. 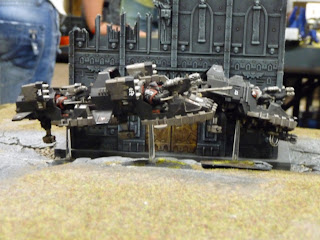 I'm guessing from the picture I got first turn. The Troop Tervigon spawned 7 gaunts back into the ADL to add more support in case of drop pods and with two objectives I hoped to free up the Stealers to do more damage elsewhere. The HQ Tervigon spawned 9 but given how crowded the ADL was getting they had to spawn forwards and head for the woods where the final obective is. The Trygon and HQ Tervigon were Endured and both Tervigons were Warp Speeded. 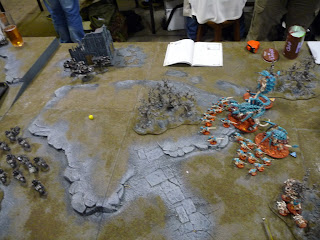 Jim's turn and the Drop Pod with ttactical squad and Librarian pile out. 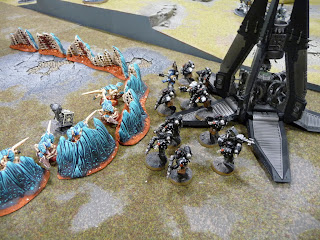 Flamers, psychic powers and all manner of bolter fire lay waste to 7 Devgaunts. 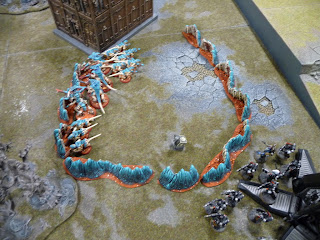 The Trygon suffers 5 wounds from the combined Land Speeder fire but thanks to Endurance weathers the storm. 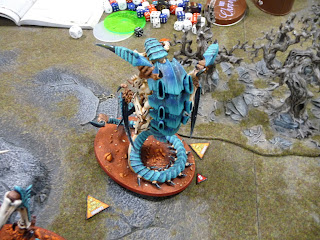 The Land Speeder's are becoming a real thorn in my Trygon's hide - they have to go! 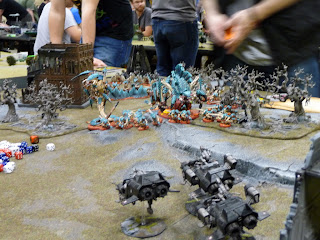 My turn two, HQ Tervigon spawns 12, not sure what else I recall the Toxin Stealer getting snake eyes at one point on a psychic roll. Obviously this drop pod arriving is from Jim's turn two which is later on. 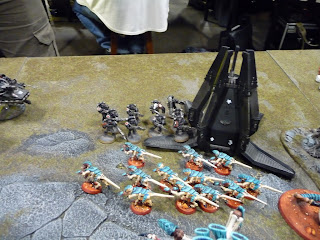 I forget to bring the Doom of Malatai on. The Trygon recovers 2 wounds thanks to Endurance [fast becoming my favorite Biomancy power, it's like regeneration but cheaper, better odds and Feel No Pain too! you just have to roll it in the first place]. 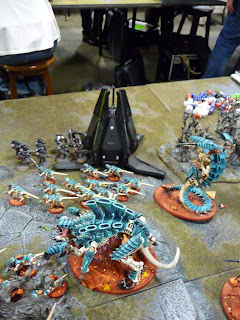 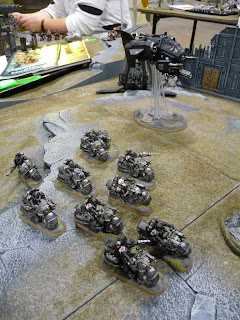 Bikes target the Hormagaunts in the wood and kills them, maybe receiving First blood for the effort. 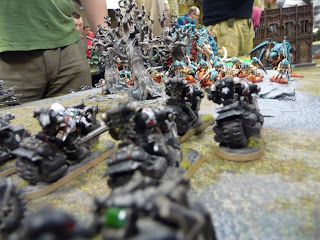 The Devgaunts in the ADL had previously moved back behind Tyranid Warriors so as not to lose First Blood. The warriors therefore take the brunt of the shooting from the Tactical squad and eventually two die. 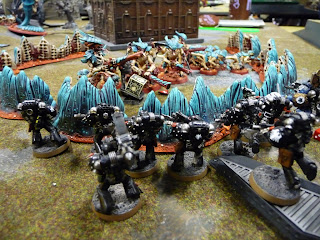 The Storm Talon and Speeders target the Trygon and managed to shoot past his Endurance and he dies. The second Tactical Squad kill 6 of the 12 Termagants nearest to their Drop Pod. 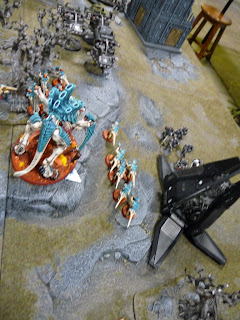 The Tervigon suffers 3 wounds, from something. 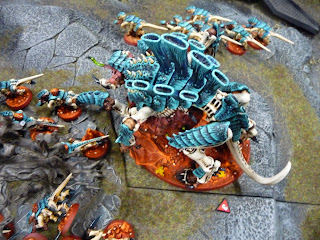 The final Hormagaunt is also gunned down, things aren't looking good this side of the woods... 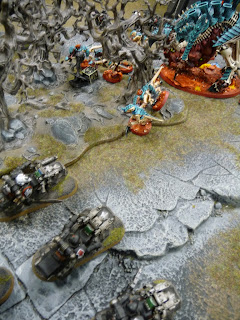