Here's an update on my frosty figures. I obviously searched a bit for advice and received some in the comments. I thought I'd try a couple of solutions to see which was most effective. First up was acetone - nail varnish remover. I can't help thinking that's going to be difficult to put on without removing all the paint and I didn't actually have any. But I had a quick idea that liquid poly glue - ketone, which is like acetone might achieve the same thing and I have quite a bit of that and with a fine needle glu applicator I can drop it on. Tried it and it works, in a fashion.

Where it pooled I tried to whick it away with a corner of card, even that light touch allowed the paint underneath to melt. However, where it was left seems to have dried, unfrozen the frost and left it with an ultra-glossy finish, I mean hyperglossy as you can make out on the Tyranid hoof below. That white spot is pure gloss sheen! I only applied it in small places - pipes, hoof  and thorax but where the glue soaked into the Purity Seal you could actually see it working, like the frost was having hot water melt through and where imperfections existed they just melted away! 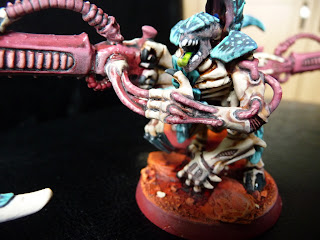 You can see the gloss on the adrenal gland thorax join here. 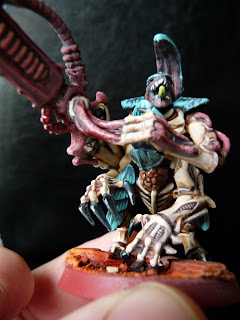 These pics show just how frosty the Hive Guard got, I know it could have been worse but this was still disheartening. The next option was to try Da masta Cheef's organic solution of Olive Oil. 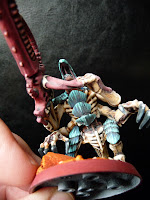 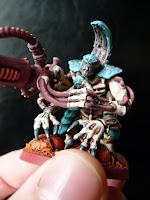 WOW! I couldn't believe this. It worked, and it enriched the colours greatly. Sure it's not matt, but it's not quite glossy either and I really like the finish. With results like this I half fancy doing everything without bothering with any further tests. I've tried to brush away any excess and it doess dull the sheen a little bit but somehow it looks all polished again an hour later! 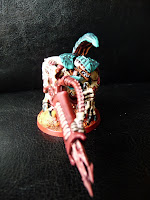 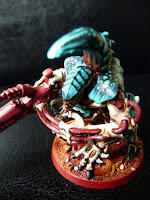 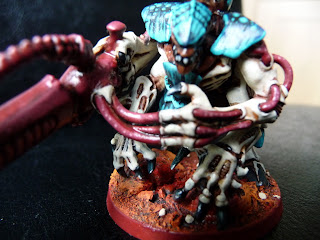 Theses are the worst affected Devgaunts, I will try some of the other options on these when I get chance. 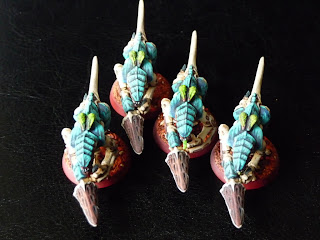 The Devourers took the worst of the frosting, hopefully we can fix that. 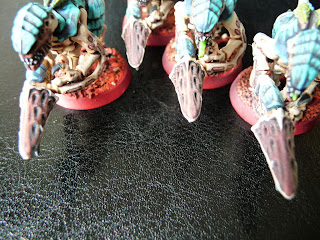 I'll get round to testing/fixing these as and when. 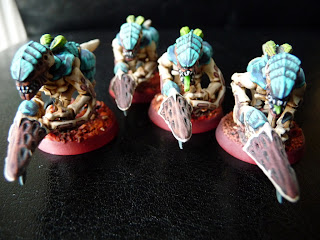