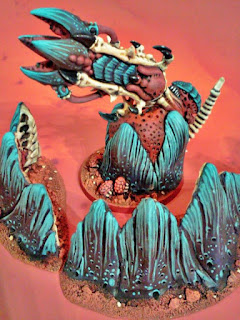 Ever since Fortifications became an entity in 6th and the first FAQ came out there's been a big question over Tyranids and their ability to use emplaced weapons. Of course the initial belief back in June was that they couldn't as the FAQ quite clearly stated:

Q: Are tyranid units inside buildings subjected to instinctive behavior and can they manual fire emplaced weapons.
A: No to both questions
However as hyv3mynd pointed out on his blog synaps3 the Aegis Defence Line isn't in a building, it's in 'battlefield debris'. These 'gun emplacements' do not have the same rules as 'emplaced weapons', in fact they don't autofire and can only be fired manually. The main reason everyone is keen to field such items is to combat flyers. With so few items that can hit them reliably a quad gun is a G.O.D.-send. But the FAQ, and lets think for a second just who was 'frequently asking' this question in June, before 6th came out? kind of dumps on 'nids, no other army seemed to get singled out in such a fashion. Then again we've been in this situation before.

The question is if they are not able to use them why not? Is it that access to long range high AP weapons, like the Quad Gun and Icarus Defence Laser changing the fundamental dynamic of the army? If so, haven't they seen that allies does that [unless you're nids of course]. Now you can potentially match whatever army you have with another force that can fill the gaps in your primary forces abilities. So no longer are you choosing a force for one specific type of play.

Hopefully, this is just another oversight on GW's description. I obviously went on to finish my quad gun off and aimed to pose the question to the FAQ folk in advance of Throne of Skulls and hopefully it wouldl swing in my favour so there'll be no arguments. Of course if it didn't I'd have wasted time, effort and a decent Tyrannofex weapon I could have offloaded on ebay! I certainly didn't want to be arguing semantics on the day as some are less than convinced of the above 'they can' argument, although plenty of forums seem to support it more than argue against.


Now we come to today and the recent FAQ updates cleared up the mess [although not in the hoped for way:


Q: Are Tyranid units inside buildings (i.e. the Bastion) subject to instinctive behaviour tests?Furthermore, are they able to manual fire emplaced weapons or weapon emplacements?
A: No to both questions.


So this managed to plug the loophole for all us 'pro-activists'. However, whilst all this was going on my friends had contacted Warhammer World and ask the question [amongst others] and their response was that nids could still benefit from the autofire rule which confused me again because it brought us back to the part of the issue that stated quad guns didn't get auto-fire on an Aegis Defence Line, only in a building. So I wanted to resolve the matter once and for all, and contacted Warhammer World through their Facebook page so I could then move past the issue and just concentrate on a list worth using. I'm really pleased at the response, it may not be the answer I was hoping for but it was one that certainly implies they understand the difficulties we now find ourselves in.


Hey Dave - I have spoken to Simon and Jervis from Games Development (note - this isn't something we normally do, but given the pressing time limit, I went and did it!) and the answer is this - "Only emplaced weapons (such as those found on a Bastion or Fortress of Redemption) have the option to be fired either manually or automatically. Weapons attached to an Aegis defence line are gun emplacements, which cannot be fired automatically. The Tyranids FAQ document states that Tyranids cannot fire weapons manually, therefore as much as they are free to use Aegis defence lines, they will not benefit from any attached gun emplacements. We are, however, aware that this is a problem and will be reviewing the situation when we begin writing the next batch of FAQs in a few weeks." I hope that answers your question :) Nick

Ultimately though it begs the question what is the point in Tyranids? I'm not bemoaning my choice in using them but I'm really getting the feeling they've fallen out of favour. After Chaos, although some would claim ahead of Chaos, the Great Devourer is the biggest threat to the Imperium but the battlefield reality is they're just cannon-fodder. I've had great games with them and some of those have been balanced but I'm currently struggling to see them as masters of any type of fighting. They certainly don't scare any of my regular competitors and I'd imagine they'll be looked down upon the same at Throne of Skulls. Hopefully that will be the advantage I need - underestimation.

We can only hope that some of the rumours regarding new forces and changes to the Pyrovore rules will mean a rekindled love for the gribbly. The Codex is a long, long way from being looked at again, there's plenty more Codices due for update before nids get a look in but I think something has to give to try and make them stand equal in the eyes of gamers.


Lastly, if you ever need to ask a FAQ, here's the email to send it to: