The Storm Raven arrives and shoots up the HQ Tervigon with all sorts of kooky ammunition and rockets. First Blood and Slay the Warlord to Andrew. The second NDK kills the remaining Toxin Stealers despite Endurance and the Broodlord remains in the mix. I think the Doom was destroyed also, probably by the terminators advancing on the left. 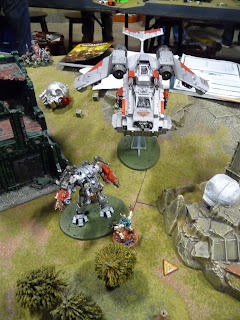 During my turn the Broodlord again Hypnotises the NDK and finally rends it to pieces, denying the Trygon once more. It consolidates back into the woods and the Trygon looks expectantly at the Storm Raven. With just 4 wounds the Doom fires Cataclysm but is denied only to suffer 3 Wounds for the privelege. The Devgaunts advance over the ADL and combined shooting with the Warriors puts down all but one of the Terminators. 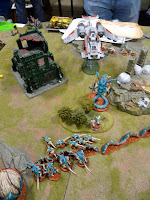 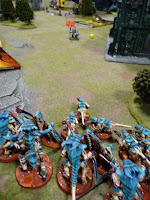 The Adrenal Stealers and Hormagaunts scuttle out of the fire arc of the Storm Raven still intent on securing Linebreaker. 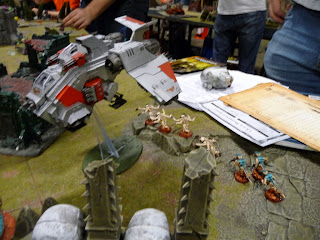 Storm Raven deploys terminator and Warlord squad in front of the Trygon and flys backwards to take a bead on the stealers with some Hurricane Bolters [oh yeah I forgot in can move!] and kills two. It unleashes more fire on the Trygon and puts 3 Wounds on it. 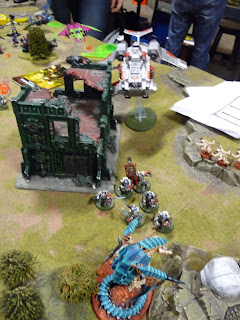 The Terminators assault the Trygon and thanks to a special banner doesn't have to roll to activate his force weapons - they're always on and slices the Trygon to death with one cut! 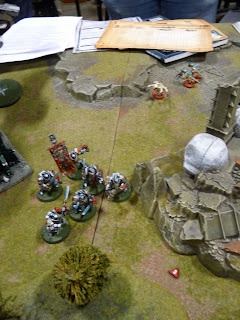 The Grey Knights get ready to take on the next mightiest creature. 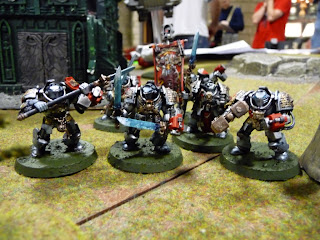 It comes round to my turn. and the Hormagaunt heads away to his board edge while the lone Stealer charges the now hovering Storm Raven and puts a glance and a rending hit on it. It's claws sink into an exposed plasma conduit and the resulting explosion vaporises the flyer and Stealer instantly [a VP each!]. In his turn he guns down the Hormagaunt denying Linebreaker and moves the sole surviving terminator back to save a kill point.

At this stage I think I've lost. He's taken so many VP's already and I realise the 'always on Force Weapons' are MC killers so I have a choice - skulk away or try to go all out... So the Troop Tervigon, Devgaunts and last Broodlord assault the Terminators [not before killing one through shooting, it may even have been the Hive Guard who did that]. I think they fail to do the business. Rad grenades make the Broodlord initiative 1 and the Terminators kill most everything 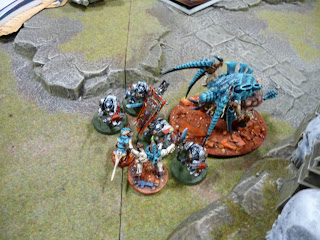 Meanwhile the Warriors advance on the rapidly retreating last Terminator from the right hand squad [chicken ;) ] The Barbed Strangler shoots wild and the Deathspitters wound five times but he makes every save. With nothing left I think the game ended with a final score of 10Vps to 3 :( 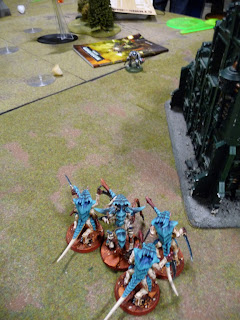 I'm not sure where I went wrong here. perhaps being too aggressive. Maybe if I'd have forced him to come to me and then picked when I wanted to assault would have been better. Certainly the Biomancy helped keep me alive. The ADL was only marginally useful just saving the lives of a few Devgaunts that I recall. Don;t remember much about what the Hive Guard did but certainly the deciding factor was plenty of rerolls to hit and wound for the Grey Knights and their Force Swords were the marked differences between fighting PeteB, although that's a smaller table and smaller force. Certainly plenty to share with him though about what worked.

Not a good start to the day but not something I was disappointed with, except for the Doom fail! Ha, ha.