Back when I was making the Tyranid Warrior - Hive Guard conversions, primarily out of a mixed goody bag of 'nid bits I needed a couple more Termagant heads and in true fashion won another mix of Hormagaunts and Termagants auction on ebay. Not sure how much this was in the end but it was probably better value than the five Termagants in a box you can get. Despite my love of Hormagaunts and their unwillingness to do anything other than get shot and fail to live up to their potential I decided to convert them to leaping Termagants. With two Tervigons now I need more spawnage, just in case. So with my extra fleshborers I knocked them up and also added Adrenal Glands so that they stand out even more as a unit. I've really started to notice how difficult it is to keep track of spawned units in 6th, so some ease of identification is helpful. 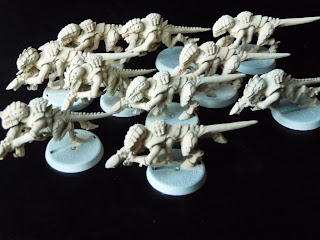 Of course Hormagaunts are some of THE most unstable miniatures ever created and if you place a gun in their hands, well lets say gravity takes an even greater interest in their face! I'm really going to have to start putting some weight on the back of these. 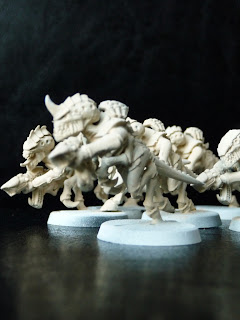 There were ten extra Termagants in this set. 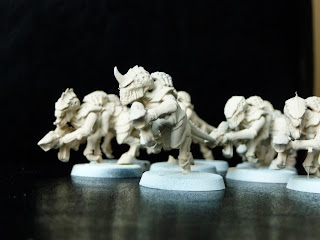 Of which four are based on Hormagaunt bodies with a fifth head on a Termagant, they really do break up the lines of the gant swarm, a little more vertical motion makes them look like they're jostling for position. 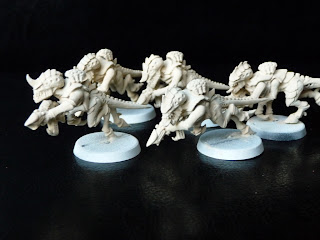 I also had another five vanilla Termagants to add to the previous five - 20 in total from these few ebay auctions. 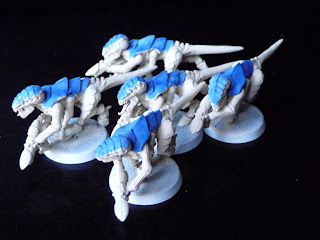 I've run the maths though and I'm not sure I'll ever need them all though. Currently I can use the second set of Devgaunts as spawned gaunts to help wit hsquad differentiation and so on average I should have enough. Only in exceptional circumstances should both Tervigons continue to spawn after turn 3, which invariably they do not will it be an issure and that's not taking into account that often they die and I get to recycle them into new units anyway. 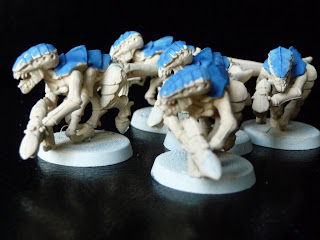