Over at the local friendly neighborhood gaming club there has been renewed interest in 40k. Warmachine has gone off the boil a bit and there's a Fantasy campaign underway so one of the guys - Gonders [who has an excellent blog you should check out] has put together a loose 40k campaign, starting with just 500pts and growing each month by 250pts. There are other restrictions:

1) Must include one HQ choice.
No more, no less. When this rule is removed, the second HQ option becomes open, and with it, so does the chance to take allies.
2) Must include one troops choice.
When this rule is removed, players will be forced to take a second compulsory troops choice.
3) No model my have better than a 3+ save.
This goes for both Armour, and invulnerable saves.
4)No weapons that can use the large blast templates.
Includes ordnance, and other effects, such as eldritch storm.
5) No vehicle may have a total Armour value or more than 33, including front/side/rear.
This makes the heaviest vehicle available at the start a devilfish transport.
6) No model may have more than 3 wounds.
7) No models with the flier special rule.
8) No psykers with a mastery level of higher than 1.

Of course that makes my list slightly difficult and easy - no Tervigon, Barbed Stranglers and I pretty much HAVE to take a Warrior squad to provide synapse along with the Prime. So my list was:

Now that's all out the way here's the game - Dawn of War, Purge the Alien, Gonders got first turn and I didn't steal. The only thing to note is the 10 man squad in the ruin top left and the five man squad in the Razorback. 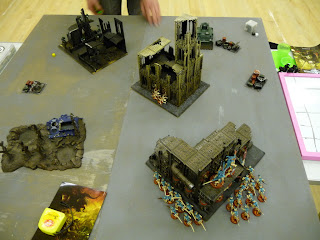 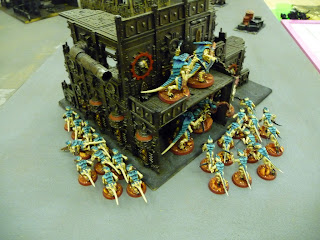 and the Stealers Infiltrated in the central ruin. 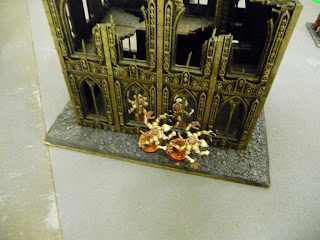 Gonders moved through the ruin and fired at the Stealers killing the two that were visible. 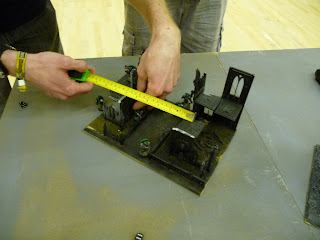 The Razorback trundled backwards [after this pic that is] and managed to target a stealer through the ruined window with it's Las Cannons but it was saved by cover. 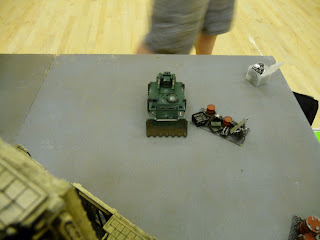 I moved forward, the Hive Guard stormed through the cover with a 6, fired at the Razorback but with a 1&2 failed to penetrate or even glance! The Stealers advanced through the building and were out of sight. 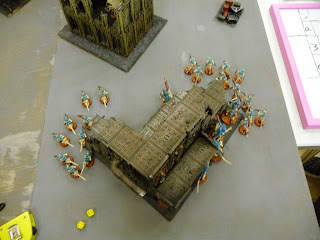 The Devgaunts advanced, hoping to reach cover but their run move falling short. Exposed, in Gonders next turn three of their numbers were killed through bolter fire. 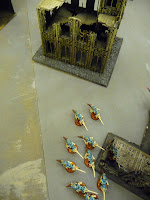 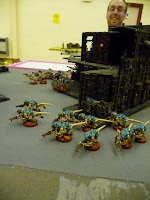 With little for the Dark Angels lack of targets my turn came around soon, the Hive Guard got a glancing hit on the Razorback after another storming move into cover. 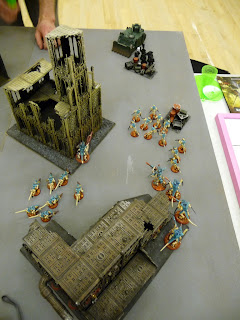 Everything else was out of range after their move forwards. 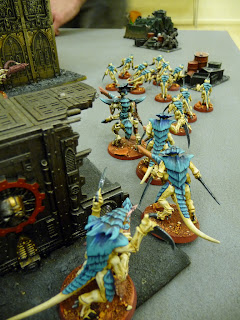 The Tac squad finally left the cover of the ruins... 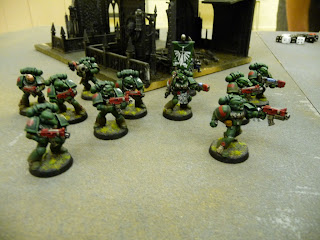 ... and were in range to do some serious damage to the Devgaunts. 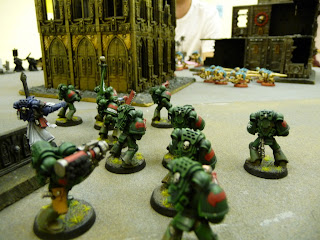 Leaving one solitary gaunt on his tod, but not for long as the Razorback drew a bead on him with his Las-cannons! To which I scoffed as he was vaporised only to be shown tactical genius as Gonders claimed first Blood! 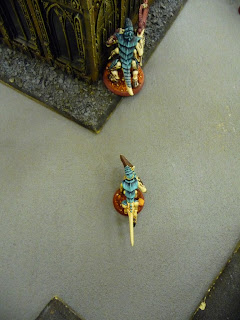 Bit of loss of pics here. The five man squad had disembarked from the Razorback earlier. Advanced, thrown a grenade at the Hormagaunts - killing five and then assaulting. I struck first and two marines went down. In return he killed four but we were locked. 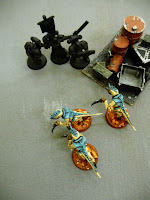 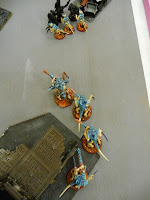 The Stealers charged the squad two more Marines were killed for one Hormagaunt. The front two Warriors fired at the Rhino but no damage, meanwhile the Hive Guard once again sprinted through difficult terrain only to shoot like girl ;) 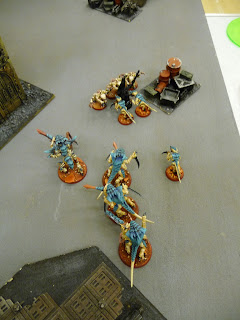 The Marine sergeant died in a frenzy of teeth and claws, the stealers consolidated 6" and the Hormagaunts 5". The Warriors took fire from the tac squad and Razorback but Look Out Sire saved the Prime [although we really do have to check how that works as other folk were playing it differently] 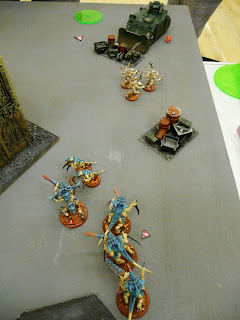 As you can see, 1 wound on the Prime and 2 on the Warrior. 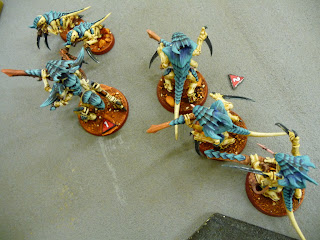 The Warriors moved to target the tac squad. Hormagaunts hid to deny a VP and the Hive Guard finally rocked up and shot the Razorback to pieces leaving the Stealers with nowhere to go but hang around in the backfield for Line Breaker. 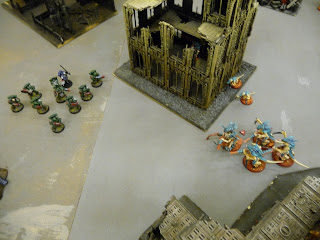 The marines returned fire but with some judicious position I was able to Look out Sir on a different Warrior for bolter shots and prevent Insta-kills with the Missile launcher on the Prime. 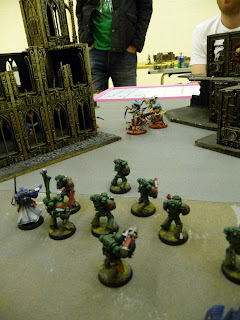 By this stage almost all the Warriors had been wounded and he had tried to gain Line Breaker. His Librarian had been casting the Overwatch on full BS in fear of the assault and this caused all the wounds. His Sergeant accepted a challenge by the Prime and was slaughtered. The remaining Warriors killed three more but they stuck at it. 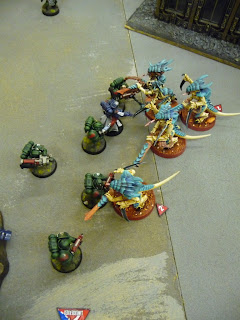 Another round of combat and the Librarian was duly challenged and slaughtered, two more Marines fell to the nids and they ran screaming, too quick for the Warriors but straight towards the stealers who had been crossing the back field. 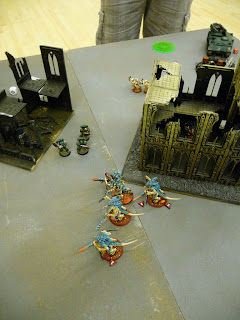 Even then they did not reach the awaiting gribblies as Deathspitters cut them down as they fled. 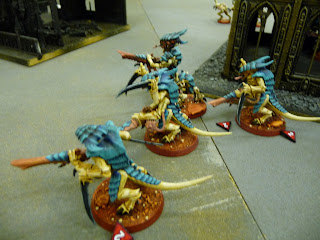 So it was a win from me but Gonders did some really neat things - using the Grenades, tactically using the right psychic power at the right time, taking First blood and heading for Line Breaker. I can't say my Devgaunts did much and the hive guard could run for Jamaica but wouldn't be allowed on the Great Britain shooting team! Not sure if I have an MVP but the bonesword is a beast of a weapon but I'm forever dismayed that he doesn't have the re-rolls for scything talons that the other Warriors have.

Still a good game and more to come no doubt.