I'll split these into two parts as they're a bit long winded otherwise, although I'll post them on consecutive days so you don't have to wait too long for the conclusion :)


Andrew Bruce brought a Grey Knight force to the table very similar to my mate PeteB's. I was quite confident despite the fact his deployment took less than about 2 minutes and the max VPs I could take were 5 plus Slay the Warlord, Line Breaker and First Blood [8 in total], whereas I was fielding 11 VP's without the bonuses!

He had twin Nemesis Dread Knights [NDKs] with Psycannons and Heavy Flamers, 2 Terminator Squads and a Storm Raven. I deployed second with the Aegis Defence Line mid way across the board - somewhere to take cover from [what? With those Flamers?]. The Adrenal Stealers infiltrated behind the Chaos Mound out of sight and hopefully out of range. No Tervigon was going to spawn as I didn't want to add to my uphill struggle on VP's. The MCs took cover behind the ruin and both Hive Guard were stationed on the second floor and out of sight. 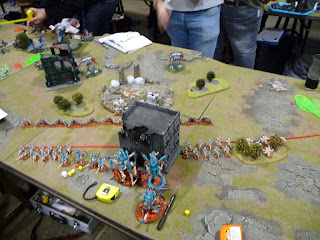 Andrew advances all his figures and took some shots, not sure if he did any damage due to range but it doesn't look like it. 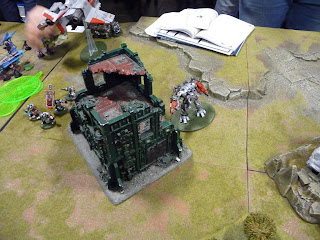 My turn and Hormagaunts and Warp Speed Adrenal Stealers charge for the NDK, backed up by the Trygon and Troop Tervigon. 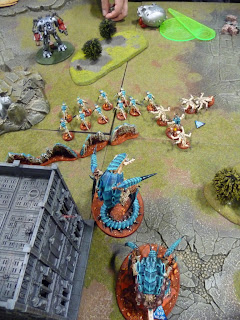 Devgaunts advance to cover behind the ADL, HQ Tervigon and Warriors advance in support of the Toxin Stealers. HQ Tervigon Endures the Stealers. 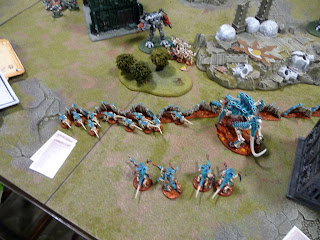 Hive Guard failed to do any damage to the NDK. Going second allowed the Toxin Stealers to assault the NDK. They survive overwatch thanks to Endurance, the Broodlord Hypnotises the NDK and manages to put one wound on it. 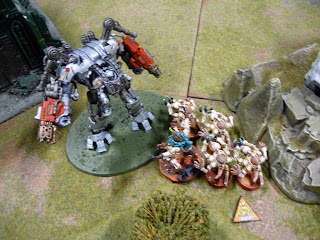 Devgaunts wait for their first victim. 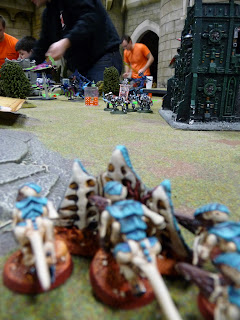 The NDK tries to win First Blood by killing the Hormagaunts but four survive, and I realise this will be significant in my turn. 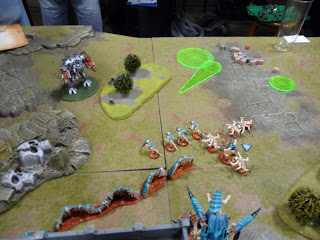 The other NDK pounds on the Stealers and kills one. 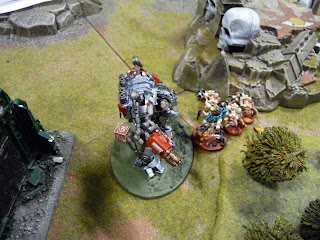 The Spore Pod arrives with the Doom and despite usually being bang on target is dropped 11" away from where I wanted it and next to my ADL :( I realise that the max overwatch fire an NDK can do is D3, so if the Hormagaunts charge I can lose 3 and still not lose First Blood and get the Adrenal Stealers into combat unscathed. I also manage to reach with the Trygon for a full on Battle Royale. The Broodlord on Warp Speed puts 2 wounds on the NDK who in return smashes him into the ground. 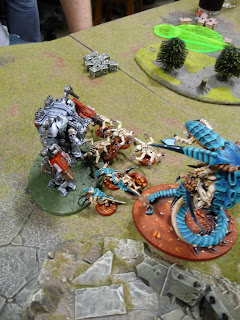 The Stealers then rip him to pieces before the Trygon gets a chance. All of the nids consolidate to the left and head for Line breaker [wishful thinking at this stage] with the Trygon going over the Chaos Mound in seach of the second NDK. 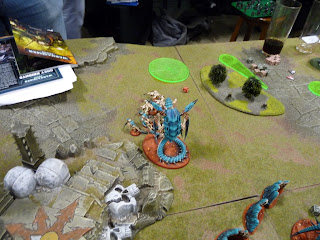