These are the last pics of my Warhammer World visit, not long now until Throne of Skulls with the guys. Anyway, as these pictures were mainly of my son and his games and he's spending most of the summer holidays just playing on his DS and computer I thought I'd get him to write down his thoughts of the weekend and the games he played. Well it's good for him, when I was on holidays and used to spend a few weeks at my Grandparents my Grandad used to give us sums and spelling tests on a daily basis. It may sound awful but I feel a better person because of it. So here it is my first guest post from my son, who's 10 so enjoy his efforts...

Me setting up my figures for the first game! 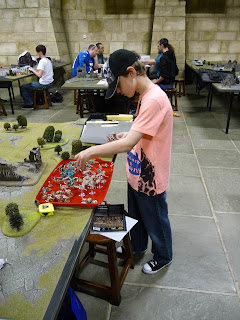 (I don't remember a lot of this, seeing as though it was the first battle)

One of the things, which was hard was finding one of the objectives, he'd hidden it behind some trees with some marines all around it. He won, 2-3 to him. 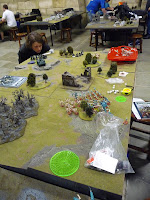 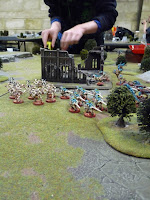 Tyranids - Game 2
(Unfortunately my Dad didn't take any pictures of this battle as he was on another table.)

This battle I remember the most, seeing as though it was Tyranids V Tyranids, I reckoned he would know about synapse. I had only 2 synapse creatures a Hive Tyrant and a Tyranid Prime, he had 3, two Zoanthropes and one Hive Tyrant with wings. I had the prime with the hourmgaunts, my genestealers infiltrated towards one Zoanthrope, which blasted them to pieces when it had the chance and the Hive Tyrant swooped over to help. The only survivor was the broodlord, who miraculously survived the whole game. Most of my hourmgaunts got wiped out leaving the Prime and two gaunts left, and they started to fall back to the table edge. I forgot that when tyranids are in synapse range, they're fearless, but the gaunts and prime reqrouped 2" from the board edge. I didn't win, but apparently the Imperial Guards tricked the Tyranids into thinking that one fleet insulted the Hive mind, and then the IG nuked them. 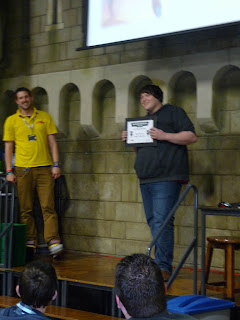 This game was quite hard, the Thousands Sons were shooting lightning, as was the Chaos Sorcerer. So I decided to get my troops in cover. The Tyrant didn't do much, it just shot whatever shot it. 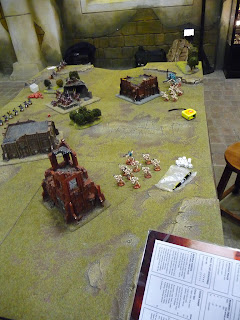 My reinforcements have just come in but my Genestealers with broodlord have had casualties. The tyranid prime comes on with the hourmogaunts, and has his eyes on the Chaos Sorcerer. 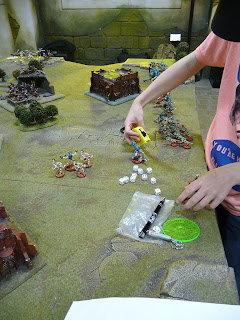 The Prime makes it into charging range of the Sorcerer and charges, the Prime had twin boneswords meaning that if the defender has an unsaved wound, he must take a leadership test, if he fails, then it is instant death! So the Prime charges, attacks, and the sorcerer gets an unsaved wound! He fails his leadership and it is goodbye sorcerer. The broodlord is the only survivor again. Eventually, I get wiped out, leaving only the Biovore, and then the game finished. 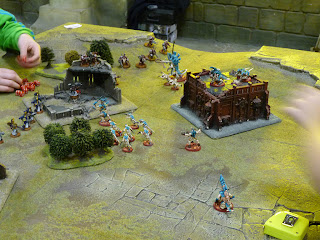 We had the awards ceremony last, and the winner of the Single best painted miniature was my contestant on battle 2 with a commissar. The seasiders won! (Blackpool and Southport) And I got some Dire Avengers for my Eldar which were £21, whereas my Dad spent £5 on a bunch of heavy weapons for his heavy weapons squad. 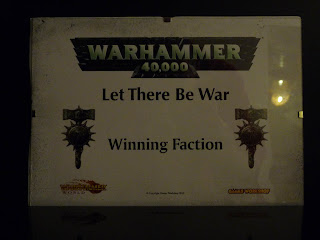